Alternate uniforms have become a normal part of the pageantry that is college football. After exhibiting increasingly unusual and flashy combinations for several years, teams and apparel companies appeared to take a more conservative approach during the 2017 season, with Florida’s “swamp green” uniforms being a notable exception.

While football fashion is mostly about fun and selling swag to fans, at the College Football Uniform Study we’ve been exploring the performance side of alternate uniforms. Earlier we found evidence that alternate uniforms can be either motivating or distracting, depending on the team and circumstances.  That uniform choices might have some influence on performance shouldn’t be too surprising. After all, this is a sport where coaches are constantly looking for an edge. In fact, the 2017 season produced one of the sport’s most memorable apparel-related motivators – the University of Miami “turnover chain.” The turnover chain wasn’t the only motivational accessory of the season, but it was the highest profile and produced arguably the best results.

A recent article by ESPN’s David Hale indicates that most coaches’ efforts to influence turnovers produce few measurable results, but outliers like Miami and the turnover chain suggest that, when the right “fit” of coach and culture come together, a gimmick can impact performance. Miami Defensive Coordinator Manny Diaz was already emphasizing the need for his defense to cause fumbles and interceptions, but when he created the turnover chain his players had a new motivation to pay attention and give consistent effort at practice. As the chain gained notoriety, Diaz noted that opponents also started paying attention. “The more the chain was emphasized, the more other teams were talking about not turning the ball over, and the more the turnovers came. It felt psychologically [like] it created more of an issue for our opponents."

The turnover chain and other “sideline incentives” can come into play at any point in a game and can be especially powerful when they coincide with a momentum swing (like a key turnover). Alternate uniforms, however, motivate largely the week before the game, as the players anticipate playing in them, or at the beginning of a game when the players and/or crowd are pumped up by the unusual uniforms. As we suggested in an earlier article, there is evidence that any motivational impact of alternate uniforms is spent by the first quarter.

One similarity between alternate uniforms and the turnover chain is that context matters. For instance, the turnover chain would be a hollow reward for a player in a game that Miami was losing badly where the outcome was no longer in doubt. As for alternate uniforms, if the coach knows how to use the uniform for motivation, if the players are excited about wearing the uniform and if the crowd is pumped up by the change, then the uniform can provide an extra bump in energy at practice the week before the game or at the beginning of the game. But that is a lot of “ifs.” Thus, we expect that most alternate uniforms won’t provide much help.

At the College Football Uniform Study, we analyzed three years of data (2014-2016) from all of the regular season games of Power 5 conference teams. Overall, alternate uniforms negatively impacted performance. In fact, in home games Power 5 teams scored about one fewer point against the spread, on average. Away alternates were even worse, with teams averaging about two fewer points against the spread. While alternates can be fun for players and fans, they don’t help the average team play any better.

But are there some teams, like Miami with the turnover chain, where alternates work especially well? Yes! The top 5 performers in alternate uniforms are listed below. 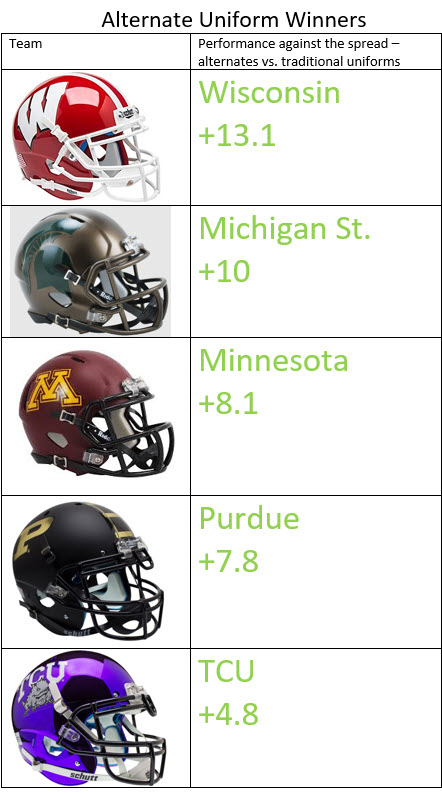 Strangely, the top four best performing teams hail from the Big Ten conference. Our earlier work indicated there may be some regional variation in the effectiveness of alternates (the SEC fared poorly compared with non-SEC national powers) and this reinforces that conclusion.

What about teams that fare poorly in alternates? The bottom five performers are listed below. 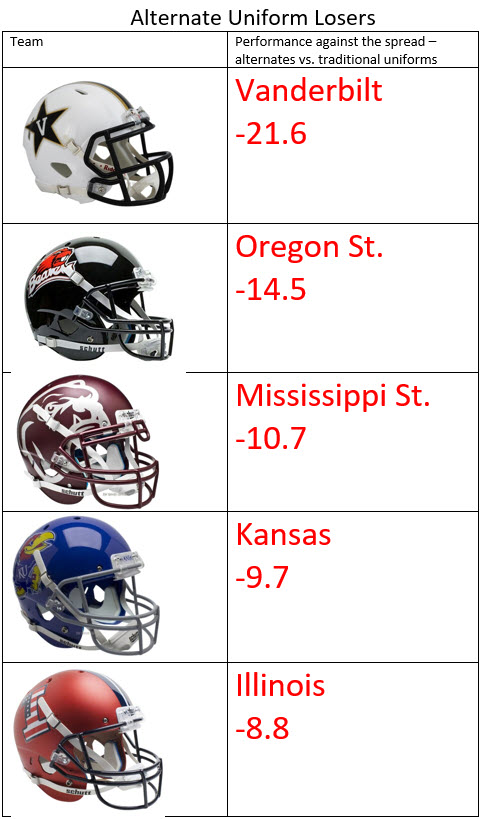 There weren’t any clear regional patterns to the alternate uniform losers, but one interesting trend is that three of the bottom five teams experienced a coaching change during the three-year study period. When expanding to look at the bottom ten teams, seven of the bottom ten experienced coaching changes. This trend may have little to do with alternate uniforms and more to do with how difficult it is to predict performance around coaching changes. Still, these teams did perform much worse in alternates over the study period. It is possible that coaches on the “hot seat” are more likely to (unsuccessfully) try gimmicks to motivate their teams or that new coaches change uniform patterns in order to put their brand on the program, even if performance isn’t yet improved. 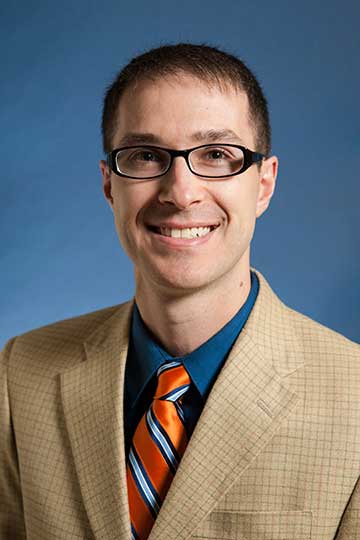 Charles E. (Chuck) Stokes is associate professor of Sociology at Samford University. Chuck’s love for sports was nurtured by playing youth sports and watching Clemson football while growing up in South Carolina. As a faculty fellow of the Center for Sports Analytics, Chuck launched the College Football Uniform Study (CFUS) to study how sports apparel can influence performance.