Every college sports fan knows that one of the best feelings you can have is watching your team on television and seeing a small number to the left of their name, indicating a top 25 ranking. It’s an immediate look into the nationwide perception of the team you follow and any prospective national championship/bowl game possibilities. Two of the most popular polls are the AP Poll, voted on by members of the media, and the Coaches Poll, voted on by a random selection of coaches (or some equipment manager if the coach doesn’t want to take the time to fill it out). While the college football playoff ranking poll carries more weight, it doesn’t begin putting out polls until week 10. Both the AP and Coaches do preseason as well as final polls, and the AP is used on TV until the CFB Playoff rankings come out. Because the AP posts preseason and final rankings, I wanted to see if they systemically overrated or underrated certain conferences or teams. The following tables and charts look at data from the last five years of polls (2013-17). 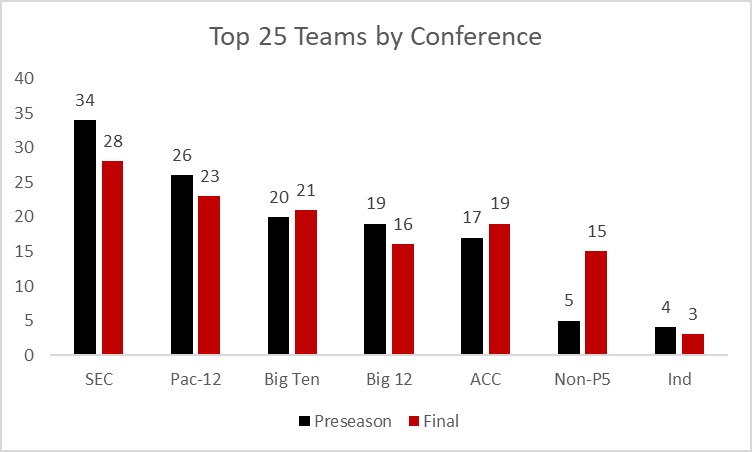 Over the past few years, the Southeastern Conference (SEC) has established a reputation as being the toughest and most competitive conference in football. The polls tend to agree as the SEC has had the most teams in the preseason and final top 25 polls over the last five years. While most conferences decreased by a few teams from the beginning of the season to the end, the clear exception was in non-Power 5 schools. The number of non-P5 schools tripled in the final poll compared to the preseason poll. There’s so much unknown outside of the big conferences that it is difficult to predict who will rise to the top, and the poll is most likely not confident enough to pick one of those teams without seeing proven success. This idea is reinforced by how many teams are not ranked during the preseason that are ranked at the end of the season and is shown in this table. For instance, among the teams that were ranked in the final AP poll for non-P5 schools, 86.7% of them were not ranked to start the season.  Because the SEC had the lowest percentage at 27.6%, this implies that the media generally knows who the good teams were going to be to start the season and that it was the conference with the fewest “surprise” teams that exceeded expectations by becoming ranked.

Similar to how some conferences were over or undervalued, certain teams faced the same scrutiny from the polls. To avoid looking at teams that only had success for one or two years, I limited the sample to teams that were on the preseason or final top 25 for at least four of the five years I looked at. This left me with the list of 16 schools seen below. The points are based off the rank assigned to the team, with a first-place vote getting 25 points, second 24, etc. 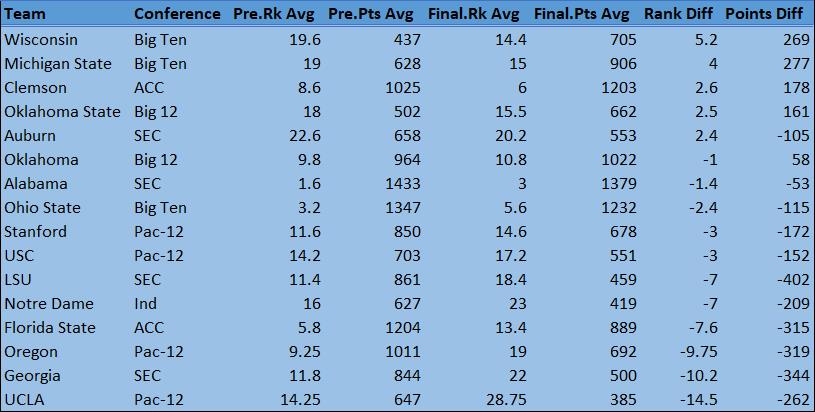 Based on preseason rank vs. final rank, Wisconsin was the most underrated (they finished about 5 slots higher than in the preseason) and UCLA was the most overrated (finishing almost 15 spots lower). Another of the more overrated teams was Florida State, especially because of their preseason ranking being so high at 5.6 and finishing at 13.4.  Alabama is also extremely impressive for averaging a preseason rank of 1.6 (1,1,1,2,3 each year) and still finishing at an average of 3. 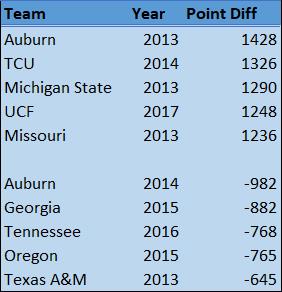 Each year there have been teams who have widely exceeded or failed to meet expectations. This is easiest measured in terms of point difference from the preseason to the final poll. Auburn had the most and least impressive seasons by this measure. This past season, UCF finished 13-0 after beginning the season unranked. For a roster that doesn’t attract the level of talent of schools as a non-Power 5 conference, their Peach Bowl win over 10th ranked Auburn and undefeated record was one of the more surprising and memorable seasons in recent memory. 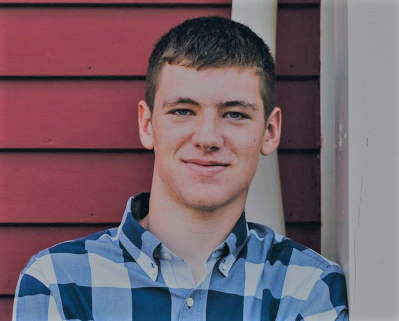