Esports may just be the next big thing. With the way the internet shapes trends these days, video games such as Counter Strike and Fortnite can be sources of extreme cash flow. According to Forbes, “the marketing researcher is predicting 2018 revenues to hit $905 million, a staggering 38% increase from 2017’s $655 million. Brand investment in Esports is expected to make a significant impact with an increase of 48% year-over-year.” With numbers like this it’s not hard to see why people are starting to jump into the Esports industry.

Esports, for those of you who don’t know, is live events of video games. These events are done on LAN, which is a classical way of connecting computers, so the audience can watch their favorite players and teams compete right in front of them. A lot of Esports content is found on Twitch or YouTube for now. Many people enjoy watching the competition from their phone or computer but would anyone actually go to the live event? There’s events all over the world and they are usually held in major cities at convention centers. It’s clear that the fan base is their according to his Forbes quote, “It offers a certainty of participating teams, ensuring that large fan bases are not lost when a team relegates.” But that still leaves us with whether or not any people would go to the live events. It’s the same endless question just like watching a basketball game on tv or in person, which is better? 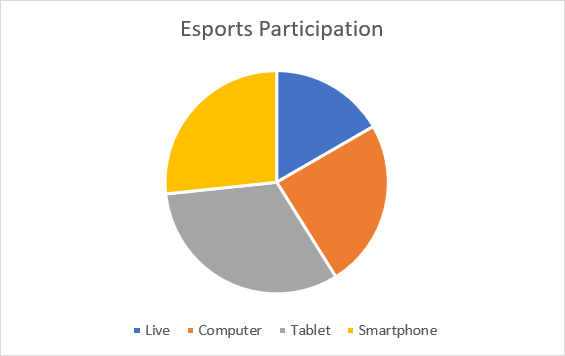 According to this graph, almost no viewers come to the live events compared to the other viewers online. This is due to many things. Usually the events are too far away and not everyone can afford to fly out to a gaming event. Secondly, people just don’t yet know about Esports enough for the viewership to be very high at this point. Thirdly, Esports is very trendy. Esports is dependent on what games are popular at the time and sometimes that can be bad for viewership. For example, now that counter strike isn’t quite as popular as it used to be, Esports will lose a lot of viewers just since the game is being phased out.

In my opinion, watching an Esports event live would be very fun but it wouldn’t be the best way to experience the event. From a viewing perspective, you can pick and choose your view at home on the computer in Esports. But at the live event the camera crews pick the angles. If you are at home watching you can follow your favorite player around and that’s fine. But if you are at the live event, you are forced to watch it from a different perspective. At the live event however, you get to see the players and feel like a part of the whole team. It does seem though that Esports needs to find a different way to complete the viewing experience. Clearly, they need to get more live events viewers because at the moment almost all of Esports viewers are online. Esports could gather so much more revenue if that many people actually came to the live events.

Esports is something unlike any other because the audience has so much of a connection with the players and teams. Every day, thousands of people watch live streams, comment, message and consume media from their favorite teams and players even when events aren’t being held. The “athletes” in Esports are at such a great place to be able to interact with fans and make people enjoy the sport even more. But at the same time, you miss out on the rapid-fire connection with the players and teams without your smart phone or computer, so at the live events you may be left feeling like you are missing something.

In conclusion, Esports is growing very fast and now would be a good time to gain interest in Esports, however it has some problems that its facing. It needs to gain more live viewership and just gain more popularity in general. It also needs to gather bigger sponsors and sponsors from brands outside of the gaming/software community. This will further put Esports in the spotlight and make the industry grow even more.