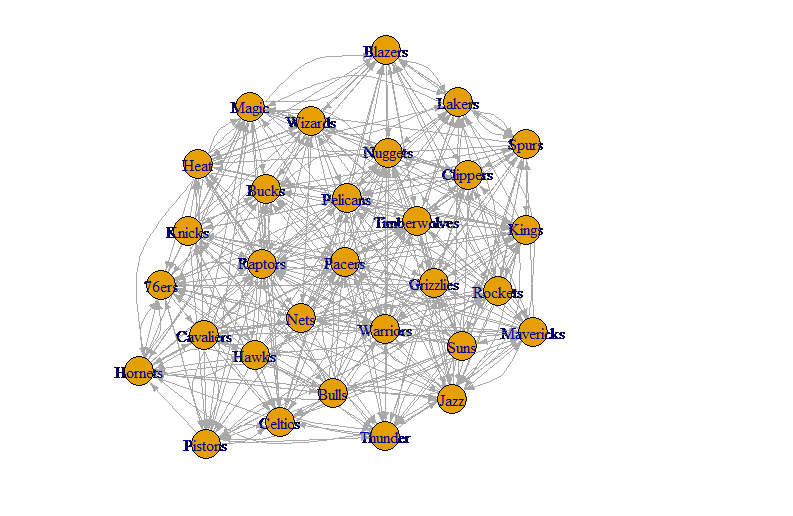 Though experts have tried their hands at several ways to rank NBA teams over the years, my go-to method of PageRank for any sport’s rankings is simply the most aesthetic. Google’s PageRank network algorithm is no less than a work of art, albeit not one that is beyond the scope of a layman’s understanding. Let me first explain it in straightforward terms.

The only input PageRank will ever need is wins and losses. There is no home crowd or point differential consideration. It is simplistic in the sense that it excludes almost all variables except the one that matters most – which team won against which. It creates a directed network where each team is given one node. If, for example, the Lakers beat the Warriors, an arrow will point from the Warriors’ node to the Lakers’ node. Now the weight of this arrow, though equivalent to one point, is not the same for each arrow. The importance of this arrow will depend upon how many teams the Warriors have already beaten, meaning how many arrows are pointing towards the Warriors’ node. Then, the value of those arrows will be determined from what nodes they came from, and so on. Essentially, every arrow is tied to every arrow. Every victory impacts every loss, and vice versa. The resulting network, Figure A, is exquisite.  The beauty of this ranking is that it does not matter what the pre-tournament standings were. What matters is how any team performed among the network of other teams within the tournament.

We then simply use this network to rank the teams. This is where PageRank comes in. Now, what this algorithm does is take this directed network and its weights into account, and outputs a probability for each team. This probability is purely the likelihood of an arrow pointing from any node to a particular node. We then compare these probabilities, align them in order, and find out which teams stand the best chance of winning.

The Value of the PageRank Metric

Now, if you blinked and missed some of that information, you must think PageRank is all about counting wins and losses. But it is not quite that simple. It is a measure of the quality of the opposition you are beating, based on a network that is created within the duration of that tournament. Your pre-season rankings, players, point differentials, or home crowd advantages will not matter. All that matters is whether the team you are winning or losing from is winning or losing from other teams, and so on. This method, in fact, becomes foolproof for a tournament where every team has to play every team at least once.

Following is the Ranking obtained through PageRank in comparison with the current standings of the NBA (up to December 5, 2018). 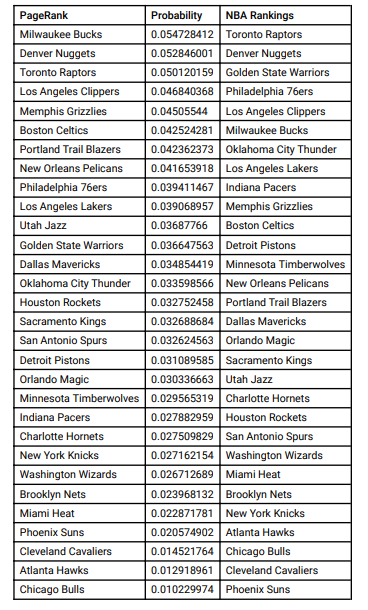 Perhaps this ranking system is not the easiest one to digest for conventional basketball fans (especially the Warriors’ ones). However, this is not a system for replacing the existing one. It is fundamentally another way of looking at the tournament, from a purely algorithmic point of view. The reason Warriors are featuring far below their NBA rank is most likely due to the fact that the arrows pointing towards them do not hold the same kind of weight that the 76ers or Clippers do.

How Do I Read the Probabilities?

As for the probabilities, they indicate the probability of an arrow inside this network pointing towards a specific team. So, the highest probability would mean that this particular team is most likely to win as compared to any team and FROM any team as well. It is more of a comparative tool, since this is a network approach.

We should view this algorithmic mechanism as just that. A mechanism. It is a way to implement a bit of Mathematics to allow the existence of more than just the conventional perspective. It is a keen methodology of challenging our one-dimensional thought process as sports fans. It is nothing more or less than a bit of data presenting some turbulence in our sporting ranks.

This is, after all, the age of data.

About the Author: Fatima Sajid 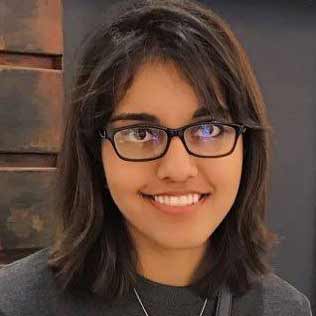 Fatima is an Economics undergraduate student of Lahore University of Management Sciences (LUMS) in Punjab, Pakistan with an interest in data science. She has a passion for applying advanced analytical techniques in the sports of basketball, baseball, and cricket. She also enjoys finding creative algorithmic techniques that are applicable to these three sports.