High Ticket Prices and the Secondary Market: Do the Jets have the right idea?

With the NFL season quickly approaching, being a loyal fan has its costs. The ticket industry, which can often cause headaches an undue stress in a variety of ways, is a growing issue. How much will it cost for you to see your favorite professional football team play this upcoming season? Being that ticket prices throughout the sports industry have been constantly rising in recent years, game day experiences are becoming almost unattainable for some fans. The sheer cost alone, not to mention the limited supply for games, is leading many to see the ticket buying process as undesirable. Many sports fanatics are growing more content watching a game in the comfort of their own home, rather than spending excessive amounts on a ticket and fighting through crowds just to experience the atmosphere of a live game.

High ticket prices can be the product of factors such as fraudulent sales and the rise of a secondary market. This secondary market is driven by the laws of supply and demand – due to a limited supply, ticket scalpers can charge premium rates for the ability to get into the game. Add the fact of higher prices with the risks of possibly getting a fake ticket, and it’s no wonder why buying sports tickets has become an increasingly painful experience for some fans.

The New York Jets, announced in 2018 its new sales strategy for the upcoming season. The chart addresses Jets attendance from 2006 – 2017. Attendance had remained flat for over three years attracting a steady fan base of 625,280 to Metlife stadium. However, attendance in 2017 dropped by nearly 5,000. 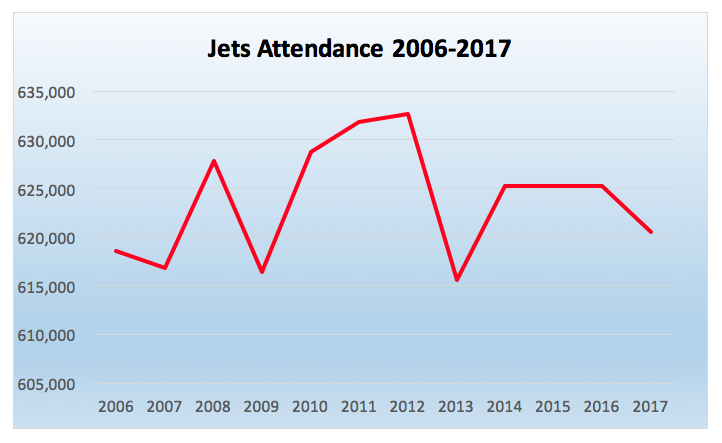 The drop in attendance signaled that the franchise needed to make a change. The Jets announced in early 2018 a new sales strategy, which utilizes dynamic ticket pricing for the upcoming season. With this new strategy, ticket prices will fluctuate depending on the price index. The good news for fans – this means ticket prices will either remain the same or decrease by as much as 11 percent. The idea behind the dynamic pricing strategy is to allow for price fluctuations to match the ever-changing market, with the end result being more affordable tickets for fans.

Factors the Jets will have to account for when pricing tickets include the opponent, New York’s entertainment district activity, and the resell value on the secondary market. One might pose the question of whether or not a decrease in ticket price would result in the franchise losing revenue, but the flip side to that argument would be the lower priced tickets could draw more fans to the stadium. Also, attracting more fans to the stadium results in more earnings from other revenue streams like parking, concessions and memorabilia. Do the Jets have the right idea with their ticket pricing strategy, and could it potentially alleviate some pressure brought about in the secondary markets; or, is there a better idea to be found elsewhere?

Maybe the The National Football League (NFL) has a better idea when it comes to tackling the issues surrounding the ticketing process for fans in the world of sports. The league recently signed a deal with SeatGeek, in order to promote its new ticketing strategy in the 2018-2019 season. The deal will allow fans to buy and sell through an online league approved ecosystem platform. Statistics for the Jets show decline in ticket sales, which can often leave a franchise wondering why sales are declining and what they can do to remedy the downward trend. The NFL believes the move to an open ticketing system will, “provide teams with a range of real-time insights on where tickets are traded and who is attending games.” The league hopes the new technology will help eliminate fraudulent activity in the secondary market by making it easier to verify tickets being sold, which will in turn draw more fans back into the stands.

Along with reducing prices, the Jets intend to focus on enhancing season ticket holders’ experiences in order to entice PLS members to attend games rather than selling their tickets on the secondary market. Some ways the Jets intend to do this include offering season ticket holders bonus experiences like free breakfast on game day and tickets to other events in the New York area. The tickets to other events in the New York area could range from anything such as the NFL Experience in Times Square to Mets games or concerts. As previously mentioned, the new technology that will be provided through the NFL’s deal with SeatGeek could provide the Jets with real-time data to see what is truly working and what isn’t.

It is reasonable to believe the rise in the secondary market place was a driving factor behind the NFL’s deal with SeatGeek. Allowing an outside ticket source to integrate and control all of the league’s ticket transactions will help to eliminate the exploiting of fans through fraudulent ticket sales, all while making the ticket buying process easier and more convenient. Seeing as how the New York Jets original plan to use a dynamic ticket pricing strategy might not even result in ticket prices being much lower than they currently are, utilizing the NFL’s new platform and way of thinking would prove to be much more beneficial. This sounds like a win for all parties involved.