How FIFA Will Lose Out with the USA’s Absence

On October 10, 2017, the U.S. Men’s National Team had their 2018 FIFA World Cup hopes crushed by a 2-1 loss to Trinidad and Tobago. Along with it, soccer fans around the U.S. were distraught after a strong showing in the 2014 World Cup that was highlighted by a second-place finish in the “Group of Death” led them to believe that bigger and better things were on the rise for U.S. soccer. Although Americans have had over six months to stomach this blow, the biggest hit so far may be coming to FIFA itself and the lucrative opportunities that come with having the U.S. featured on the global stage.

This is the first time since 1986 that the USMNT will be absent from the FIFA World Cup. Despite this the U.S. still bought the second-most tickets of any country (80,161) with only the host country of Russia ahead of them with a whopping 796,875 tickets. This amount of attendance to the World Cup is not unheard of however, the past two world cups have featured the U.S. as the second most populous country in attendance. In 2010 in South Africa, the organizing committee reported that more than 130,000 of the tickets were purchased by U.S. residents. Of the 2.8 million overall that were sold for the 2010 FIFA World Cup, around 4.6% came from America. In 2014, the U.S. bought an astounding 196,838 tickets. This number was more than 100,000 more than that of the third-place country (Argentina with 61,021). 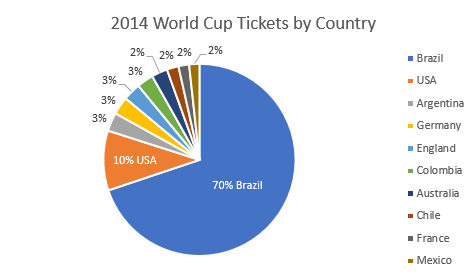 Although the number of tickets bought by U.S. residents for the 2018 World Cup is not a number to laugh at, it’s an extreme drop from what FIFA is used to receiving.

In 2014, four of the ten most watched U.S. broadcasts of the World Cup featured the United States. Three of those games weren’t even in the knockout round as they came inside of the group stage. The only two non-U.S. games in the top-5 were the final between Germany and Argentina (1) as well as the Round of 16 match between Mexico and the Netherlands (4). The most watched U.S. game was the U.S. v Portugal match which totaled 19.8 million viewers across all networks but incredibly, this match had only around three million less viewers than the World Cup Final (22.7 million). 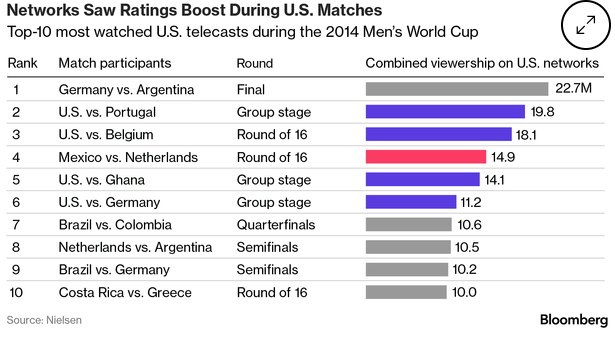 These numbers spell trouble for both FOX and Telemundo who own the rights to the World Cup and they spent over $400 million and $600 million respectively to do so. They show that American fans are only likely to watch in mass numbers if they’re playing, not out of interest alone. Not only that, these numbers could have a ripple effect that will carry over to FIFA. Overall less viewers will see the spectacle that the World Cup is and FIFA in turn misses out on a huge growing market in the U.S. without the attendance of the USMNT.

For the first World Cup in memory, FIFA has struggled to find sponsors and partners for the 2018 FIFA World Cup. Now for the most part, companies are hesitant to sponsor an organization that has recently been shown to be highly corrupt. However, it’s interesting to note what companies have stuck by FIFA and what new companies have joined. In 2014, FIFA had six total partners: Adidas, Coca-Cola, Emirates, Hyundai Kia Motors, Sony and Visa. As of 2018, they have seven however there have been changes. Adidas, Coca-Cola, Hyundai Kia Motors and Visa have remained, but Qatar Airways, Wanda Group and Gazprom are all new. All the new partners that have joined are not American and even more, are either based out of the host’s region or are based out of a future host region (Qatar).

As for the sponsors, the field from 2014 has dwindled from eight to five. Although the only two companies that renewed their sponsorship are American, (Budweiser and McDonald’s) they also lost one of the only new American sponsors added in the past few world cups (Johnson and Johnson) after just one tournament. To me, this is more than just companies wanting to stay away from corruption, but strictly American companies do not want to sponsor a tournament in which the USMNT is not represented and ratings are sure to be lower.