How Mercedes Benz Stadium is Changing the Game

Now a days, when fans attend sporting events they are practically having to fork out an entire down payment. Sporting events are not cheap, they have turned into a complete luxury for many people. For a family of four on average it cost over $500 to attend an NFL game (O’Brien). Getting into the stadium is half the battle, but once inside the spending just continues. 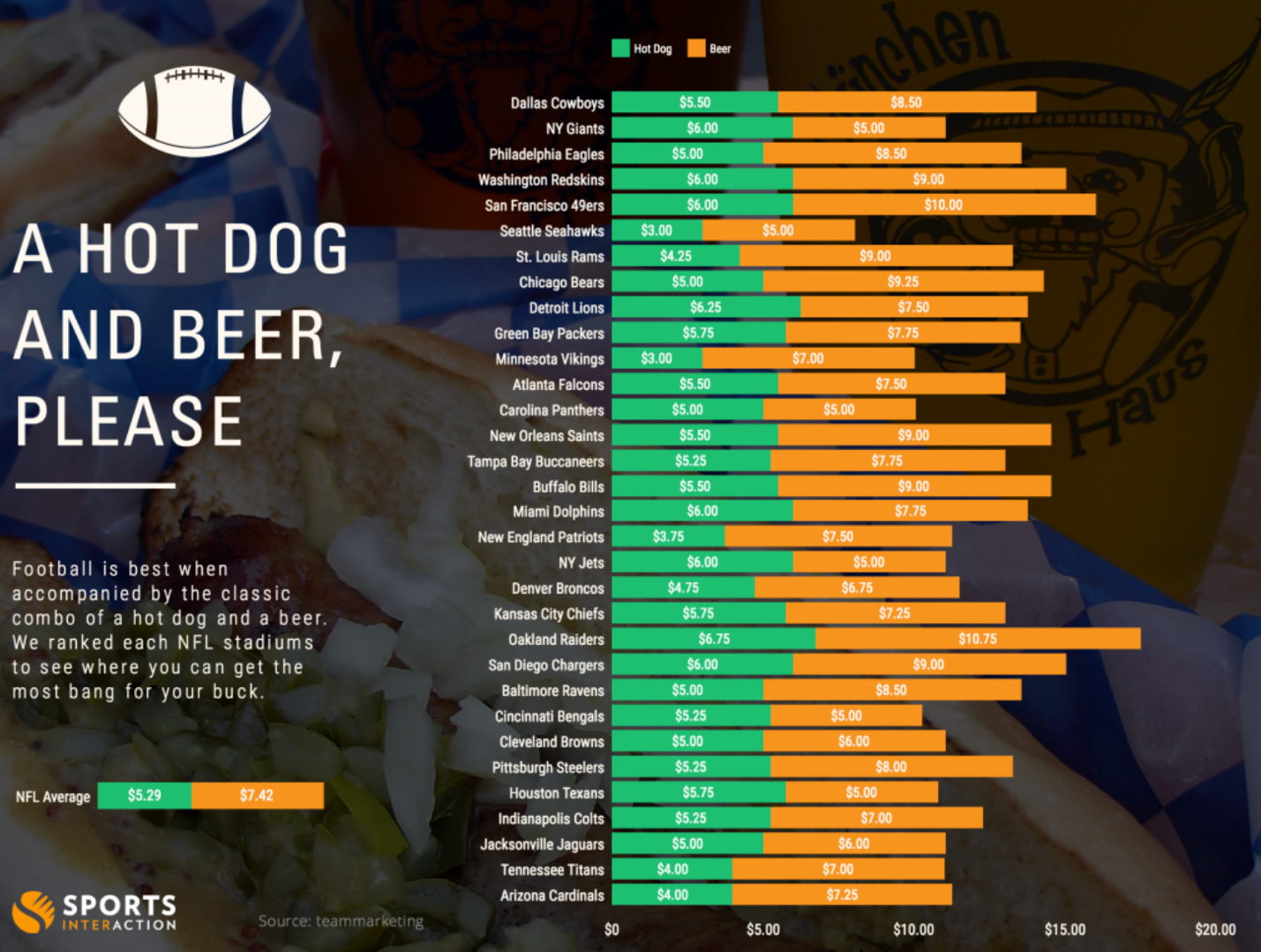 Above is a graph showing what two of the most classic things to order from the concessions stand at a game, a hotdog and a beer, cost at each NFL stadium. The prices range from a $3 hotdog to a $6.75 hotdog; while beer prices range from $5 to $10.75. Meaning on average a hotdog cost $5.29 and a beer cost $7.42 at an NFL game (Schultz). These prices are outrageous, but when there are no other vendors to choose from, fans are forced to either pay the steep prices the stadium is asking for or wait until after the game to eat and drink.

With prices being high across the board not only in the NFL but also among all professional sports, the Atlanta Falcons wanted to make a change when opening the new Mercedes Benz stadium. The AMB Group, which owns the Atlanta Falcons as well as Atlanta United, decided they would take on a new approach when it came to food and beverage sales. According to the CEO of the group, Steve Cannon, “the organization believes that by charging less, they will make up for the difference in pure volume” (Schultz). The price drops in food and beverage that the stadium has made puts the stadium at 60-70 percent cheaper than other NFL stadiums food and beverage prices (Schultz). 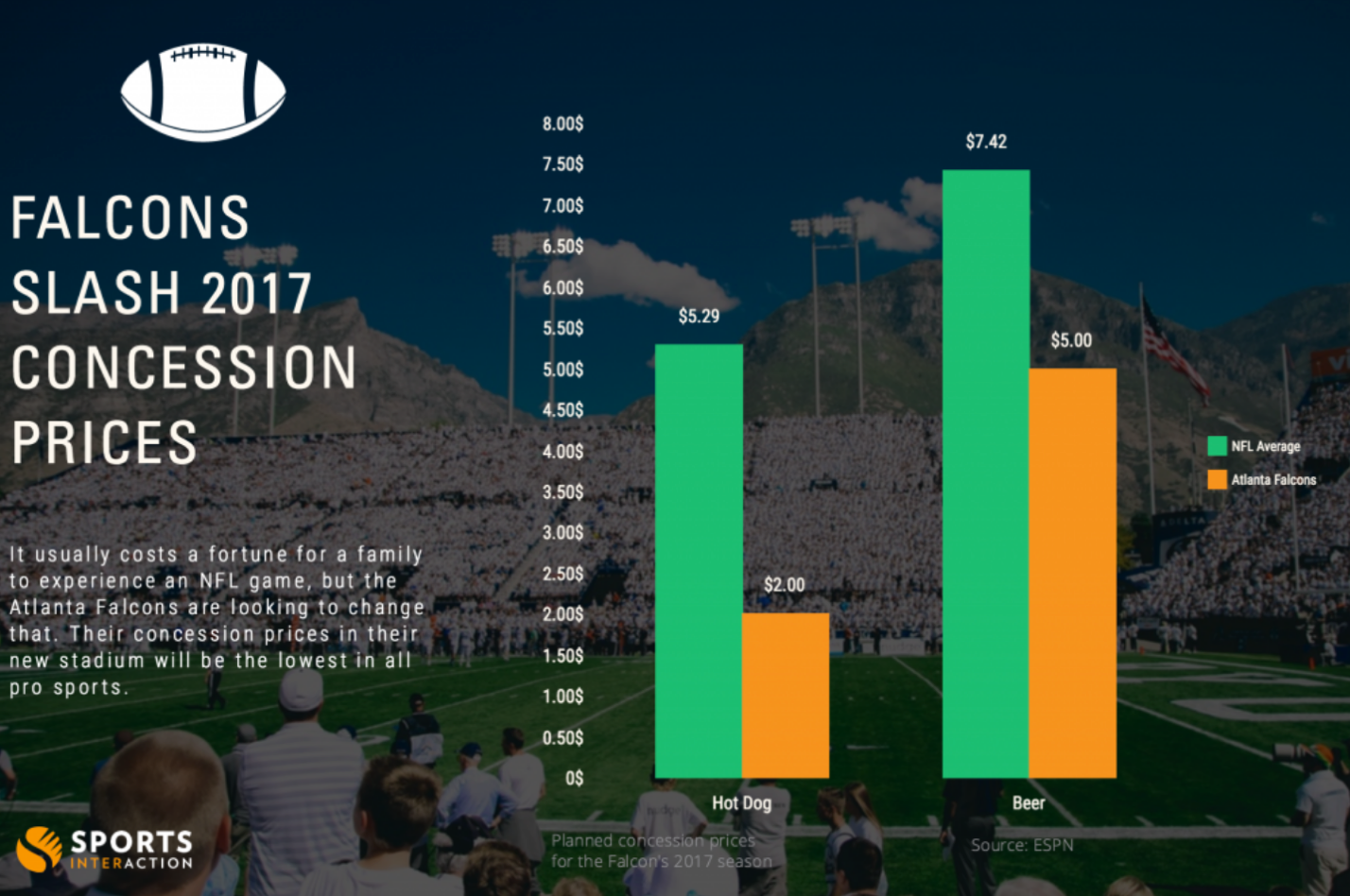 In 2017 the Falcons had their first season in the new Mercedes Benz stadium, and above were the prices the stadium sold hotdogs and beers at compared to the NFL average (Schultz). So how did the stadium do in sales? Was making the calculated change worth it? Well, it depends on how you look at it. Cannon said “the team made less on concessions in 2017 than it did the year before” (Novy-Williams).

However, the prices will be staying the same at Mercedes Benz stadium. Just because they did not offset the price drop in year one, does not mean that this change was a bust. In the 2017 season, food sales for the team were up by 53% as well as being up 16% for the average a fan spent on concessions (Novy-Williams). Fans were coming into the stadium earlier and spending more time at concessions (Novy-Williams). All of these things not only are helping bring in more sales, but are helping increase the fan experience at Mercedes Benz.

Fans have been really pleased with the drop in prices, showing this by “ranking Mercedes Benz as #1 in team quality, value, speed of service and variety” (Belson). I would not be surprised if other teams and stadiums start to adopt the Falcons new method with food and beverage prices. According to Cannon, “several team owners and venues have called asking for more details on the pricing strategy” (Novy-Williams). Hopefully, this is good news to fans as their wallet will be able to take a break when heading into at least Mercedes Benz stadium from now on.

This blog post was written by Samford University Student Brooke Jenkins. You can learn more about Brooke and her passion for sports at https://www.linkedin.com/in/brookejenkins22/ .