In Defense of the Three: The Boston Celtics

In the 2017-2018 NBA season, the Boston Celtics were the best team at defending against the three-point shot in the league. In the regular season, teams shot 33.7% from three against them, compared to the league average of 36.2%. Boston made a concerted effort to defend against the three, and it started with the strategy implemented by the team’s head coach, Brad Stevens, and the team constructed by general manager, Danny Ainge. Over Stevens’ first five seasons, the Celtics have been top five in defensive 3-point percentage every season and finished this year ranked first. The Celtics were successful in defending the three because of their consistency in contesting three-point shots and their ability to force their opponents into taking the lowest percentage of threes on the court. As Ken Pomeroy, creator of kenpom.com and an influential member of the basketball analytics community, wrote: “while three-point defense exists on some level, it’s difficult to distinguish how much is sneaky close-out ability and how much is opposing offenses choosing to take low-percentage 3’s over low-percentage 2’s” (Pomeroy). Boston was able to excel in both of these areas better than the rest of the league.

In the NBA, a contested shot is any time a “defensive player or team closes out and raises a hand to contest a shot prior to its release” within 3.5 feet of the shooter (Stat Glossary). This kind of play is more a measure of effort and emphasis on it by coaching than anything else. Boston contested 83% of the threes shot against them this season, good for third in the league. When contesting a shot, the taller a player is and the longer the wingspan of the player, the more effective the contest will be. 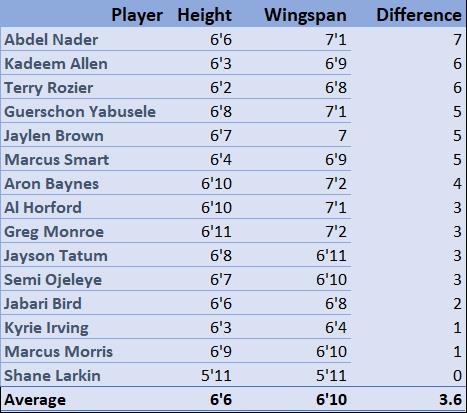 This table shows all of the Celtics from last season heights, wingspan, and the difference. The top six players in difference were all been drafted by Danny Ainge and the Celtics in the last four years, and all of these players, except for Yabusele, are guards who have more threes attempted against them than big men. This combination of effort and length makes it uncomfortable for their opponents to get off easy three pointers. Because of their efforts in closing out, the Celtics were ranked first in defensive three-point percentage (D3FG%) against catch and shoot shots off zero dribbles (35.4%) and from holding the ball from zero to two seconds (34.9%). These are the most taken three-point shots, and often the easiest to make.

Another area the Celtics excel in is forcing their opponents into lower percentage shooting areas. The NBA three-point line is 22 feet in the corners and 23.75 ft from above the corners. This past year, teams averaged 39.4% from the corners and 35.6% from above the ark. One explanation why the Celtics were so successful this past season was that they limited the number of corner threes, the easiest three on the court, that their opponents could take. Boston was only 23rd in D3FG% against the corners at 40.7%, but first against threes above the break at 32.5%. The reason they finished as the best defensive three-point team was that out of the threes the other team attempted, Boston had the lowest percentage of corner threes against them at only 19.7%. This can be attributed to the coaching of Brad Stevens to focus on preventing shooters from getting to these areas and driving them out to areas further away from the basket to make the shots more difficult.

Against the Cleveland Cavaliers in the Eastern Conference Finals, the Celtics were able to continue doing much of what made them so successful on defense during the regular season. However, it wasn’t enough as Boston fell to Cleveland in seven games. Boston was able to closely guard the three-point line and made Cleveland take less shots from the corners (8.6 regular season vs. 6.6 against Celtics) then they did in the regular season. 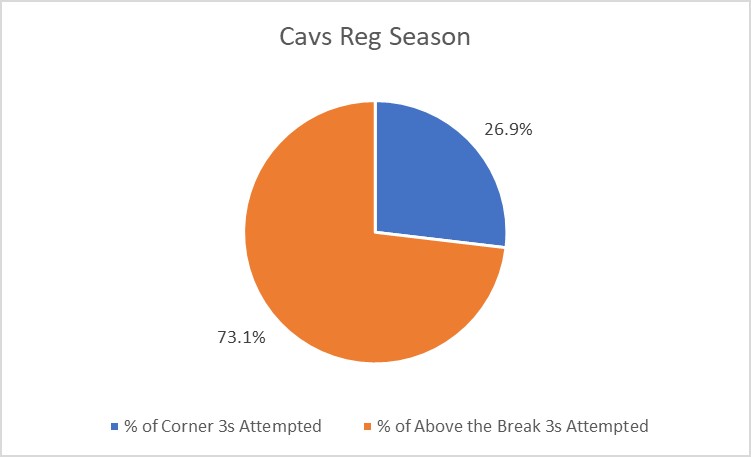 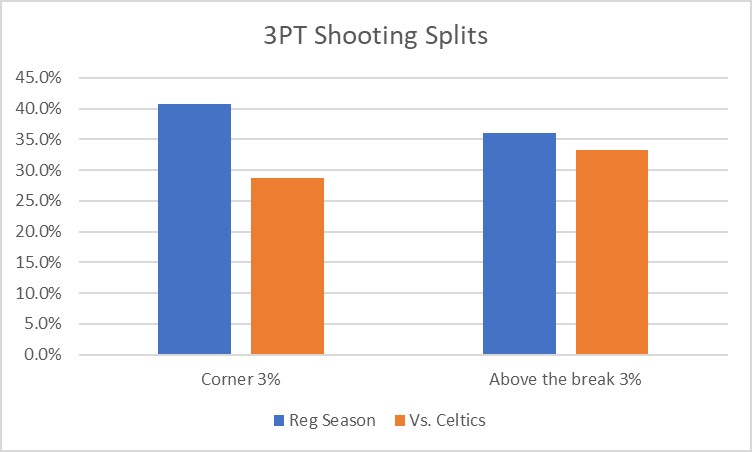 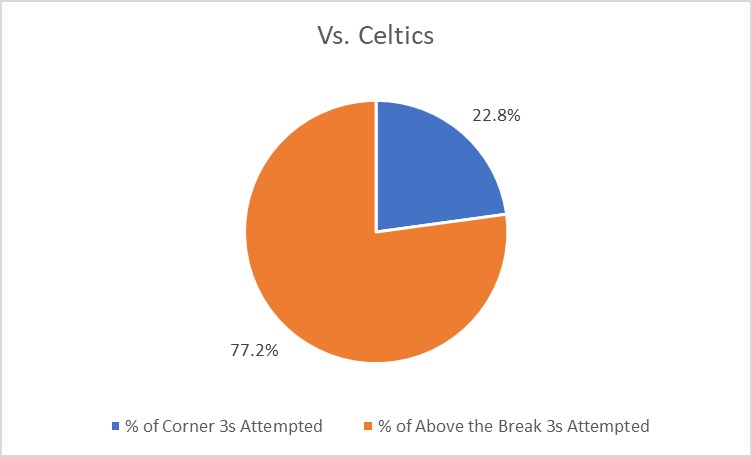 The danger with emphasizing a defense strategy of protecting the three-point line is that it usually involves a lot of switching on defense whenever someone is screened. In a pick and roll situation, the switched defender can immediately challenge the ball handler and prevent them from getting an open shot. The Celtics are built to switch with players like Marcus Smart, Jaylen Brown, Jayson Tatum, and Marcus Morris all being able to guard multiple positions. Even big men like Al Horford and Aron Baynes have the ability to stay with quicker guards.

The issue the Celtics came across was that Cavs would switch until they got Lebron James on Terry Rozier, or another of the Celtics smaller/weaker players, and attack them in the post. Boston would rarely send the help that Rozier needed, unlike the Warriors in the finals. Golden State switches everything similarly to the Celtics, but when Lebron was isolated on Steph Curry, they would immediately send help defenders and rotate. The Celtics problem was that they were too concerned with guarding the other Cavaliers around the perimeter to help with the initial attack of Lebron, and when they did help, they didn’t rotate or recover quickly enough.

While the Celtics were good against the three this year, they could be even better with the return of Gordon Hayward from injury. Last July coach Stevens said, "I don’t have the five positions anymore. It may be as simple as three positions now, where you’re either a ball-handler, a wing or a big” (Goldberg). The past few seasons, the Celtics have shown an affinity for wings who can guard multiple positions, drafting the 6’7 Brown, 6’8 Tatum, and signing the 6’8 Hayward in free agency. With Hayward returning from injury, look for the Celtics to run a lineup with Kyrie Irving at “ball-handler”, Brown, Hayward, and Tatum at “Wing,” and Al Horford as the “big.” If Stevens wants an elite defensive unit, look for him to substitute Smart for Irving. A Smart, Brown, Hayward, Tatum, Horford lineup is extremely switchable at every position and would be one of the best defensive lineups in the league, especially against the three.

Nick is a rising junior at the University of South Carolina double majoring in Statistics and Sports Management. He is looking to pursue a career in the NBA after graduation.