Since that day, U.S. national anthem protests at NFL games have become a major topic, not only in the sports world but also throughout the country.  Many other players on the 49ers and other NFL teams have decided to also protest perceived racism in the United States.  These protests and the NFL's failure to properly address the situation have led to a severe dilemma that the NFL is facing.  Coincidence or not, the anthem kneeling protests have coincided with a significant decline in TV ratings and attendance at some NFL games. So, the question is: has the NFL's failure to act on a situation lead to a good portion of their fanbase feeling that the protests not only disrespect our military but also our country; and has this perceived disrespect been the reason fewer people are watching NFL games both on TV and in the stadium?

In 1996, the NBA faced a similar type of player protest when Mahmoud Abdul-Rauf of the Denver Nuggets would not stand for the national anthem before an NBA game.  Abdul-Rauf, who was previously known as Chris Jackson prior to converting to Islam and changing his name, had a similar protest to Kaepernick as “he believed the American flag was a symbol of oppression” (Travis, 2018).  Unlike the NFL, the NBA had rules requiring players, coaches, and trainers to stand during the national anthem.  Also, unlike the NFL, the NBA acted quickly to diffuse the situation and suspended the Denver Nuggets guard indefinitely and fined him $32,000 (the same amount he made per game).  With this, the protest ended swiftly, and there have been no publicized issues regarding NBA players for over twenty years.

Unlike the NBA, the NFL has no stated requirement for their players to stand during the national anthem; however, had they addressed the situation, would it have been diffused immediately like it was in the NBA?  If so, would the decline of viewership of the NFL have been as evident and drastic?

Since the protests started in 2016, statistics show that NFL viewership has declined.  According to Neilson, NFL viewership declined by 8% during the 2016 season (compared to the 2015 season) and another 9.7% in 2017 (compared to the 2016 season) when random anthem protests continued throughout several NFL stadiums.  To give a better idea of what these numbers actually look like, a typical NFL game in 2017 was watched by 14.9 million viewers compared to 16.5 million the previous year.  That is 1.6 million fewer people watching the NFL per game in just one year (Rovell, 2018).

Viewership numbers during the entire 2017 NFL Postseason further support the declining viewership.  Every NFL Postseason game from the Wild Card round through the Super Bowl show a decline in viewership when compared to the game played in the same time window during the previous Postseason. 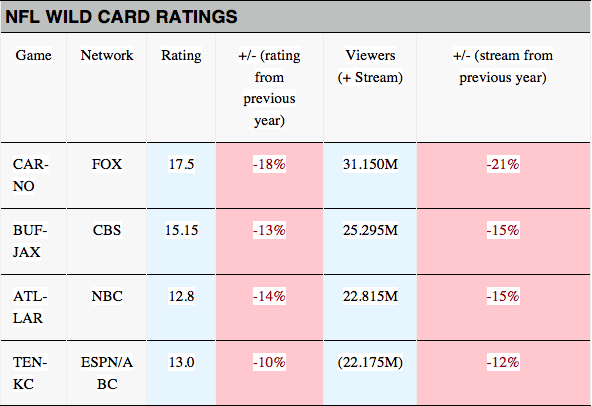 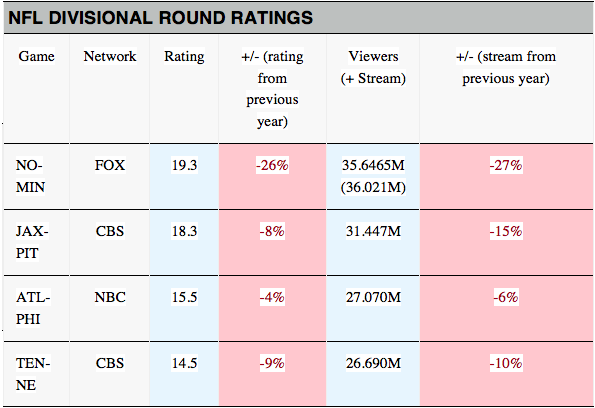 To sum up these charts, every rating and number of viewers dropped in number from 2016 to 2017.  These are the years that the protests began.  Could this just be a coincidence?

The NFL says that the cause of the decreased ratings cannot be directly contributed to the anthem protest. They cite a number of factors, including more homes cutting their paid TV among other things.  However, only one game from the 2017 Postseason referenced was on a cable network.  Also, the reduction in cable households has not seemed to affect NBA ratings, which according to Forbes.com their ratings were up across all four networks (ABC, TNT, ESPN, and NBA TV) when compared to last season.  In addition, the 2017-2018 season was the highest rated season in five years for the NBA (Adgate, 2018).

Consequences could follow the decline in viewership according to Fox Sports.  Revenue is obviously being lost because of the decrease in viewership and attendance, but the NFL’s four TV partners stand to lose almost $500 million in revenue (Travis, 2017).  While TV contracts are long-term if ratings do not return this will surely cost the NFL millions (if not billions) of dollars when the contracts are renegotiated.

We may never know if the decline in viewership is directly related to the protests, but it is quite coincidental. These two factors occurred around the same time, and data and evidence support that the NFL ratings have seemed to decline because of the protests. The NFL is going to continue to make it seem like a coincidence in order to save their brand image and to try not to lose any more revenue, but even their official statements that try to prove this theory wrong have been proven false by facts. Even the NFL does not have a logical answer besides the anthem protests. If something does not soon change, the NFL may continue seeing a decline in ratings and viewership.

This blog post was written by Samford University student Kelsi Hobbs.  You can learn more about Kelsi Hobbs at https://www.linkedin.com/in/kelsi-hobbs/.