Is the NBA Salary Cap Getting Out of Hand?

NBA free agency began last week, and it’s been a wild one. Lebron James left Cleveland for a second time, this time heading to LA to rejuvenate the “Showtime” Lakers with a four-year, $154M deal. DeAndre Jordan on the other hand left the Clippers to head to Dallas with a one-year, $24.1M deal. The most surprising move so far however, was DeMarcus “Boogie” Cousins signing a one-year, $5.3M contract to have a potential starting five of five all stars in the bay. Why is it though that in the NBA we have seen an uprising of super teams, but not in other sports? The Yankees are the closest thing to a super team in Major League Baseball, and the NFL has never really had one.

This could be for a few reasons. With fewer players on an NBA roster (13) as opposed to an NFL roster (53) or MLB (40), there is more money in the salary cap to go around and recruit star talent every year. Another reason is that basketball is an easier game to plug and play athletes into new rosters whereas in the NFL you must build up chemistry 365 days a year. Although the NFL has the biggest salary cap in sports, the growth of the NBA’s salary cap could be one of the biggest reasons these super teams continue to get built. 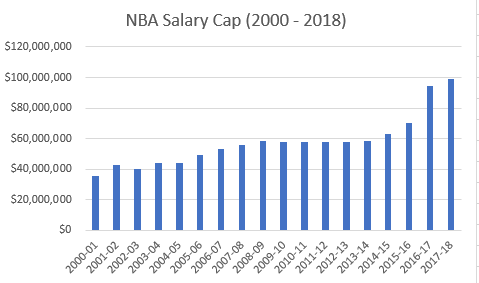 Just from the turn of the century to now, the NBA salary cap has increased by around 179%. A lot of this recent increase in the salary cap is from the TV deal signed in 2014 by the NBA. The $24 billion-dollar deal didn’t take affect until the 2016-2017 year single handedly pushed the cap up around $20 million. This allowed for more max contracts by teams as well as the ability to fit a lot of stars and talent into one team.

It’s no question that across all sports leagues, salaries for athletes are rising, often to controversial figures, quickly. 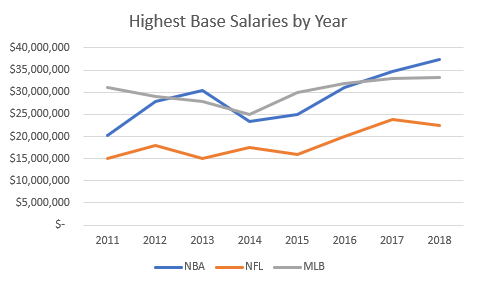 Above, you can see that besides a dip in 2014, the NBA highest salary per year has been on the rise. Steph Curry holds the current largest contract at a whopping $37.45 million in 2018. In fact, the highest payed player in the NFL in 2018, Kirk Cousins, is making $22.5 million but that would only rank 36th highest if he were in the NBA as far as base salaries go.

The salary cap jump has increased the highest yearly base salary in the NBA by 84.8% since 2011, the NFL and MLB have only increased 50% and 7.25% in the same time. The NBA doesn’t just lead in highest contracts either. At the start of this season, the average MLB player was making $4.52 million compared to the $5.75 million that the average NBA player made last season. Along with that, the top forty-one payed players in the NBA are making at least $20 million next season alone.

One plus for the NBA is that since no new TV deal will be on the table for a few more years, the salary cap isn’t likely to take another big jump for a while. There are current problems and more problems will arise in the future if the league office is unable to negotiate it down in future collective-bargaining talks. The biggest and most obvious problem right now is super teams. Because of the inflated salary cap, teams can amass super stars without any of them taking too much of a pay cut. The Warriors are set to pay five players (Steph Curry, Kevin Durant, Klay Thompson, Draymond Green and Andre Iguodala) more than $15 million apiece next year.

Another problem that has begun as well is the so called “lack of loyalty” in the NBA. Players now are unlikely to stay committed to the team that drafted them due to mid-tier players in the league getting max contracts. With so much movement of players, it’s hard for weaker teams to have a rebuild process and it keeps competitive teams strong as the free agent talent wants to join a playoff team.