Lacrosse has been long been referred to as the fastest game on two legs. This physically demanding, high contact, and fast paced game is without a doubt one of the fastest growing sports in North America. With total players growing from 1.2 million players in 2007, to an impressive 2.9 million in 2017. The presence of lacrosse is fast becoming a mainstay in the athletic world.

As a former lacrosse player, I have enjoyed the sport immensely throughout middle school and high school. I continue to follow my high school team’s progress even four years after I last touched the field.

To someone who has never played the sport before, the rules are the most confusing part of the game. The gameplay however, is very simple and highly entertaining. Lacrosse is a high scoring game and often, games comes down to the very last seconds. The fan appeal of this sport is very high, as it captivates the audience all four quarters.

As with many fast-growing movements, trends, or organizations, this growth has the potential to be lopsided. This lopsidedness manifests in the sense of demographics, support, and even how many participate in different regions. Lacrosse is no exception to this idea of lopsided growth. Looking at data from the Sports Marketing Analytics organization, this divide become very evident.

As shown in the chart above, Lacrosse is played mainly by 12-17 year olds. This comes as no surprise because Lacrosse is predominately a high school and middle school sport. The downside of a young player base is in the support for the game. The young player base ultimately should translate into a future fan base. These young players turned fans would not have the same monetary resources as their parents, and therefore hinders growth of teams in the short-term horizon. This is also encouraging for the sport, because the long-term growth potential is extremely strong and malleable. If retailers could find a strong foothold in the young generations, the loyalty and support that resulted would be monumental. 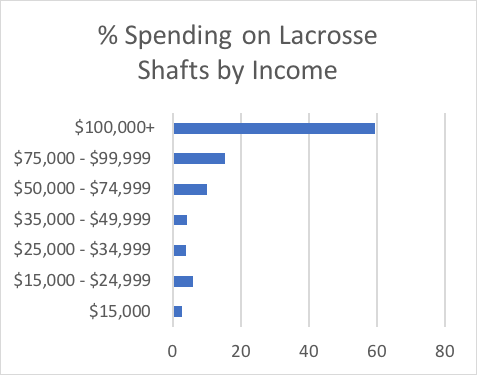 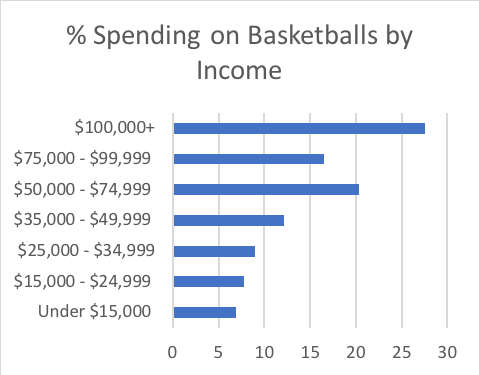 From initial glances at the chart, it becomes evident that lacrosse spending is done almost exclusively by families with annual incomes over $100,000. Spending on basketballs is much more evenly distributed throughout income levels.

Going back to the issues associated with lopsided growth, according to this data, lacrosse is living up too its reputation as a sport for the wealthy. Lacrosse gear is expensive with a set of pads, helmet, and shaft, and head costing upwards of $300 on the lowend and $1000+ on the highend. This barrier to entry into the sport is perhaps the main reason families with $100,000+ income make up 60% of players for the past ten years.

Having a heavy concentration of wealthy families has potential upsides, but also carries threats for the lacrosse industry. The main benefit is the lack of price sensitivity, especially when the lacrosse gear serves as a status symbol among the players. Your lacrosse stick, or “spoon” in lax terms, serves as an extention of your personalilty. Cutomizing string color, head color, shaft material, and even the type of tapejob. All of these products are expensive, but are viewed as a neccesity by players.

The downside of having a non-diverse market are endless, but the main downside is in untapped potential or opportunity cost. With basketball, for example, every income level spends money purchasing basketballs. This spending unifies fans through a common thread. Once invested in the sport, no matter the vested level, consumers are more likely to become fans of the sport. These fans, by extension, are more likely to support college, pro, and even amatuer teams. This is where lacrosse falls short, because without a unified fan base, the growth of the sport could be severely hindered.

Potential for the Sport

After examination of both the lopsided nature of the age of participants and the income of participants, it is important to take a step back and reflect. Without a doubt, there is lopsided growth in age, and in income for the sport of lacrosse. But, who is to blame for this, and how can this be fixed? The solution may lay in the influence of the retailers.

The power of brand perception should not be under estimated, especially with a young and impressionable player based like lacrosse. Solidifying brand loyalty with young consumers could translate into a lifetime of support.

As shown above, lacrosse gear is purchased in store. This is interesting considering the rising trend of online retail. The benefit of this is having visual appeal in store through displays, video, or special events/ demonstrations. Having lacrosse manufacturers such as Warrior, Nike, or, STX recognize this potential is key to growing the sport.

The sport of lacrosse is, without a doubt, fast growing. This growth has been shown to be lopsided in age and income. A result of this lopsided growth is seen in retail not following trends of the market moving to online retail instead of store front. This forces the retailers to focus their marketing in different ways than online.

If lacrosse is to continue is rapid growth, the spending by families under $100,000 income must increase and more teams for ages over 17 must increase. The expansion of pro teams and college teams will be the result of these inclusionary efforts. Through this inclusive, sustainable, and well balanced growth; the future of lacrosse for will be secure generations to come.