People have been talking about how the NFL is declining in attendance, but the sport that is really in trouble is the MLB. The MLB declining in attendance along with TV ratings, which are not as bad as their attendance, but it is still below other sports like the NFL. The MLB has many different issues that has started its decline. These issues include the length of the game, the number of games, and the problem of the young generation. Both aspects of attendance and TV ratings in the MLB are declining and not as good as they should be, and the numbers prove it.

Attendance is hard to increase or even maintain in the MLB. Attendance hasn’t been this bad in awhile as Christine Brennan reports in her USA Today Sports article, “Attendance dropped by 4 percent this season, falling under 70 million for the first time since 2003. There was some terrible weather that led to a season total of 54 postponements, the most since 1989, but whatever you want to blame, going backwards 15 years for an attendance comparison is not a good development for any sports league” (Brennan). The number of games, 162 in total which means 81 home games for each team, results in a hard time to get a lot of people to every game. Even though attendance is dropping for MLB as a whole, some teams are thriving in attendance. For example, teams like the Dodgers, Yankees, and Astros, along with 10 other teams, attracted more fans in 2018 to games compared to 2017 (figure from McClung at bottom of page). Specifically two teams, the Phillies and Brewers, had higher than a 10% change from last year to this year. As a whole though, the MLB is struggling with attendance. Since 13 teams maintained or increased in attendance, the other 17 teams experienced a decline. The bad thing about the teams that had a decline in attendance, most of these declines were very large. Teams like the Blue Jays, Rangers, Royals, Marlins, Pirates, and Orioles had a negative percent change over 10%. So compared to two positive teams that were plus 10%, there are six teams that have a negative 10% (McClung).

Next we have the TV ratings, which are adequate but not as good as other sports like the NFL and NBA. The problems with the TV ratings is that some games last too long in the evening, kids are not wanting to be MLB players as much as they used to, and they have to compete with different shows and sports. Kids and even young adults are not watching baseball as much as they used to. The figure above from sports marketing analytics that shows the percentage of ages that watch baseball on TV. People below the age of 34 are decreasing in how much they watch baseball on TV, which needs to change to help the sport. The best example is what happened Monday night. Baseball had its best opportunity to have a high TV rating game. “Going head to head with a midseason NFL game, MLB gave it its best shot: Game 3 of the series to end all series, the Boston Red Sox-New York Yankees American League Division Series from Yankee Stadium, tied at one game apiece” (Brennan). Even with Red Sox at Yankees in Game 3 of the ALDS, the Monday Night Football game between the Saints and Redskins, which had Drew Brees record breaking game, doubled the attendance of the baseball game. Game 3 of the ALDS had 4.41 million viewers while the football game had 10.6 million views (Brennan). This reflects how tough competition can be for a sport like baseball and also reflects how all shows have competition of viewers whether it is sporting events or other shows. 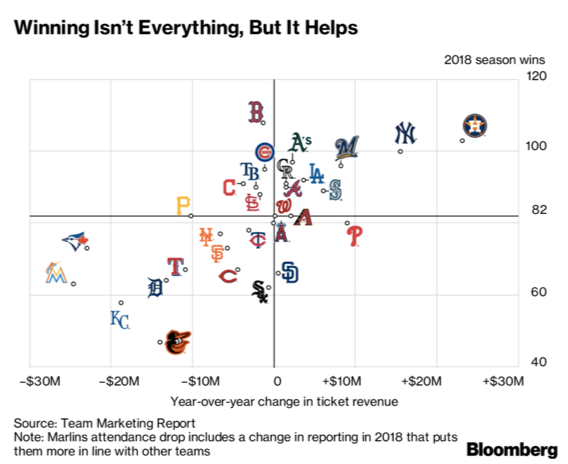 Another thing that makes baseball hard to keep people coming to the games and watching at home is that fans often know early if their team is a contender or not. With so many games, bad teams make it hard for marketers to get people to watch a losing team with half the season remaining. The image above reveals the change in one year of ticket sales which had a lot to do with if teams were winning more games or not. It is a hard problem to face, but not every team can be good but every team wants to make revenue, keep people coming to the games, and keep people watching them at home. As MLB struggles to improve and even maintain attendance and TV ratings, which also decreases the amount of money they make from ticket revenue, there are some solutions that the MLB as a whole could look at to keep people coming and eyes watching at home.

There are two ideas that could help with the attendance and viewership of the MLB. The first idea is the aspect of what days to have night and day games. This is the best idea for getting people in the seats along with getting people to watch the game at home. This plan would include the idea of night games during the week and day games during the week. I hate seeing day games during the week, even though it helps for travel days, because not a lot of markets can attract a lot of people at a random Wednesday game (figure above). The format to a season would consist of a three-game series Monday-Wednesday with all night games then day off Thursday with a three-game series Friday-Sunday with all day games. Of course there would be slight changes like day off Monday instead of Thursday or things like that, but this structure of day and night games could really help the attendance and viewership by playing games where people are not usually busy.

The third one has to do with an online and TV packages that could really hook viewers in. The first idea would be a “steal” of what the NFL does with “Sunday NFL Redzone” (figure above). The idea in this is that this specific channel shows every scoring or big play of all the games going on that time in the NFL, so on Sundays. The MLB could dominate this aspect if they really made it a big product like making it its own channel or individual package. This could be huge because it would be something that people watch everyday since a couple of baseball games are going on everyday. It would include big hits, game wining runs, big strikeouts, fights, etc. The second idea would be a spin off the MLB package where you can watch all the games, but in this package you could pay to watch all of the games of your favorite team. I know I stopped getting the MLB package because I didn’t want to pay so much for all the games when I wanted to just watch the Pirates until September and October came around where my care for baseball would increase because of the playoffs in October and November. These two packages put together would be a lot better than just getting all the MLB games because no one watches every game so why pay for all of them.

It is hard to change baseball because of the tradition behind it, but the idea is coming up with ways to get people to the game and get people who don’t come to still watch it. Now you are not going to increase attendance and viewership every year, but the goal is to maintain and increase without having a drop off period like the MLB had this year. Keeping people coming to the games and watching at home is always the goal for teams in every sport. 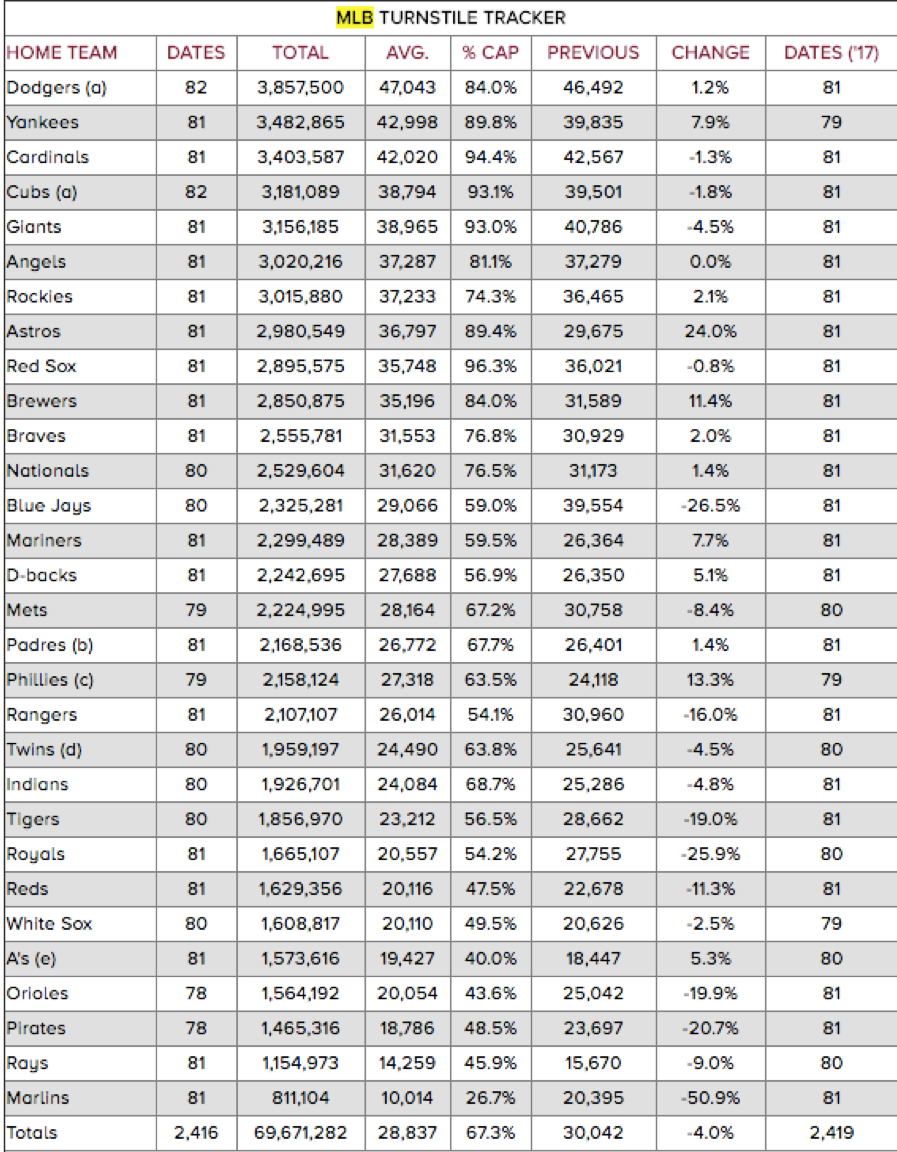 This blog post was written by Samford University student Robert Burke. You can learn more about Robert Burke at https://www.linkedin.com/in/robert-burke-b87390129/