Now is the Time to Capture MLS Crowd

The soccer fandom of the United States typically rises and falls as the World Cup year comes and goes. What happens in the years between? As the MLS has grown in prestige and talent in recent years, they have managed to raise attendance and notoriety across the country. With the recent addition of expansion franchises and an ever-expanding academy system, the MLS is poised to compete with the bigger sports leagues in America for both fandom and attendance levels.

The most important metric we’ll be looking at is attendance data over the past five years. The MLS has seen a substantial rise in popularity over the past few years. More popularity means more eyes on sponsorships, leading to more inventory for sports franchises to sell and more ad space for fans to see. 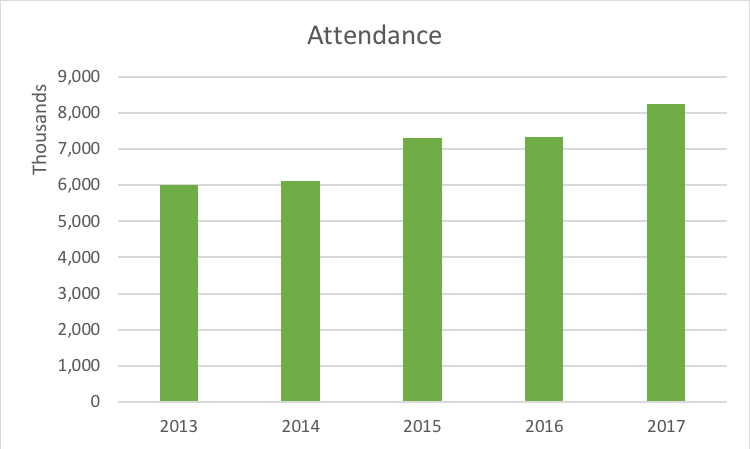 Over the past five years, MLS attendance for regular season games has increased 38% to over 8 million. Despite the decrease in attendance seen across major leagues such as the NFL and the MLB, the MLS hasn’t suffered such issues. Without being plagued with political issues like the NFL, or viewership fatigue as the MLB, the MLS has been free to grow and expand. There was a definite era when the MLS viewership relied upon the star power of aging European football players. The momentum has shifted, however, now prioritizing youth and academy development over aging stars. 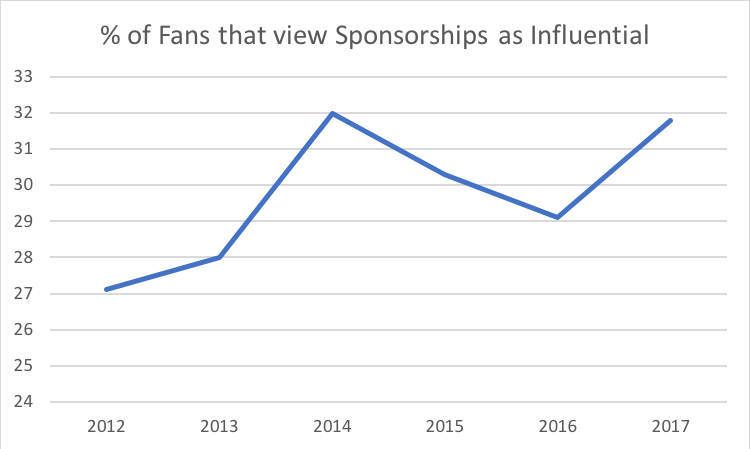 Attendance data alone is not enough to entice sponsors to buy sports franchise inventory. There also has to be evidence that fans view sponsors as influential in their purchase decisions. The MLS experienced a huge spike in the influence of their sponsors in 2014, that has yet to be surpassed since. Granted, fans are not always self-aware of how impactful sponsorship advertisements are on their consumer behaviors. It could even be the case that there exists little correlation between perceived influence and actual influence. However, sponsors gauging perceived influence would likely factor into their decisions on whether or not to sponsor a given sports franchise.

With both attendance and perceived sponsorship influence on the uptrend over the past five years, it seems to be a great opportunity for prospective sponsors to get into the action. With the MLS planning for new expansion franchises in both Cincinnati and Miami, there will be plenty of inventory for sponsors around the entire country. Expansion franchises in most sports are a rarity, but have become somewhat common within the MLS. Some recent expansion teams such as Atlanta United and Orlando City have exploded in popularity, gaining both local and national recognition. Obviously, it will be difficult for sponsors to try to predict expansion teams that will eventually turn into winning franchises. However, sponsors have seen brands such as American Family Insurance be catapulted to high levels of MLS recognition due to their association with winning teams.

Another advantage that could be present in becoming a sponsor of an MLS team comes in its unique viewership exposure. Because the MLS has risen from humble beginnings of little fan support, it remains somewhat of a novelty for most Americans. Therefore, as more Americans begin to see their first MLS games and start supporting their first MLS teams, they will likely be in a more impressionable state than they are when watching the NFL team they’ve watched for decades. It might stand to reason, then, that despite having less exposure in terms of gross numbers, MLS’s unique audience perspective might make it a more valuable opportunity than an opportunity to become a minor sponsor of a MLB or NFL team.

Few MLS players have large sponsorship deals with apparel and footwear companies like the football giants of Europe typically do. Lionel Messi is obviously a more valuable asset for a company than a recent MLS academy graduate. Yet, the MLS is further developing itself as a springboard for talented players to make their way to Europe. Sponsors might also find value in signing unproven, promising MLS players with the hope of seeing them make the jump to a bigger European league.

Any given sponsorship with a sports franchise carries inherent risks. Sponsors cannot always predict how franchises will succeed or with what zeal an expansion franchise will be adopted by the local community. With tools such as attendance trends and analysis on influential sponsorships, it is clear that there is a growing opportunity for sponsorship in the MLS. It remains to be seen both how the MLS grows over the next decade, and what sponsors make the right decisions with the growth-oriented league.