One Rule Changed an Entire League

We have all seen it in our own way. How the smallest of details can have a massive impact. Though an action may seem irrelevant and minute at first glance, the implications for the future can be huge. The NHL brought this ideal to fruition in a movement to crack down on slashing. What started as a simple rule change solely meant to increase health and safety of players had an impact that few saw coming.

Slashing is defined by the NHL as an “act of a player swinging his stick at an opponent, whether contact is made or not” (Video Rulebook: Stick Fouls). This is a common strategy as players often swing their stick at an opponent’s stick or body to interfere with them in the hopes of causing a turnover. In previous seasons, this rule was called relatively loosely. However, due to many injuries resulting from slashing, the 2017 season has been completely different. NHL referees have been informed to strictly enforce slashing in the hopes of eliminating it from the game. However, the exponential growth of these penalties has done more than just make this league a safer place.

As a minor penalty, slashing has never been common. However, there has been a drastic change this season. 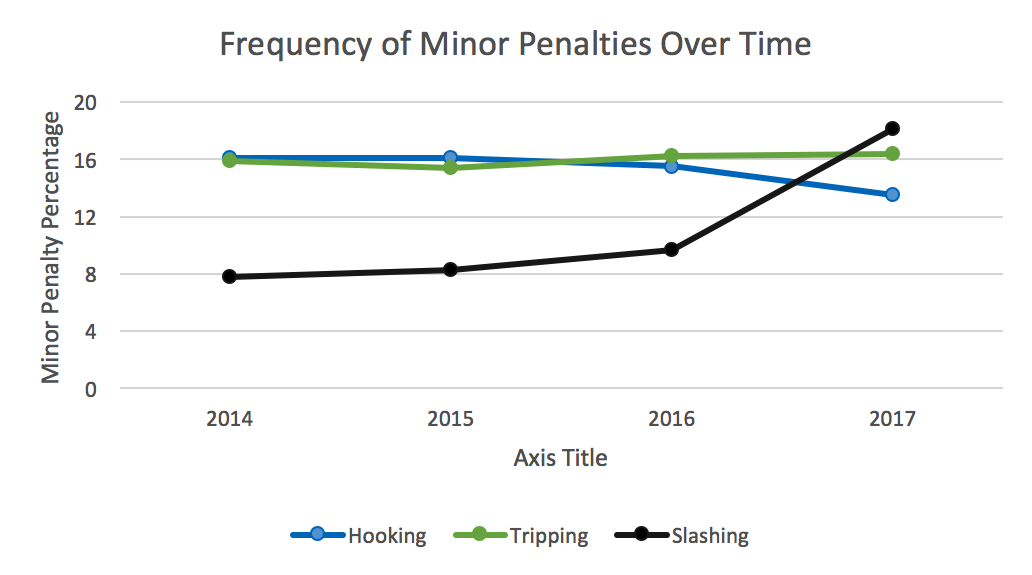 Comparing the two most common penalties (hooking and tripping) with slashing over the past four seasons shows its growth in 2017. In 2014-2016, slashing was called less than 10 percent of the time, way less than hooking or tripping. In fact, in 2016, tripping was called 534 more times than slashing. However, after the rule change, minor penalties are now dominated by slashing. They have jumped from a penalty that is not called often to the most common penalty called in the game (at 18%).

In looking at total slashes called in the past three seasons, it is clear that slashing has always stayed at a constant level. 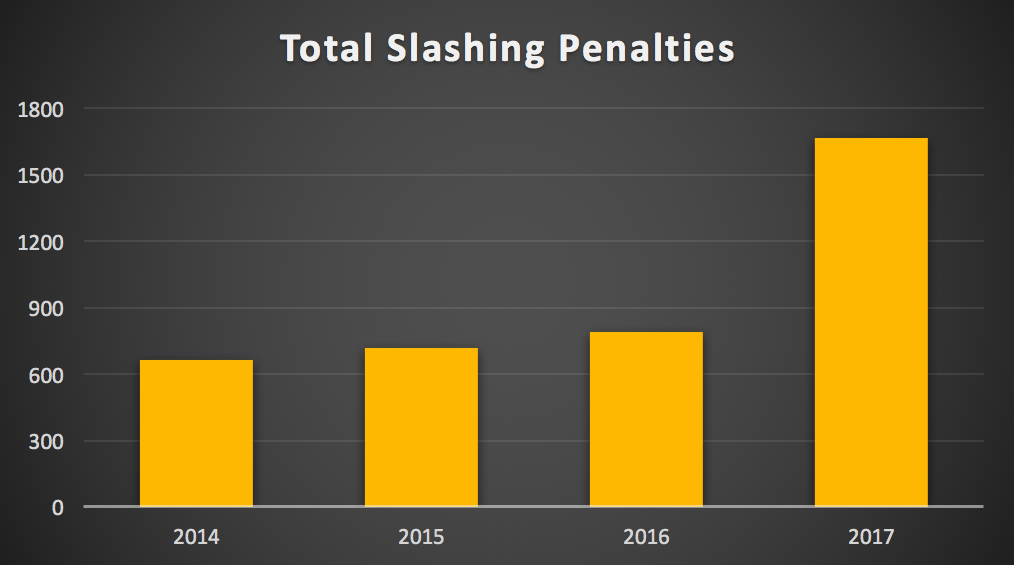 One-third of the way through the 2017 season, though, slashing calls are insanely high. At its current rate, slashing will be called more than 1,600 times. That would be a 111% increase from 2016 and the highest amount recorded in one season. This drastic increase in penalties is changing the way the game is played in the NHL.

Fans are ecstatic about the fast pace and high goal totals so far this season. Teams are averaging over 3 goals per game, the second highest amount in the past 20 seasons. Slashing calls can easily be attributed to this for two reasons.

First, because of the increase in slashing penalties called, teams are on the power play more often than ever. In fact, four teams have been called for slashing so much this season, they have already surpassed the amount of times they were called for it last year.

Teams recognize this statistic and are centering strategies on how they can take advantage of penalty opportunities. As a result, power play percentage, or the percent of time a team scores on a power play, is the highest it has been since 1989 (at almost 20%).

Second, as players are now fearful of receiving a slashing call for a slight use of their stick as defense, there has been less contact. With less defensive contact, offense is a lot easier, allowing a fast pace for players to take advantage of every open shot that they see. Coyotes GM and Data Analytics Expert, John Chayka (@JohnChayka) believes, “‘The game is getting faster and the rules are trending towards players that play with skill and speed’” (Traikos, 2017). The new slashing rule reinforces Chayka’s statement as a fast pace is encouraged with fewer legal methods of interference.

Even though it is only one-third of the way through the season, statistics still prove that the NHL is changing. Fans should be excited about this change, too! With increased goals and scoring opportunities, hockey is becoming a more entertaining sport to watch. The slashing rule may have been aimed at player safety, but, in reality, has changed the dynamic of hockey as a whole.

This post was written by Samford University student Jacob Gholson.