Patrick Mahomes: The Future of the NFL

Published on October 24, 2018 by Patrick Schilling   Share this on:

When the Chiefs traded veteran quarterback Alex Smith to the Redskins after the end of last season it proved one of the boldest of the coming offseason. The Chiefs were giving up a QB who at the time, was in talks to be MVP and had just taken them to the playoffs. In his place, would be the then rookie Patrick Mahomes who played just one game in 2017, throwing for 284 yards and one interception.

Fast forward to Week Seven of 2018 and the Chiefs look like they fleeced the Redskins. Not only did they get rid of an expensive contract, but they potentially gave the reins of the franchise to one of the best quarterbacks we’ve seen in the last decade.

Since 2016, there have been a lot of big name QBs drafted that currently start for NFL teams: Carson Wentz, Deshaun Watson, Jared Goff, etc. Although Patrick Mahomes was not taken inside of the top-5 in his draft, he’s proved to be elite in terms of young quarterbacks, even against two who are talked about to be the future of the league, Wentz and Watson.

Through his first eight games, Mahomes has been nothing short of spectacular. Along with the stats above, he’s averaging 8.77 yards per attempt (9.36 per completion), a 109.4 QB rating and two rushing touchdowns. All the QBs above were drafted since 2016, and it’s not even close stat wise who had the better start to their career.

Currently, the Chiefs’ QB sits atop the league in these categories, three of which being maybe the most categories for a quarterback. He’s outplaying the likes of Aaron Rodgers, Tom Brady and Drew Brees and if you’ve seen him play, he’s doing it with style as well.

He’s on pace for over 40 TDs and almost 5000 yards, and although he may not keep the pace up to reach those numbers, any team in the league would take a 4000 yard and 30 TD performance. Mahomes is very much on his way to be a top candidate for MVP. 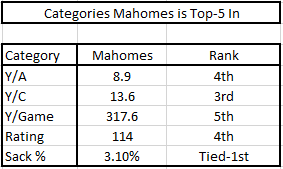 Along with his chart-topping stats, he’s been putting up solid numbers across the board. He keeps the ball out of harms way and while doing so, is efficient with his throws. His yards per game and yards per completion are one of his best qualities and show how easily he can control the offense and move the ball downfield.

Mahomes is the future of the NFL, and his gun-slinging play style is perfect for a new age QB. Pending any injuries, Mahomes is here to stay and in my opinion, will be one of the top quarterbacks in the NFL for years to come.