The Barrage from the Bronx Bombers

Around two thirds of the way through the 2018 season, the New York Yankees are ruling one of the most incredible stats of the year. As of Saturday, August 18th, the Yankees have launched an MLB best 197 homeruns, that’s almost thirty more than the second-place team. While doing so, the Yankees only have one hitter inside of the top-10 in homeruns, Giancarlo Stanton (6th), who has only thirty-three homeruns. They’re only other player in the top-20 for homeruns is Aaron Judge who’s out for at least a month with an injury.

Without the injury to Judge, I would confidently say that the Yankees would end the season breaking the record of the 1997 Seattle Mariners for most homeruns in a season (264) or at worst be top three. Even though the Yankees best long ball hitter is hurt, it’s very possible that they will still top the Mariners and have the most homerun filled season of all time. Is it just this year? Or have the Yankees of this era embraced the “Bronx Bombers” persona and begun a new reign over the league?

It’s no secret that Yankee Stadium has historically been a hitter’s park, especially for pull hitters. In Old Yankee Stadium, it was just 318 feet down the left field line and 314 down the right field line. The short porch in left field has favored hitters for decades and not too much changed with the construction of New Yankee Stadium. 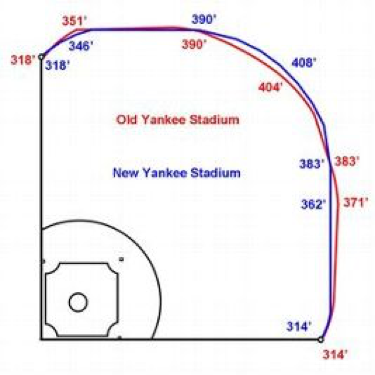 One big thing that did change however was the shortening of the right center fence. By straightening out the right field wall, not only did left handed hitters’ benefit, but righties with good opposite field power were now able to drive it over the fence much easier. Not to take anything away from their 2018 team, because they have incredible hitters, but they have two of the biggest opposite field powers in the league in Aaron Judge and Giancarlo Stanton.

Below is where the Yankees have finished each season in the league in terms of total homeruns since New Yankee Stadium was opened for the 2009 season. 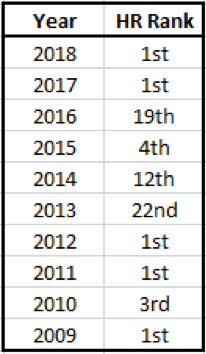 Assuming nothing dramatic happens this year, the Yankees will finish this season number one in homeruns which incredibly, would be their fifth year in the first ten seasons at the New Yankee Stadium that they led the league. To only finish outside the top five three times in ten years is a ridiculous.

One of the biggest reasons the Yankees have been able to total up so many homeruns in the past decade is because of the number of players on the team with the ability to drive the ball deep. 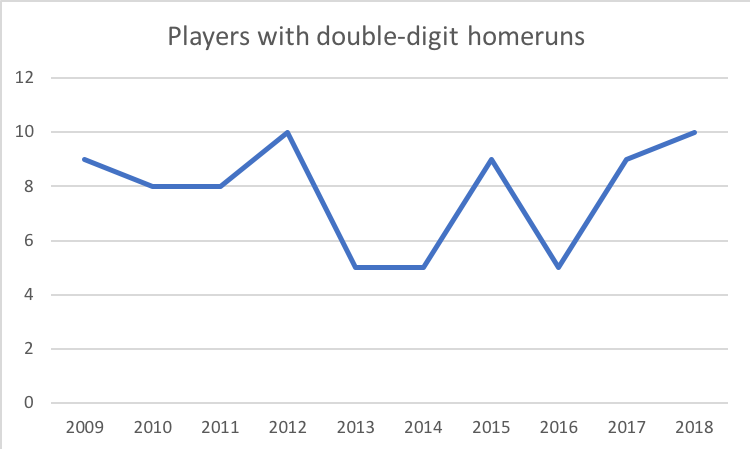 Except for the 2013 and 2014 seasons, the combined number of players that New York has in double digit homeruns is wild. For this season, that number could easily be twelve or thirteen by the time the postseason starts.

Of the eight so far that have reached ten homers, five of them are right handed and one of them is a switch hitter. Not only that, but there is a clear difference between their homeruns at home versus homeruns on the road. 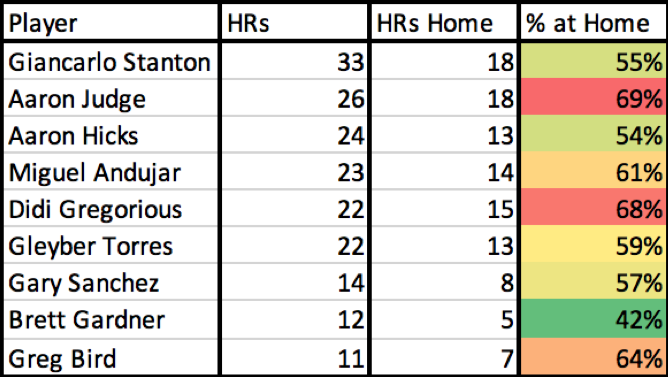 Of the ten players who have reached ten homeruns this year, just one of them has done most of their work on the road. Every other player has hit over 50% of their homeruns at home with two hitters, Aaron Judge and Didi Gregorius, having hit almost 70% of their homeruns in New York.

The Yankees are flat out the best homerun hitting team in Major League Baseball, it is a fact. But, having the homerun advantage at home has benefitted some of their hitters and most certainly has led to the signing and recruitment of other players.

Like many other teams, the Yankees have begun to rely on the longball using advanced metrics like launch angle and exit velocity to perfect their homerun swings. At least in New York, it’s not going to stop anytime soon.