The Future of the Miami Marlins

Published on October 3, 2018 by Patrick Schilling   Share this on:

Two seasons into the Bruce Sherman/Derek Jeter experiment one thing is clear: it’s not looking good.

In 2017 Bruce Sherman, with help from Yankees’ legend Derek Jeter, purchased the Miami Marlins for $1.2-billion. At the start of 2018, the team was only valued at $1-billion with a revenue at $219-million (tied for the least) and an operating expense at negative $53-billion (most in the league).

As for their record in those two years, it’s less than appealing. They’ve finished the 2018 season with a 62-96 record good for last place in the NL East. In 2017 they managed to finish 77-85 which put them in second place in the then miserable NL East.

Of course, it’s unreasonable to blame two people for the struggles of a team that has been in existence since 1993 and never won a pennant, but they’re currently at the helm so let’s get down to the most concerning number for Miami, or any sports team.

One of the worst statistics this year for Miami, is their miserable attendance numbers. Miserable could be generous considering they’re averaging 10,014 fans per game (4,000 lower than the 29th place team) and only achieved 811,104 in total attendance making them the only team to not reach 1.1 million. Miami was one of the few teams not affected by rainouts, one perk of playing in a dome, yet they still were at the bottom of the pack in fans attending. 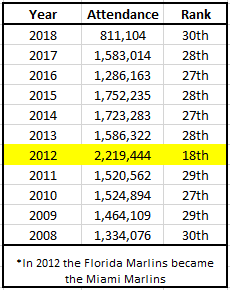 Above, are the total attendance numbers for the Miami/Florida Marlins. In the last decade, they were only able to break out of the bottom-four teams once…once. The only time they did was the year they rebranded as the Miami Marlins and the next year fell straight back down by around 700,000 fans.

The reason I bring up the new ownership, is because in two years, attendance in Miami decreased by almost half. No matter how many fans attended games before then, that is a disastrous number.

The Marlins only accounted for 1.1% of total Major League attendance this year. In 2018, total league attendance was down around three million, around a quarter of it from one team.

It’s more than likely that next season the Marlins will increase their attendance to over one million total fans. But what about the future of the team? Both the Rays and Marlins have experienced trouble in attendance throughout their time as teams, especially in the last decade. 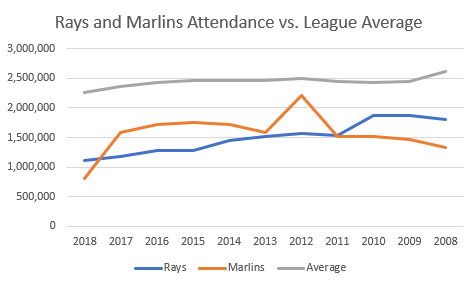 As the graph above shows, neither team has ever gone over the league average in total fans in a season. Even the Marlins rebranding effort couldn’t help the cause. It’s even more peculiar when you think that half of Spring Training takes place in Florida, so the support should, in theory be better.

I think if this continues for the next couple years, Major League Baseball will be forced to step in, especially with a potential expansion and teams moving on the near horizon. It’s very possible one of the teams may not be in Florida ten years from now.