To the West They Go

Mid-Summer, this is when the NBA season truly starts. The Golden State Warriors beating the Cleveland Caviliers in four games and becoming the 2018 NBA Champions is already old news. All the attention has now been shifted toward trades. The end of June and beginning of July is where the money is put on the table, the contracts are signed and the biggest players are traded.

This year most of the the “big” trades have all been players heading towards the Western side of the conference. And one may argue that the biggest and most anticipated news is “The King,” LeBron James, leaving Cleveland and heading to Los Angeles to join the L.A. Lakers. While this was by far the news everyone was waiting for, many of the other Western teams made big trades as well as resigning current players with major contracts.

The Golden State Warriors, Houston Rockets and Oklahoma City Thunder made big moves during the summer trades as well. Golden State signed Demarcus Cousins to the team bringing him to the all star roster the team currently has; while also re-signing Kevin Durant and others to longer contracts with the team. The Houston Rockets were also busy, after losing the Western Conference title just a month back, the Rockets are ready for revenge this upcoming season. For them that meant re-signing Chris Paul, CP3, to a four-year contract. However, for the Rockets there is a lot of unfinished business. The biggest news for the OKC Thunder, was Paul George announcing he would be resigning with the team. Meaning there will be another year of Russell Westbrook and Paul George running the Thunder team. 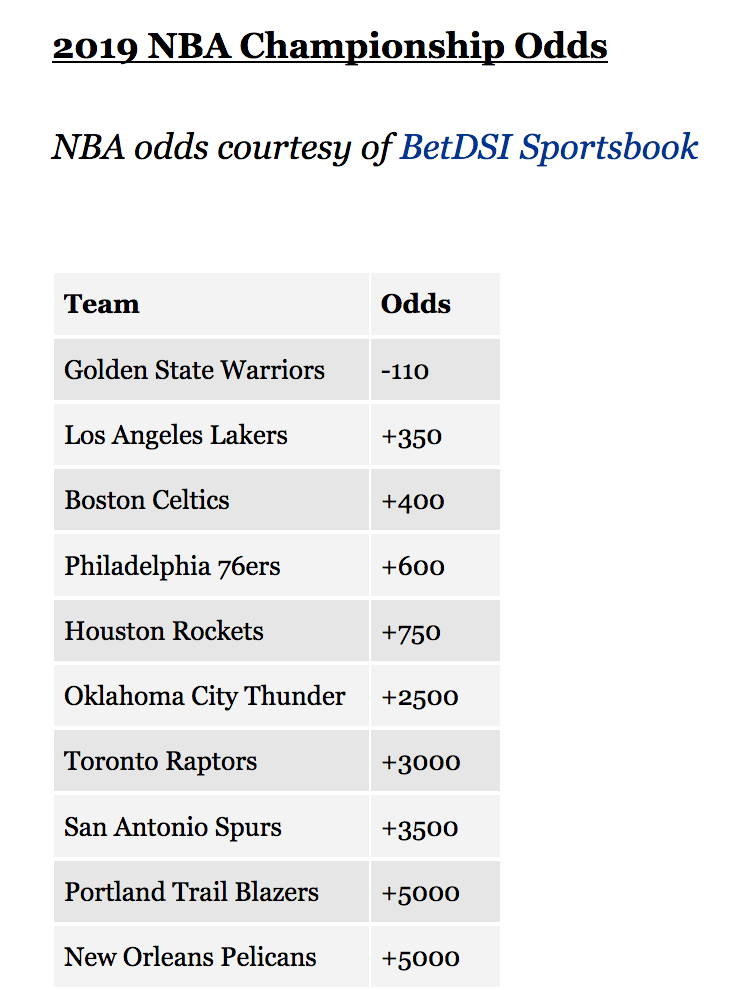 Data from, BetDSI Sportsbook, shows what the odds are for each team winning the 2019 NBA Championship. Out of the top ten teams having the best shot at the title next season, seven of the teams are in the Western Conference. With these odds being stated, it almost feels now that the Western Conference Championship game ever year may be more intense, entertaining and competitive than the actual NBA finals games.

However, with all this talk about the Western Conference this could really be the best time for the Eastern teams to step up out of LeBron’s shadow and show that they are now the best of the East. The Celtics and 76ers are now in the best position they have been in for years to break through to the NBA finals and play one of the many power teams now in the West. I would not get too set on the odds right now, there is still a full season of basketball to be played, and who knows maybe the East now has their best shot to raise up the trophy come next summer.

This blog post was written by Samford University Student Brooke Jenkins. You can learn more about Brooke and her passion for sports at https://www.linkedin.com/in/brookejenkins22/ .