Remember watching baseball games and hearing bizarre statistics, like 76% of teams end up winning when their 6th batter in the line-up gets on base his first try? So do I. Although my findings may not be as nearly arbitrary as this, I have discovered a rather unusual, at worst, statistic that should be brought to light. The number of basketballs sold in each region of the United States directly correlates to the high schools of NBA athletes. 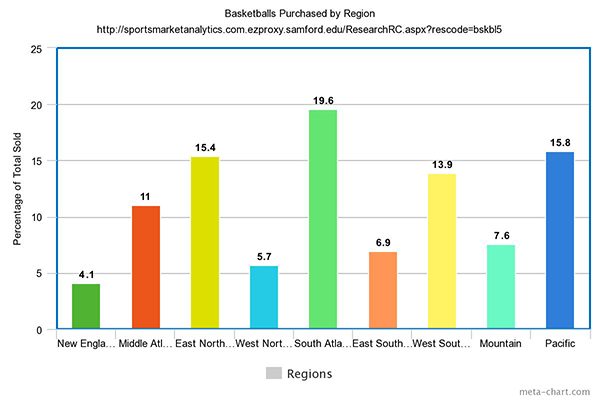 While I was researching my topic for this article, I thought to myself, “Is it as a simple as counting the number of basketballs sold in your area to determine your chances of the NBA?” Obviously, this seems pretty elementary, but then I began to think about how these regions are, most likely, directly related to major basketball cities or schools. So, I started researching and discovered that the data was as clear as can be. These regions reflected, precisely, the exact peaks of each region with the perfectly direct number of NBA players. As cliché as this may sound, the data literally speaks for itself. 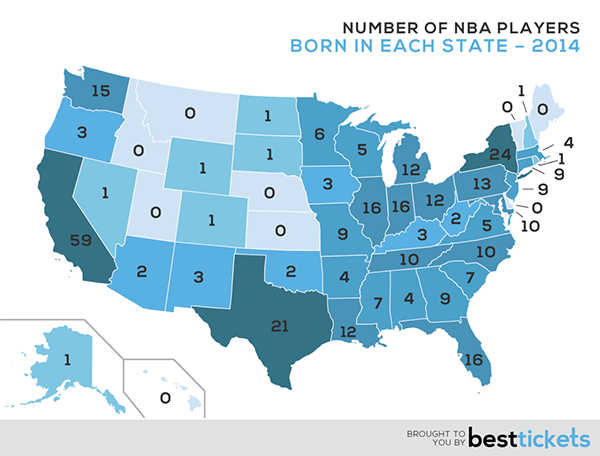 There are 83 NBA players from the South Atlantic region, which is the highest number of NBA athletes out of any region in the United States.  As you can see from my graph, the South Atlantic region has the most purchased basketballs, clocking in at 19.6% of all basketballs sold in the United States. The second highest region that has produced NBA athletes is the Pacific. This is mainly due to the fact that California has created 76% of that regions NBA athletes. They have secured the second highest number of NBA athletes at 68 and came in at 15.8% of all basketballs sold. 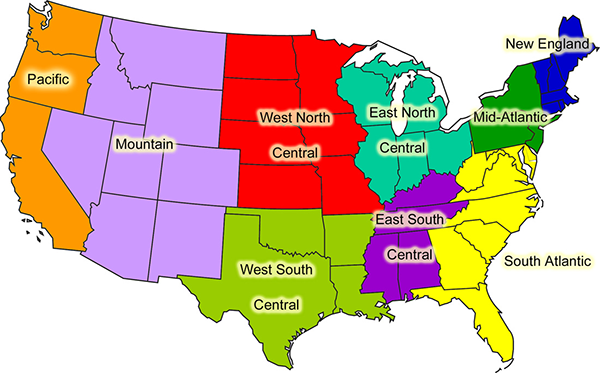 Now, to combat for this perfectly precise data, we need to be a little bit more ambiguous than just strictly looking at the data alone. First off, the second highest region of basketballs sold is in a very populated area that is also home to one of the greatest sports franchises in the nation. California, alone, came in at 52 players total in the NBA. That is very reasonable considering the background of the city and also the large population that is currently residing there.

The East North Central was the next region I thought should be in the ranks of most basketballs sold, primarily due to the fact that they contained Indiana and the city of Chicago, a city and state with rich basketball history. Oddly enough, they were .4 percentage points behind California and the Pacific region.

One possible shock to this list is the South Atlantic region. Of course, this region contains possibly the biggest basketball state in the nation, in North Carolina, but most people, I believe, would consider the latter for taking home the largest number of NBA players. If it weren’t for Florida making its way into the mix, those people would probably be correct. On the contrary, the South Atlantic region would be the ideal region for the chance at stardom and joining the NBA. With the collection of Maryland, South Carolina, and Georgia, it quickly became obvious these states were among the greatest region in America for possible NBA athletes.

Is it truly as simple as the data has made it seem? Is the number of basketballs sold in a specific region directly correlated to the chances of a player becoming an NBA athlete? It does appear to be that way. The tireless effort that these athletes have given to the sport of basketball is nothing less than miraculous. Considering the weekends, the early mornings, and the exhaustion of becoming a professional athlete, it is amazing to see these men and women not get burnout on the sport. As simple as I may have made it seem, it is predominantly due to the fact that these players were born with extraordinary talent and have acted on it in a considerable amount.  I do not want to take away from the fact these athletes have given their life to achieve their goals and I hope this article goes as a word of encouragement to those reading and a motivation to those not in those regions. If your dream is to make it to the NBA, don’t give up and don’t get discouraged. Remember the words from the great legend Michael Jordan, “I’ve missed more than 9000 shots in my career. I’ve lost almost 300 games. 26 times, I’ve been trusted to take the game winning shot and missed. I’ve failed over and over and over again in my life. And that is why I succeed.”