Why doesn’t European football see many underdog stories? Typically, the same clubs succeed and continue succeeding without too much competition- but why? The short answer to explain these upper echelon clubs’ successes is money, but that response does not cover everything. The trends and performances of the top leagues and their teams tells a far more detailed story. 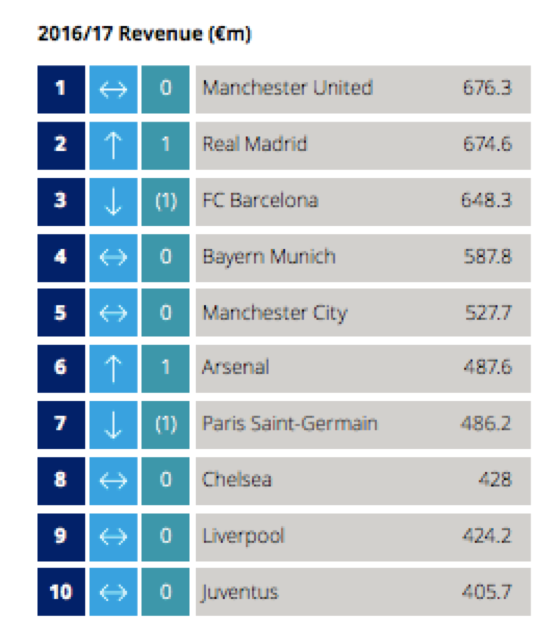 Every year, Deloitte produces a review of general football finances, focusing primarily on the European ‘big five’ leagues (England, Spain, France, Italy, and Germany), as well as the Football Money League, profiling the top twenty highest grossing clubs in the world. This information provides a comprehensive look into the financial side of European football, allowing readers to see the trends that influence the game off the pitch. These resources also depict which segments of the business side of football are the most important to building a powerhouse club. Clearly the organizations at the top of Deloitte’s Football Money League have utilized this data well and built strong and sustainable clubs on and off the pitch.

Kings of the Hill

The first interesting point seen when looking at the Football Money League reports for the last four available seasons is that the top ten teams did not change. In fact, going back to the fifth season, there is only one change in the top ten; AC Milan placed tenth in 2012/13 before being replaced by Liverpool in 2013/14. Clearly the top earning clubs continue to be the top earners year after year, but what propels their consistent growth? Some of the growth must simply be related to the fact that they are top earners, allowing them to bring in the best players and build better squads.

When looking at the 60 major trophies up for grabs in the ‘big five’ and UEFA competition over the last five seasons (league titles, domestic cups, Champions League, and Europa League), teams in the Money League top ten nabbed 46 trophies, an impressive 77% of the total possible haul. However, the makeup of the top ten suggests that performance is not the only driver of revenue.

Another striking feature of the Money League’s top ten is that half of the clubs are English. When looking at the performances of the entire top ten, the English clubs do not necessarily match up to their counterparts on the continent. Of the ten European trophies competed for over the last five seasons (Champions League and Europa League), English teams only brought home two. Those two trophies, both of which in the second tier Europa League are significantly disproportionate to the number of English clubs in the Money League top ten. However, as graphed by Deloitte’s Annual Review of Football Finance 2018, the Premier League has far and away the highest revenue of the ‘big five.’ 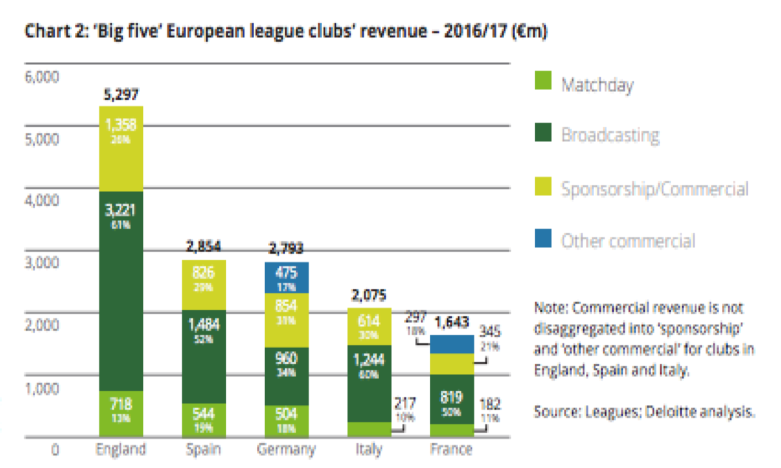 These charts imply that the great equalizer between performance and revenue comes from the marketing department. While the Premier League does bring in the most matchday revenue, the more significant difference between the leagues’ incomes is due to broadcast rights, sponsorships, and commercial revenue.

The Premier League garners such lucrative television deals because it is seen as the most competitive league in the world, as well as hosting many of the biggest brands in world football. Even though the Premier League title does not always seem up for grabs, in reality there have been four winners over the past five seasons. La Liga is the next most competitive with three different champions over the same span, but only because Atletico Madrid broke the Real Madrid/Barcelona duopoly in 2013/14. In France, Paris Saint-Germain have won four of the last five titles, only losing the 2016/17 title to Monaco in stunning fashion. Italy and Germany are equally monopolized by Juventus and Bayern Munich, each having swept all five league titles and winning three of the available five domestic cups. This measure of parity suggests that the presence of only one team for each of the ‘big five’ leagues on the European continent is logical; no one else in those leagues has enjoyed lasting success to bring in the revenue or build a brand on par with the perennial champions. 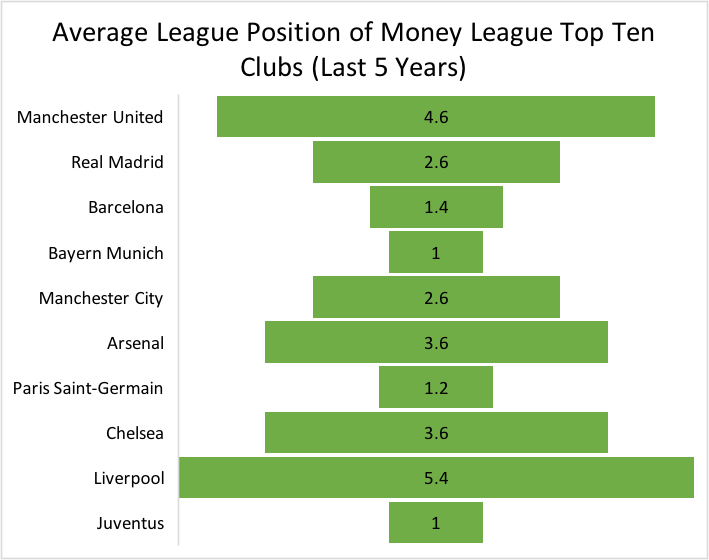 A table of average league position for the Money League’s top ten shows that there is more fluctuation in position in England compared to the other major leagues. Further, this lack of competition dissuades potential networks from paying extravagant fees for broadcast rights. Without the extended viewership in overseas markets, teams that are not as well-known as those in the Money League top ten struggle to reach new fans and build a global brand, in turn negatively affecting their ability to find sponsors and bring in commercial revenue.

The simple takeaway from these reports is that money increases the ability for performance, and strong performance opens new, larger revenue streams that reinforce the cycle. Success breeds success: just ask any of the teams in the Football Money League top ten. By prudently reinvesting funds, clubs are able to both bolster their play on the pitch and increase the presence of their brand globally. Teams that begin to succeed will generate more revenue, which could move them into the lower rungs of the Football Money League. However, these clubs must continue to increase performance on the field if they hope to contend with the superclubs that have owned the top Money League spots consistently for the last five years.

This blog post was written by Samford University student Lauren Brock. You can learn more about Lauren Brock at https://www.linkedin.com/in/lauren-brock/.