Wins and Losses Not a True Indicator of College Football Success

Published on September 8, 2018 by Preston Disney   Share this on:

Football season has started, the gridiron gangs are back and the school year is once again upon us. As an active business major at Samford University, I began to think about the business of football and how great of a financial impact it can have on a school. I began to think; how can a terrible team make just as much money as a really good team?

First, I looked at attendance, because that would give me a good idea of how impactful it would be to the school. The data that I have gathered from the Sports Marketing Analytics website, turned out to be very interesting. For instance, my hometown team, the University of Tennessee competed much better in these statistics than they have on the field over the past ten years or so. Many people would have never guessed this. As we have learned in my Sports Marketing class, winning does not necessarily guarantee fan attendance. I would love to say the winner of every World Series came back the next year with better attendance, but that is not the case. Now, back to the data, I chose to look at the correlation between attendance for college football games and total revenue earned for ten specific teams. 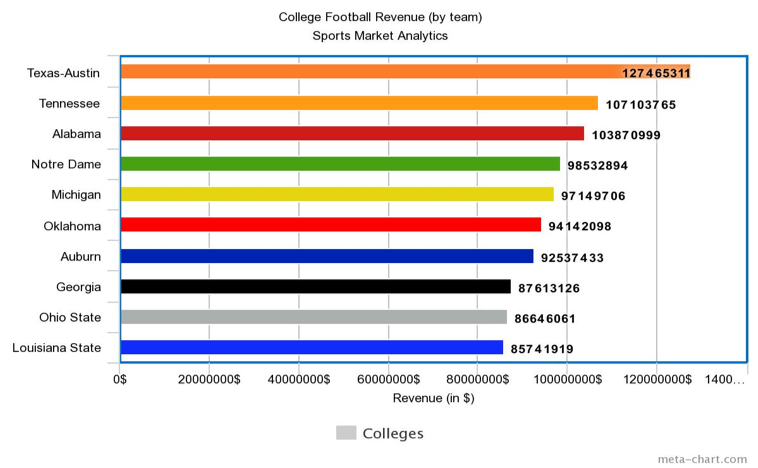 Graph 1 above shows the highest revenue earned out of every college team in the nation was the University of Texas at Austin. The Longhorns went 7-6 last year, which was good enough for 7th place in the Big 12. The data I collected is from 2016, but still in that year they did even worse at 5-7.

As most people may see, this list is not going to parallel with the past championship contenders, or possibly even the next ten years of championship contenders. The next spot was set aside for the real orange team, the Tennessee Volunteers. As a homegrown Tennessee guy, I saw this as my only chance to brag about the devastating Vols, who went 4-8 last year, but this also goes to show, a team could fall under expectations for many years in a row and maintain its high revenue growth.

Third place was given to the arguably the best dynasty in college football right now, the Alabama Crimson Tide. If you guess Alabama on the first two, you finally got it right on the third. It’s pretty understandable why they have reached this level of revenue because they have been dominating over the past years and have known to dominate in the past. As far as the rest of list, I have placed the graph for highest revenue, in order to cure your curiosity.

The second aspect I took into consideration for this data analysis was college football fan attendance, based on specific college football teams. If you are a veteran in the college football world, these attendance numbers should be pretty easy to guess. It could seem a little unfair to compare these teams based on their attendance because the players don’t choose how many seats are in the stands. However, this analysis is not about fair game, it is about real numbers. Graph 2 below shows the top spot for highest attendance in the 2016 college football year was Michigan, led by Jim Harbaugh. As underwhelming as Michigan’s team has been, or ended up, their stadium holds 107,601, the most out of any college football team, so they are more than likely to hold this record for quite a while. 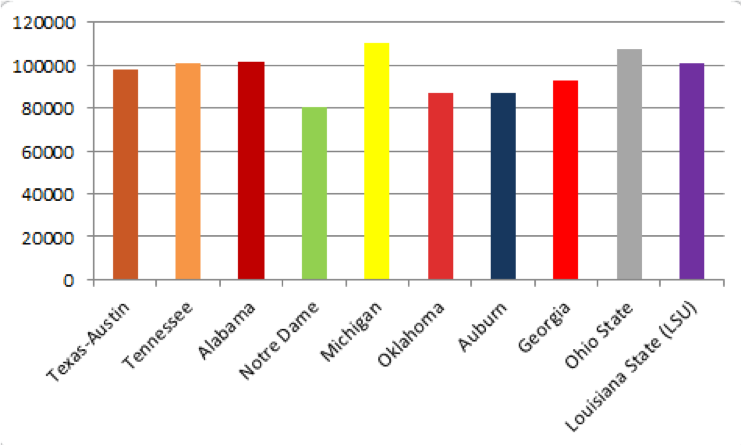 Second, comes the Ohio State Buckeyes. The Buckeyes stadium holds 104,944. As tough as it is to say, the Buckeyes are going to maintain this attendance whether or not Urban Meyer is coaching or not. It is just the way football is, the better the tradition, the higher the attendance and revenue. Third place is taken by the Alabama Crimson Tide, because of obvious reasons. Although their stadium does not hold quite as much as the next few schools, like Tennessee or Texas, they have been stellar in their performances over the past years thanks to Nick Saban. The farther we go down the list, the more the wins and losses of the team affect the attendance.

Overall, these data points have faired pretty well with how traditional college football is and how a losing record does not necessarily mean your team is not winning off the field. From Michigan having the highest attendance, and Texas finding its way in the top spot for earning, there does not seem to be much of correlation for wins and losses and these statistics. The traditions these teams have had and also the atmosphere of the city or state are truly the only factors that will prove how well these teams will do in the categories I have chosen.

Football is right around the corner, either way, everyone will cheer on their team, good or bad, and have a good time doing it. That’s what sports is all about, enjoying the entertainment and forgetting everything else for a few hours a weekend. As I cheer on my dismal Tennessee Volunteers, I hope to see you all cheering on your respective teams. Good luck to your team and good luck to you in these crazy times of the year that we call football season.