Are Teams Living or Dying by the Three in Today’s NBA?

The sport of basketball is continually evolving and forcing players to change with it. Over the past decade, the popularity and usage of the three point shot in basketball have skyrocketed. Consequently, players’ attempts to launch these long balls from absurd distances have become much more frequent and expected. The incredible shooters of today’s game, such as Steph Curry and Damian Lillard, are shooting more threes, and from longer distances, than ever seen before. This trend in the sport has led fans and players alike to believe that such deep sharpshooters are necessary to make a team successful. But do the statistics provide any evidence of a correlation between winning and three point shooting?

A Trend in the Game

Before we analyze the relationship between team success and three point shooting, it is important that we have some context as to why this is significant in today’s game. The following charts show the steady increase in three point shooting in the NBA over the past 10 seasons. 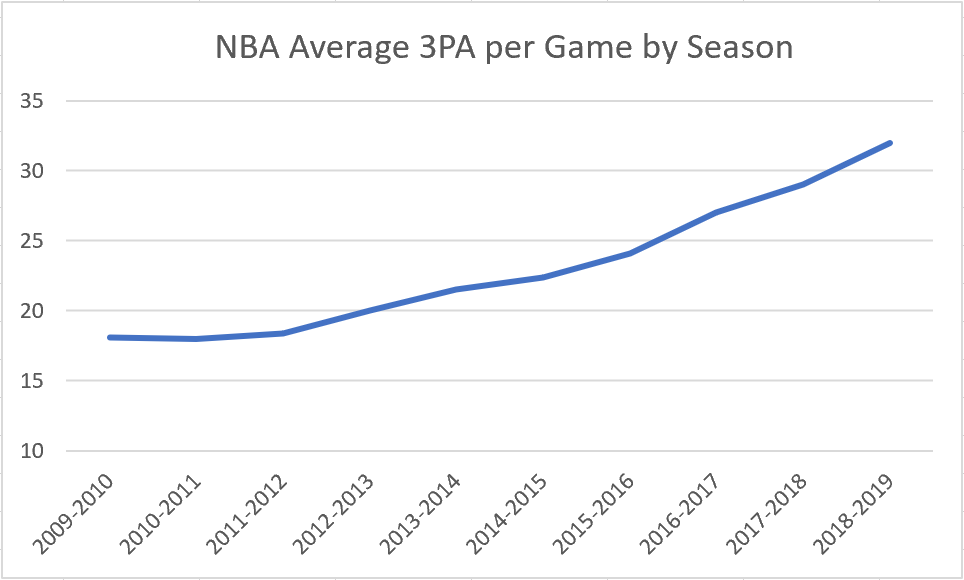 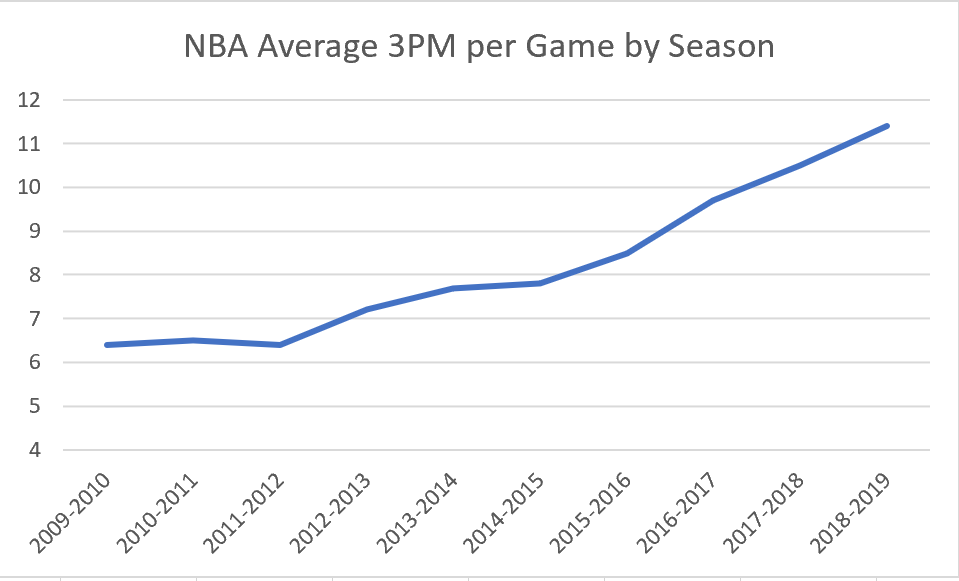 Does it Lead to Success?

As we have already seen, the three point shot is more prevalent in the NBA today than ever before. But why is this? Is there a clear relationship between shooting the long ball and winning? Let’s see what the statistics show us. 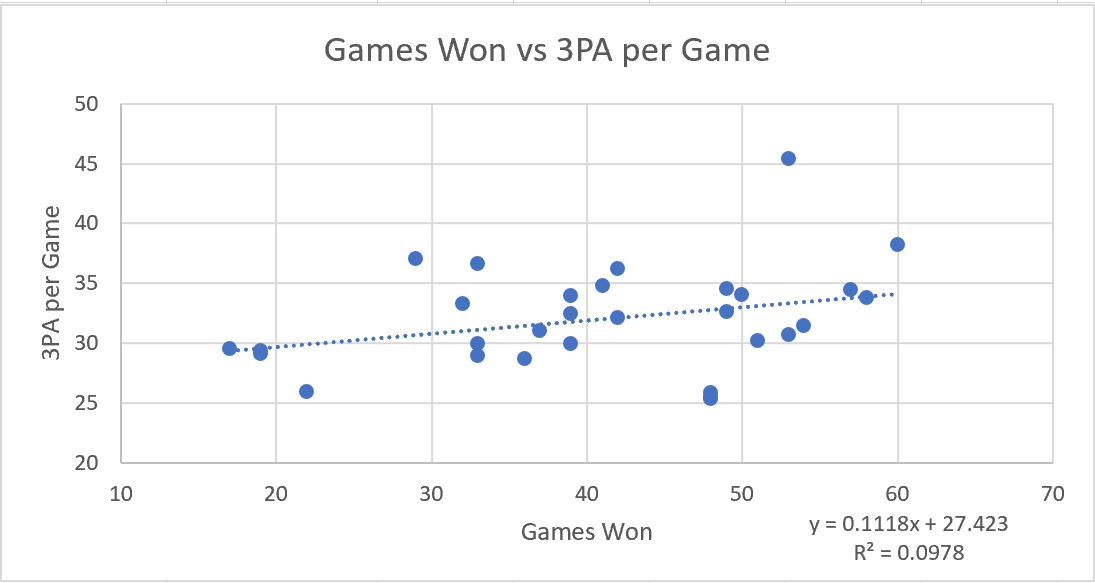 The graph above has a correlation coefficient of r = .313, which is a weak positive correlation. This tells us that there may be some evidence to support attempting more threes leads to winning more games, but the evidence is not strong. However, through linear regression, we find that on average attempting one more three per game leads to about .875 more wins per season. 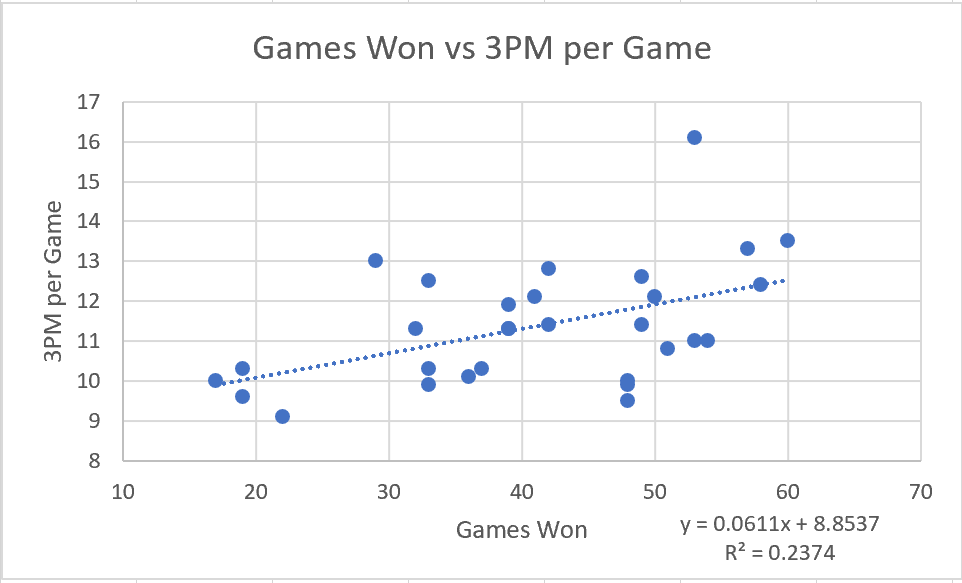 This graph has a correlation coefficient of r = .487, another weak positive correlation. We have a little stronger evidence here that making more threes per game leads to winning more games, but the evidence is still not convincing. Through linear regression, however, we find that on average making one more three per game leads to about 3.883 more wins per season. 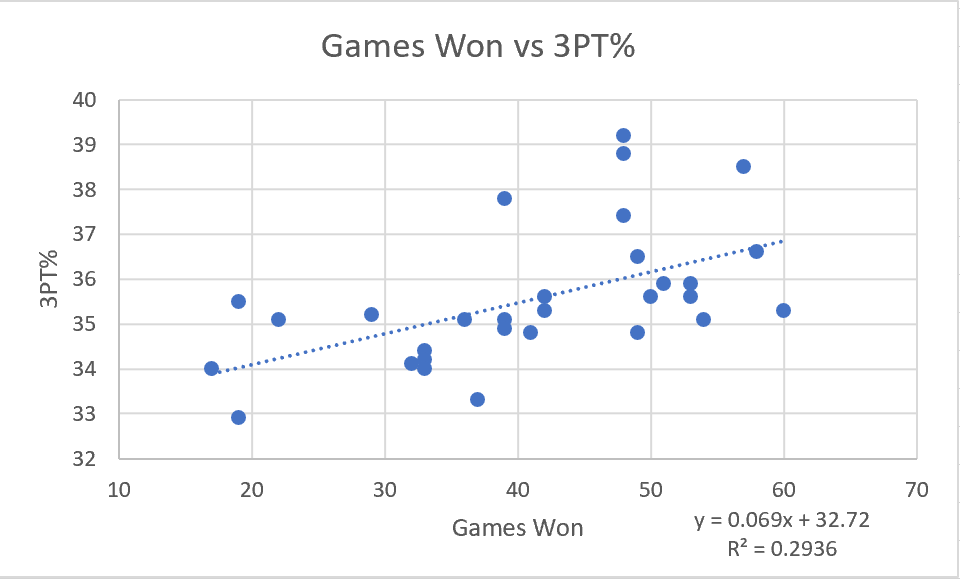 This graph gives us our strongest correlation coefficient yet of r = .542, a moderate positive correlation. This evidence proves that having a higher three point percentage directly leads to winning more games. By raising your team’s three point shooting percentage average by one percent, you can expect to win 4.254 more games in a season.

But What About Ultimate Success?

From the explored relationships above, teams may not be entirely convinced that three point shooting is a necessity for success. We only found weak to moderate correlations that link three point shooting to winning. Is a weak to moderate statistical correlation enough to make players and coaches focus more on the long ball? Probably not. However, observing the statistics of the last five NBA Finals champions may give us exactly the proof we’re looking for.

As the three point shot has continually grown in popularity and frequency in today’s game, many have been left to contemplate the direct effects it has on team success. Statistically, we have evidence to prove that attempting more threes, making more threes, and, most importantly, converting them at a higher rate does lead to more wins, and even championships. Teams in the NBA are now living, and winning, by the three more than ever!