Alabama’s legendary coach Paul “Bear” Bryant was talking about football when he coined the phrase “defense wins championships,” but his words are applicable to many other sports as well. Basketball coaches, in particular, have always stressed the importance of having a solid defense because they recognize that it can lead to more scoring opportunities and, consequently, greater chances of victory. But professional basketball players and coaches have become less defensive-minded in recent decades, and NBA champions are now known for their offensive talent rather than their defensive prowess. That being said, is the idea that defense wins NBA championships outdated?

Notice that 18 out of the last 20 NBA champions had an opponent PPG statistic that was less than the league’s average opponent PPG statistic, meaning that the champions allowed fewer points to be scored against them in a regular season game than the “typical” NBA team. Additionally, the tables below reveal that in the last 20 years, 45% of championship teams were ranked in the top 5 for opponent PPG and 70% were ranked in the top 10 (the lower the opponent PPG, the higher the rank). This goes to show that NBA champions are better at limiting their opponents’ point totals than most teams in the league. 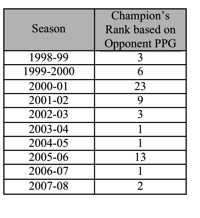 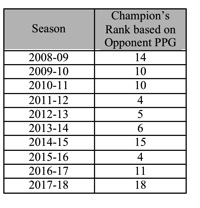 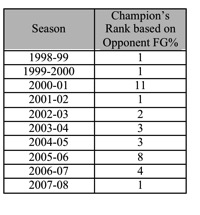 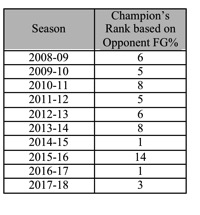 Players who face a lot of defensive pressure cannot execute their offensive schemes easily and are more likely to make mistakes and turn the ball over. Therefore, it is logical to assume that teams with strong defenses have more opponent turnovers, more possessions/opportunities to score, and greater odds of victory. 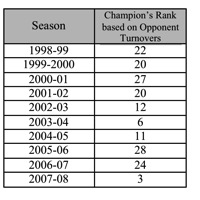 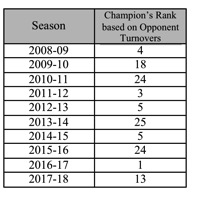 Rebounding is a critical part of defense because it helps minimize the number of opportunities that a competitor has to score. For each of the last 20 seasons, the chart below reveals the champion’s and the league’s average defensive rebound percentage (DRB%), which is the percentage of available defensive rebounds that a team’s defense actually secured. 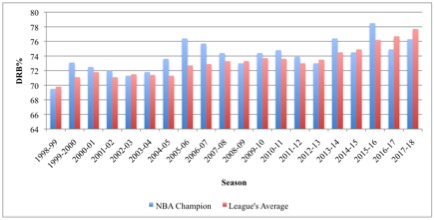 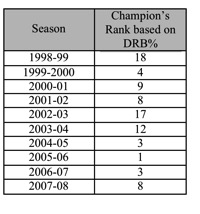 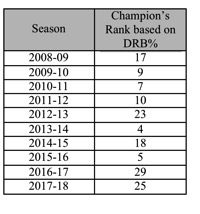 The quality of a team’s defense heavily influences its ability to win games and championships, but certain aspects of defense are more important than others. In particular, teams hoping to win the NBA title should focus more on minimizing their opponents’ point totals and field goal percentages and less on forcing turnovers and securing defensive rebounds. Thus, a more accurate version of Bear Bryant’s quote might be “Parts of defense win championships,” at least in the context of professional basketball.