How Have Recent #1 Overall Draft Pick Quarterbacks Performed in the NFL?

In the NFL Draft it is becoming almost a certainty that the team with the first overall selection will take a quarterback with their number one pick.  Over the last 20 drafts, the first overall pick has been used on a quarterback 14 times, included this year’s when the Arizona Cardinals selected Heisman trophy winner Kyler Murray out of Oklahoma.  There is no question as to why these franchises use this most highly valued pick on a quarterback.  With the evolution of the NFL becoming a pass-heavy league, it seems vital to have an explosive aerial attack, all starting with your team’s leader behind center.

However, with so many teams selecting quarterbacks with the first pick in the draft, it raises questions as to the success of taking this route.  This article will statistically break down the last ten quarterbacks to be selected first overall in the NFL Draft and hope to answer some questions.  How successful have these top-pick quarterbacks been in the league?  Should teams keep using their number one picks on QBs?  And what should we realistically expect from Kyler Murray’s season and career as an Arizona Cardinal?

As we can see above, the statistics are fairly similar amongst these players, with the exception of JaMarcus Russell; however, none of these players truly stand out with overwhelmingly impressive stats.  None of these QBs average two or more touchdowns a game, the group being led by Andrew Luck at 1.99.  However, it does seem like these QBs are consistent at taking care of the ball, with seven of the ten throwing less than one interception a contest.  If we add up each player’s average game stats and divide by the ten players, we can come up with a total average game for the typical first selected QB.  It would provide us with the following stat line: 1.49 touchdowns, 0.86 interceptions, and 237.19 passing yards, with a completion percentage of 60.77% and a QB rating of 86.16.

To further compare these quarterbacks and how they perform in the league, I made the following table for their season averages.  To do so, I just took each player’s game averages and multiplied them by 16.  This will provide us with stat lines as to if each QB played their average game for an entire season.

As we can see, seven of these ten QBs would throw for over 20 touchdowns in their average season, with Baker Mayfield and Andrew Luck both eclipsing 30.  However, we can also see that all of these QBs would throw for double-digit interceptions in their average season, except for Alex Smith at 9.76.  Once again, I took these season averages amongst these QBs and divided by ten to get a typical season stat line.  The average season for these players is as follows: 23.82 touchdowns, 13.73 interceptions, and 3,795.06 passing yards.  The average completion percentage and QB rating do not change, staying at 60.77% and 86.16, respectively.

Through observing these statistics, I do not see any glaring evidence as to why or why not a franchise should take a quarterback first overall.  The statistics for the average number one pick do not provide evidence that selecting a QB first will guarantee success or failure for the given player; however, does picking a QB first have any correlation with team success?  After all, the franchise winning games is what it’s all about, right?  The following table shows these ten quarterbacks’ winning percentages in their NFL careers. 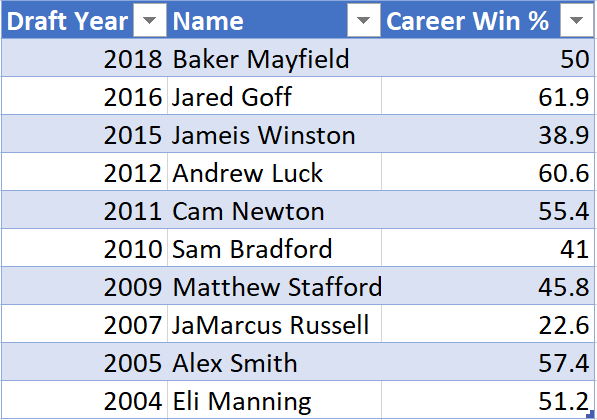 As seen above, we do not have strong evidence to conclude that drafting a QB leads to great team success.  Only five of the ten have winning records as starters in the league, with only Jared Goff and Andrew Luck winning more than 60% of their games.  Additionally, only one of these quarterbacks have reached the ultimate goal of winning a Super Bowl, Eli Manning doing so twice.  The average winning percentage among these QBs is a mere 48.48%.

What to Expect for Kyler Murray

To Pick or Not to Pick

From observing statistical data, I do not believe that there is a clear answer as to whether number one selected QBs excel or underperform in the NFL.  However, we can see that drafting a QB first overall does not typically lead to team success, in terms of winning.  Therefore, I would suggest that these franchises start using their top picks to select other players more likely to help their team win games, than trying to find the next superstar quarterback.