How Important Are Home Runs in a Power Hitting Period?

In previous eras of professional baseball, many more singles, doubles, and triples were hit, and only a handful of talented, powerful players earned reputations as home run hitters. Nowadays, however, home runs are a common occurrence, and individual, team, and league home run records are constantly being broken. The chart below shows that the MLB’s average number of home runs hit has increased from 140 in the 2014 season to 186 in the 2018 season, and it even reached 204 in the 2017 season. People might assume that teams in the American League, which are permitted to have designated hitters, are solely responsible for the rising frequency of home runs, but the chart reveals that teams in both the American and National Leagues are hitting more home runs each season. 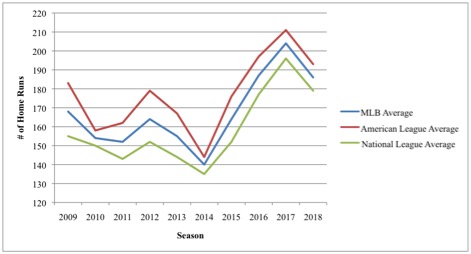 When asked about the recent home run spike, MLB Commissioner Rob Manfred explained, “We’re in a period where we have bigger, stronger, faster athletes. I don’t think it’s surprising that given that development, there’s an emphasis on…power hitting, which gives you a lot of home runs” (USA Today). This raises the question: are home runs now impacting the outcomes of games more heavily? In other words, is there a strong correlation between a team’s number of home runs and number of wins? 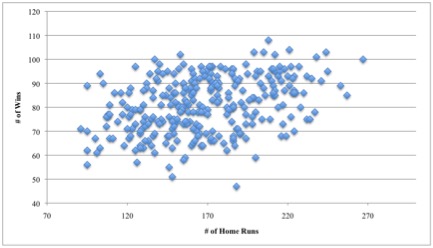 The scatterplot above, which was constructed using data from the last ten seasons, shows the relationship between each MLB team’s number of home runs and number of wins. Using linear regression, I was able to determine that the data sets’ correlation coefficient, which measures the strength of the relationship between the two variables, is r0.37. This means that there is a weak, positive correlation between the number of home runs hit and the number of games won. Thus, we can say that hitting more home runs does not necessarily improve a team’s chances of victory. An analysis of previous World Series champions’ home run totals further proves this point. 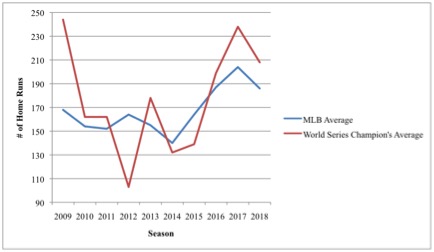 We can conclude that, although Major League Baseball has entered a phase of power hitting in recent years, the ability to hit home runs frequently is not essential to win games and championships. Therefore, players and coaches should not place too much value on their home run totals, and general managers should not devote excessive resources to stacking their teams with sluggers.