Is the MLB Juicing Baseballs This Season?

“Major League Baseball’s turning this game into a joke. They own Rawlings, and you’ve got Manfred up here saying it might be the way they center the pill. They own the [explicit] company. If any other $40 billion company bought out a $400 million company and the product changed dramatically, it’s not a guess as to what happened. We all know what happened. Manfred the first time he came in, what’d he say? He said we want more offense. All of a sudden he comes in, the balls are juiced? It’s not coincidence. We’re not idiots.”  This is a quote from Houston Astros pitcher Justin Verlander expressing his concerns about the potential juicing of baseballs used in the major leagues.

The conspiracy of baseball juicing has been around for many years.  Essentially, it is the belief that the MLB is deliberately altering their baseballs in order to produce more scoring and excitement in their games.  Many players and fans alike have begun to ask questions as to if this juicing is currently occurring in the league.  Is there substantial statistical evidence to support these claims?  Below I will observe trends in relevant offensive categories from previous years to see if anything hints towards the juicing of baseballs this season. 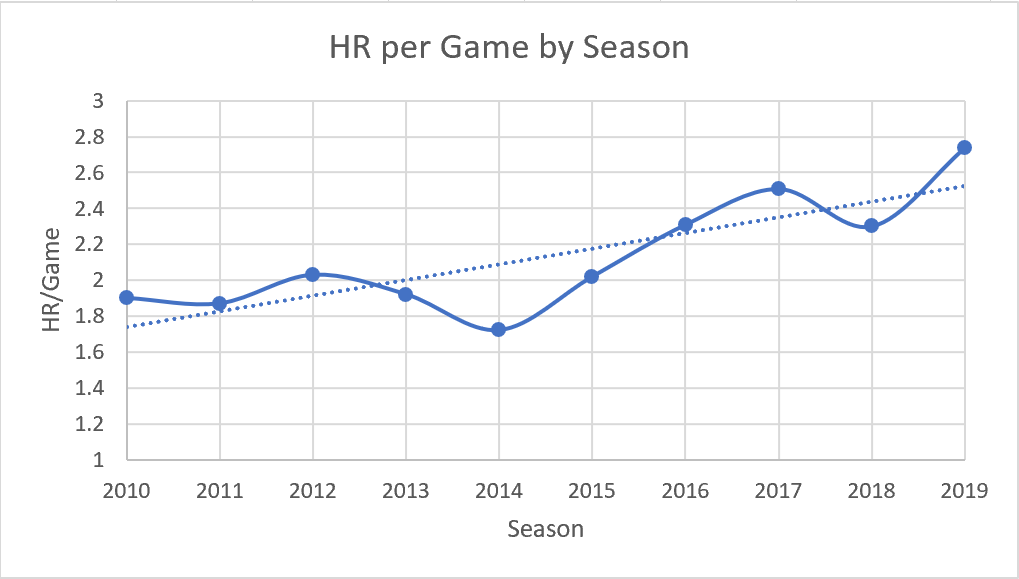 As we can see from the graph above, there seems to be a positive trend in the amount of home runs hit per game throughout the past decade.  For context, the average major league game in 2019 (2.74) has more than one whole home run more than the average game in 2014 (1.72), just six seasons ago.  The average major league game this season has 2.74 home runs, which is the highest mark of any season this decade.

To further show the exciting offense on display this season, I broke down the average amount of runs scored per game over the past decade.  As we can see from the graph above, the average number of runs scored per game seems to be trending positively over time.  To relate, there is, on average, 1.47 more runs scored in an MLB game in 2019 than there was in 2014.  The average major league game this season produces 9.6 runs, which is the highest in the last ten years.

While we can see that offensive statistics have been trending positively for the past decade, this many suspicions about juicing have not occurred until now.  The following graphs compare the statistics of all 30 MLB teams from 2018 to 2019 to see the major change in offense from last season to this one. 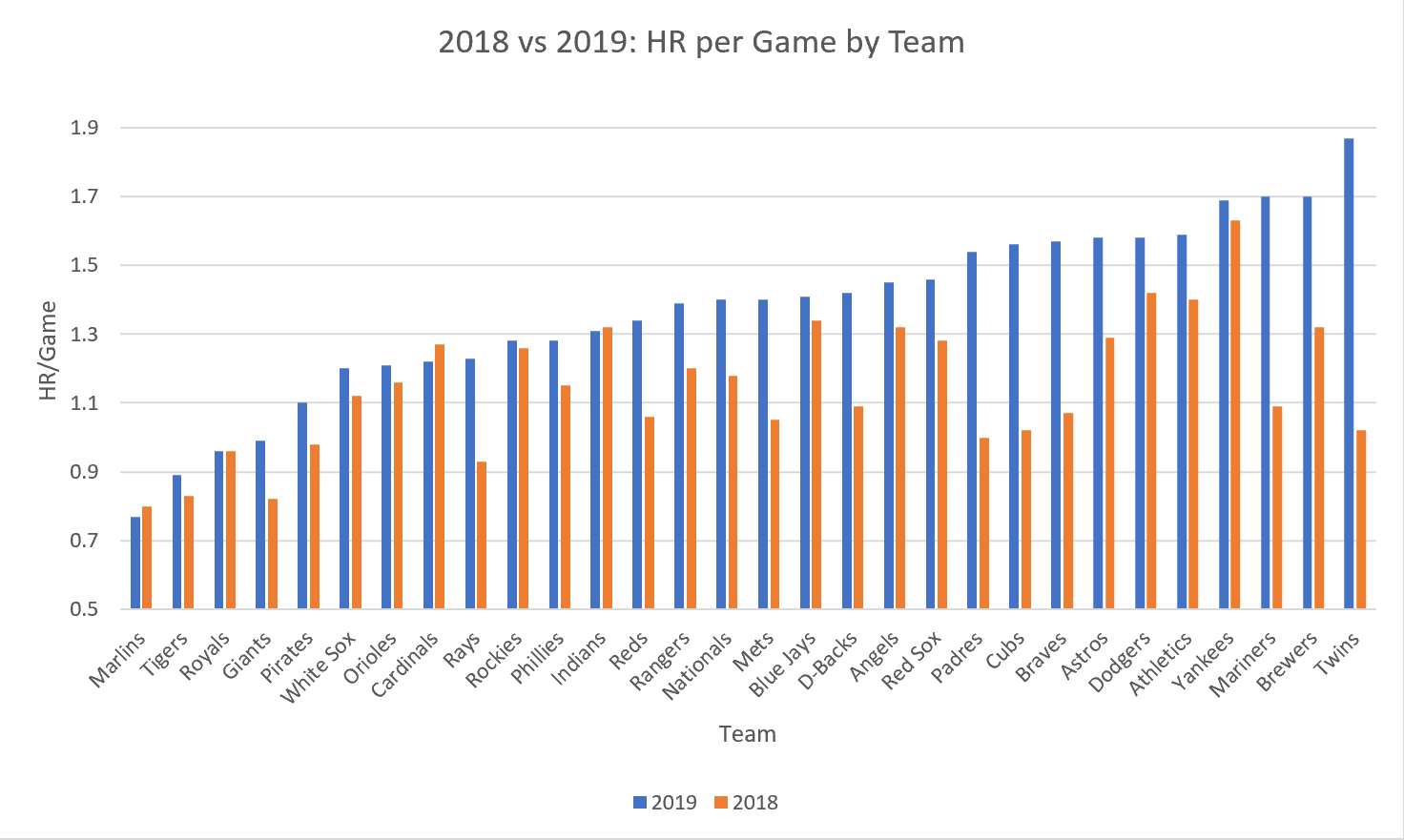 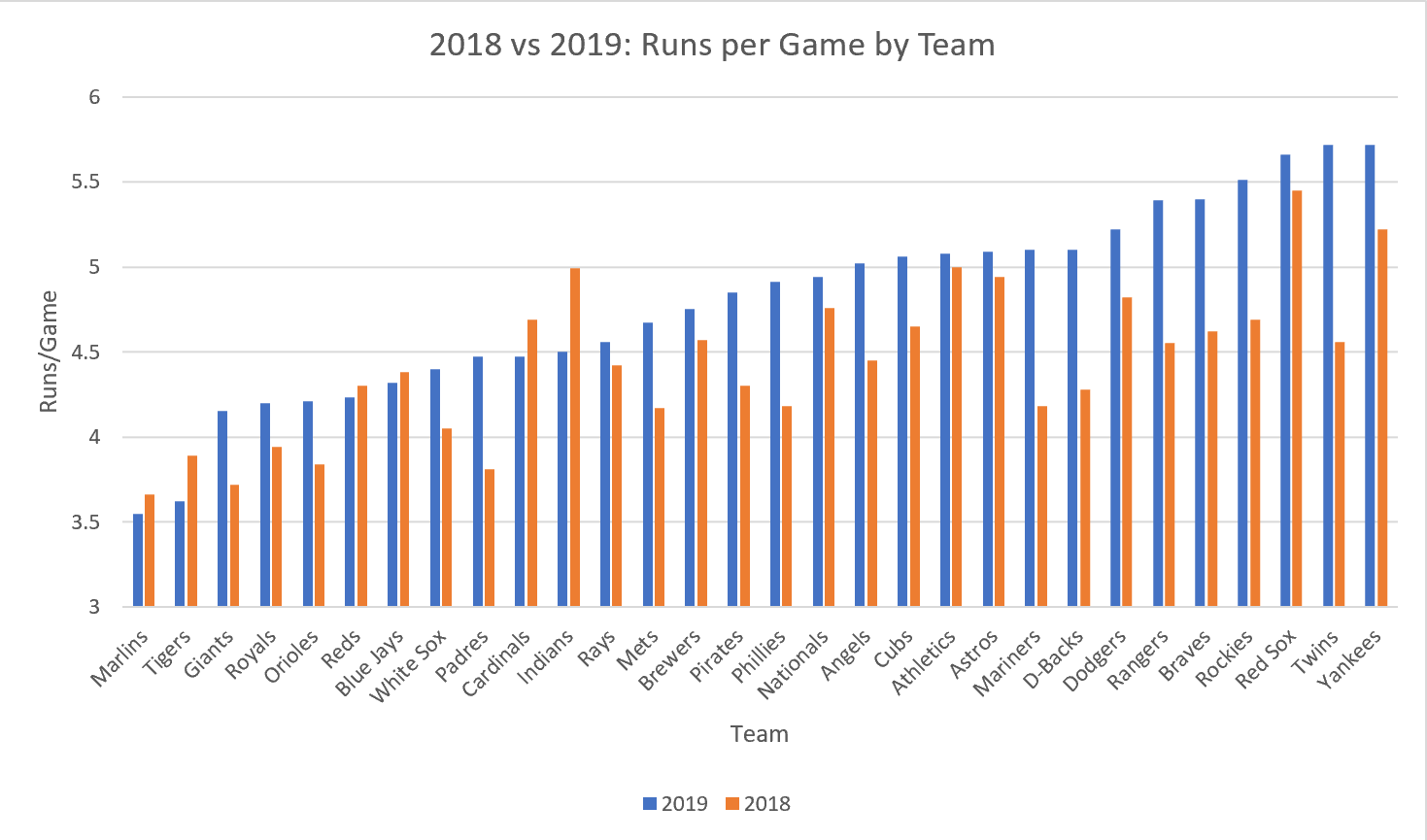 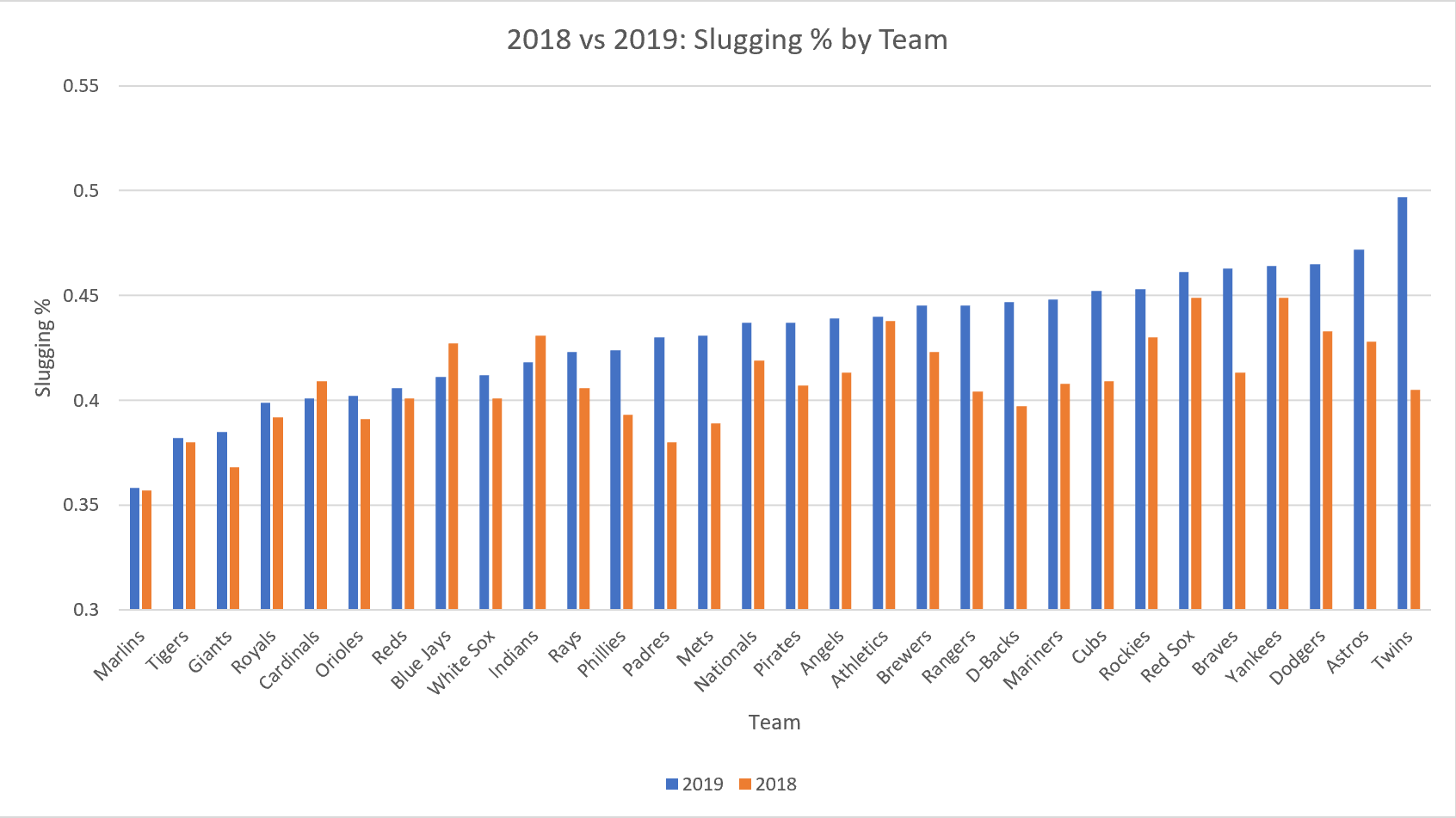 MLB players and fans have experienced more offense this season than any other in the history of the league.  Whether or not this is due to juiced baseballs, I can’t say.  However, there is certainly statistical evidence hinting towards it.  Lastly, I will leave you with one more stat.  The teams in the MLB this season have hit a record-breaking 3,691 home runs before the All-Star break, shattering the old record set in 2017 of 3,343 home runs.