Is the Madden Curse a Reality or a Myth?

Every year, one of the most anticipated video game releases is Madden NFL, the American football video game series developed by EA Sports.  Fans pre-order and rush to GameStop, Walmart, Target, and BestBuy on release day to be the first to get their hands on the latest game that has sold over 130 million copies since debuting in the 1990s.  One of the many features gamers look forward to heading up to the release is which athlete is lucky enough to graze the cover of the latest game.  This is a huge accomplishment for the athlete, as it shows his hard work and his great season is recognized and rewarded by being the cover athlete.  However, there is data that suggests being the cover athlete may not be as rewarding as people think.  This data has become known as the Madden Curse.

The Curse Strikes with Injury

The Madden Curse suggests that whichever athlete grazes the cover of the video game will have a disastrous season.  That disaster can be a result of a terrible injury or a severe drop-off in production.  The table below takes a look at the Madden Curse when it takes the form of a devastating injury. 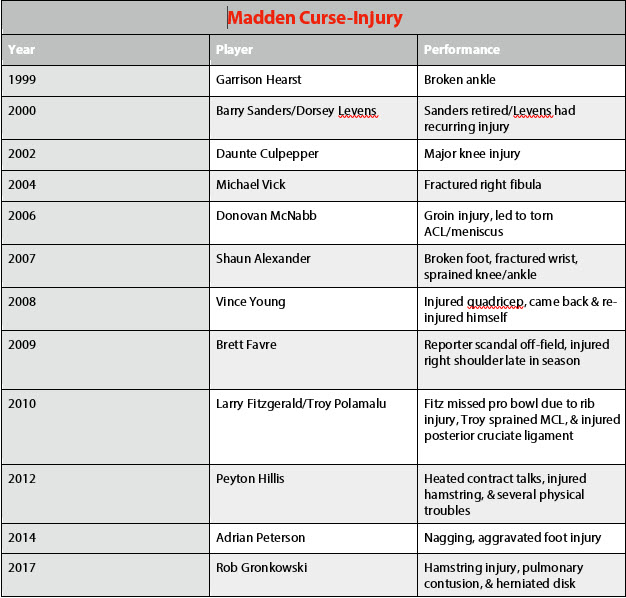 As the table shows, twelve of the twenty-one Madden NFL cover stars saw their season plagued by injuries.  Some of the highlights from this chart are Garrison Hearst, Michael Vick, and Rob Gronkowski.  Garrison Hearst, Georgia alum and 49er great, was coming off a great season and led the 49ers to the playoffs the following year.  However, during the playoffs, Hearst sustained a gruesome ankle injury, causing him to have surgery and ultimately missing the next two seasons.  Michael Vick, quarterback of the Atlanta Falcons, was a human highlight reel and was changing how the quarterback position was being played.  Less than three months after Vick was announced to be on the cover of Madden NFL 2004, he fractured his right fibula, making him miss the first eleven games that year.  Lastly, Rob Gronkowski, tight end for the New England Patriots, saw the Madden Curse strike him multiple times in 2017.  A hamstring injury, pulmonary contusion, and herniated disk sidelined him for the vast majority of the season.  As one can see, twelve Madden NFL cover stars have fallen victim of the curse due to injury.

The Curse Strikes with Poor Stats

However, a player having a huge statistical drop-off in production when featured on the game happens often as well.  The below table looks at times when the Madden Curse takes the form of severe poor performance compared to the previous year or years for the athlete. 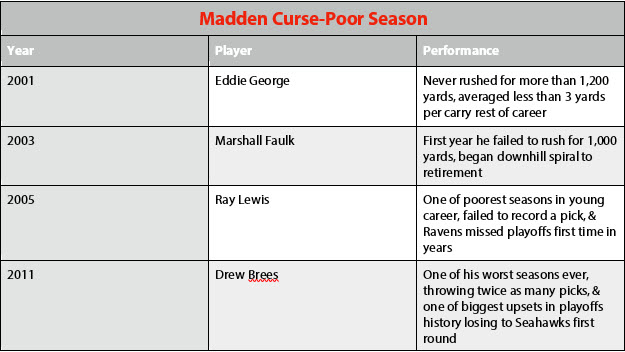 As the chart depicts, four players fell victim to the Madden Curse via very poor seasons compared to previous years.  Eddie George and Marshall Faulk, two of the most dominant and consistent backs in the early 2000s, never found their groove again after appearing on the cover of Madden.  Then there was Ray Lewis and Drew Brees, two of the best at their positions, who put up extremely disappointing numbers during their season as cover athlete.  Their performances had a direct impact on their teams as well, with the Ravens missing the playoffs entirely for the first time in years and the Saints becoming the first team ever to lose to a team with a losing record in the postseason.  Combine these two tables and sixteen of the twenty-one athletes who have been on the Madden NFL video game have been on the wrong side of the Madden Curse.

The Curse is Avoided

Now let’s take a look at the five football players who were able to beat the Madden Curse. 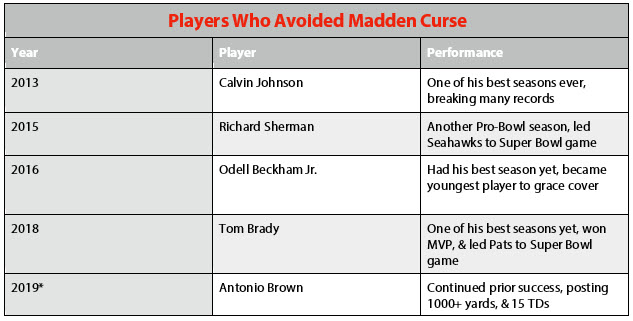 The above information shows that only six players have avoided the Madden Curse.  Perhaps the biggest takeaway from the table is four of the past five cover athletes have avoided this Curse.  However, it must be noted that the 2019 Madden star Antonio Brown still had major road bumps at the end of his year.  He missed the last game of the regular season because reports came out that he had a tense argument with Steelers’ quarterback Ben Roethlisberger, which resulted in him sitting out in practice.  These events ultimately ended Brown’s tenure in Pittsburgh, after his trade requests were granted and Brown was traded to the Oakland Raiders.  Since the Madden Curse is usually defined by injury and poor performance, Brown’s situation did not fall into the criteria.  Although, Brown’s recent events may trigger a new form for the Curse to take.  The NBA 2K franchise is famous for their cover athletes switching teams that year.  This season, Madden followed suit.

Still, one question still remains: Will Patrick Mahomes II, the new shiny superstar of the NFL and Madden NFL 20 cover star, fall victim to the Curse via injury, poor performance, or will his short Kansas City Chiefs’ career come to an end and a new chapter begin for the young quarterback? Or perhaps, Mahomes II can evade the Madden Curse, like he does with so many defenses and join the list of recent players who have dodged this Curse.  Regardless, what happens with Patrick Mahomes II this season will show if the Madden Curse is truly a reality or in fact, a myth.

Eric is a senior marketing major with a concentration in sports marketing at Samford University. He shares a strong passion for sports and looks forward to one day working in the sports industry.  Here is a link to his LinkedIn page: https://www.linkedin.com/in/ericccrocker/