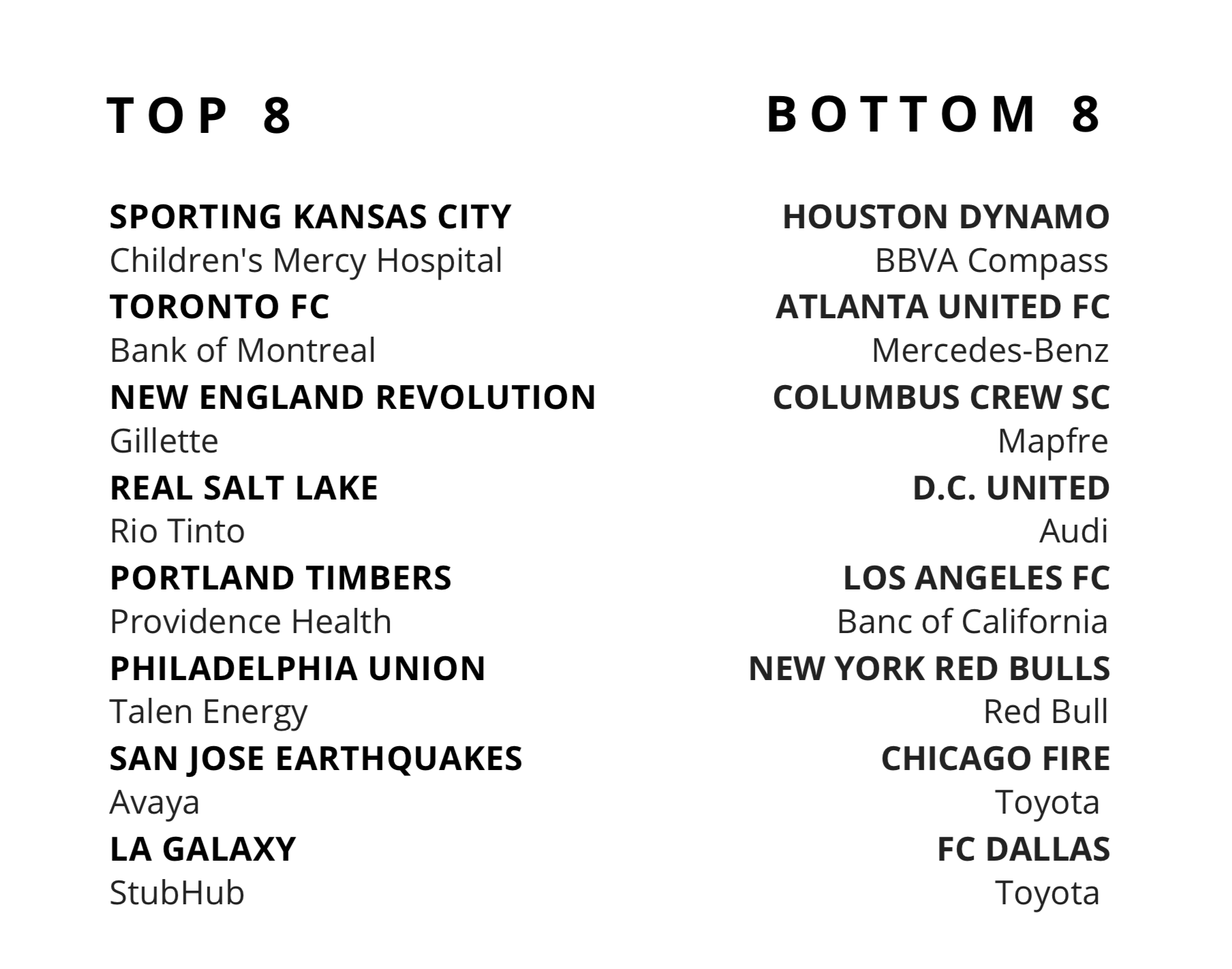 The contributing factors to success are based on the independent variables in the regression, distance, sponsor category, and sponsor size. The further the sponsor's headquarters are from the city where the stadium is located, the lower the percentage of team followers compared to MLS followers. This also contributes to the success of local sponsors as is further discussed below. Sponsors in the Health industry performed the best, with the largest percentage of their team's followers as compared to other industries. Sponsors in the beverages industry performed the worst. This was primarily caused by the New York Red Bulls, and their sponsor Red Bull. Based on the distance results, Red Bull is headquartered in Austria, with it's American headquarters in California further contributing to the category's lack of success. Sponsors with local sponsors held the highest percentage increase from the MLS account's followers. This is unique in comparison to other leagues as well as traditional sponsorship success measures. In assessing Twitter followers, there is a level of location bias that could lead someone who lived in Kansas City to follow both Sporting Kansas City and Children's Mercy Hospital without connecting the two. Regardless, we find local sponsors to be successful when compared to the baseline of MLS followers, as heavily contributed to by the success of Sporting Kansas City. The combination of these three factors allows for greater success in obtaining Twitter followers for Children's Mercy Hospital who also follow Sporting Kansas City.

This set of results compares the MLS teams with sponsors in the automobile industry: Atlanta United FC, Chicago Fire, DC United, and FC Dallas. Mercedes Benz was the only sponsor with the highest number of followers from the team they sponsor. Atlanta United FC had the largest number of followers for all car companies. Toyota sponsors both Chicago Fire and FC Dallas, but these two teams contribute to the lowest number of followers within the set. All four of these teams are also in the bottom eight of the overall MLS results. The three companies are headquartered internationally, which according to the regression results, contributes to lower success for the sponsorship. Toyota produces lesser expensive cars than Mercedes-Benz and Audi, catering more to the average American soccer fan. This yields them greater success across all fans, regardless of the team they support. The height of the line on the graph below is the number of mutual followers between each team and sponsor. 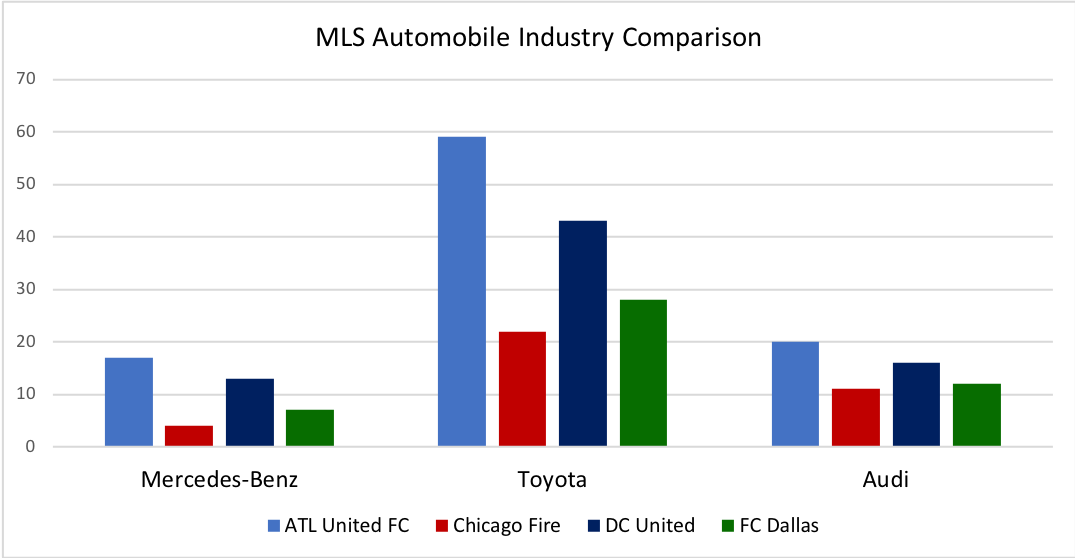 In the MLS, local sponsors found the greatest level of success. We already saw how the local sponsor of Sporting Kansas City contributed to its level of success and will look at two other teams that also placed in the top 8 of MLS teams. New England Revolution is sponsored by Gillette, a razor brand. The San Jose Earthquakes are sponsored by Avaya, a technology company. Both companies are internationally known but headquartered in the city where the team they sponsor is also headquartered. From their placement in the top eight, we can conclude that the distance variable is a greater indicator of success than sponsor size. The regression results also show this to be true.

On the other side, internationally headquartered sponsors performed poorly. Six of the bottom eight teams are sponsored by an internationally known sponsor. Sponsors such as Red Bull, Mercedes-Benz, Mapfre and Toyota performed poorly and had less followers from the team they sponsor than from the MLS Twitter account. For Toyota, the two teams that performed the worst, Chicago Fire and FC Dallas are both sponsored by Toyota. Toyota's headquarters are in Japan, with their US headquarters in Texas, outside of Dallas. Even with headquarters near to FC Dallas, Chicago Fire still had more followers who followed Toyota than FC Dallas. Consistently in the MLS, and across all professional sports leagues, internationally known sponsors are unsuccessful in gaining customers via Twitter.

Major League Soccer teams had the lowest average percentage increase in mutual followers than any other professional league. The MLB, NBA, NFL, and NHL all performed better and yielded greater success for their sponsors. But, the variable of distance and sponsor size perform similarly within the MLS as the variable did across all professional leagues. But, sponsors in the health industry performed the best in the MLS as compared to the overall top performing industries across all leagues of Food/Restaurants and Telecommunications. With less than half of MLS sponsors having more than 50,000 twitter followers, the overall potential customer impact through Twitter is minimal. Areas for future research would stem from the weakness found in the location bias. Looking at team followers that are not located in the same city as the team would provide the opportunity to eliminate the bias found for sponsors located near their team.