NBA Players in Which Positions Offer the Greatest ROI?

Published on October 15, 2019 by Courtney Williams   Share this on:

In the NBA, it’s normal to see a general manager spend a significant portion of a team’s salary cap on a couple of players, each of whom is one of the best at his position. The GMs justify their spending by arguing that the star players will significantly improve their team’s chances of making it to the playoffs and winning a championship, but how often do these players actually provide a good return on investment through their performance on the court? In other words, how often do we see the players with the greatest salaries advance to the playoffs?

For each of the last 20 seasons, I found the 5 highest-paid point guards (PG), shooting guards (SG), small forwards (SF), power forwards (PF), and centers (C), and then I determined whether or not their respective teams made it to the playoffs and won the championship. My findings have been compiled in the tables below.

The chart below shows how much money was spent on the salaries of the 5 highest-paid players in each position over the last 20 years. 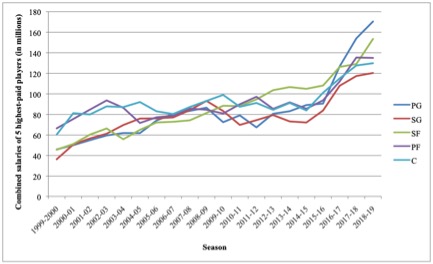 The salaries of players in all positions have been steadily increasing due to the NBA’s ever-growing salary cap. However, general managers’ valuation of players in different positions has seemingly changed over time. Whereas the highest-paid centers and power forwards used to earn significantly more money than the highest-paid players in other positions, the league’s top point guards, small forwards, and power forwards now have the greatest combined earnings. The money that is devoted to these players’ salaries is well spent because, as we saw in Table B, point guards, small forwards, and power forwards are the types of players who most often lead their teams to the playoffs and NBA titles.

During the NBA’s free agency period, teams can make trades and negotiate deals in order to acquire players who recently became eligible to be signed. The best free agents normally sign contracts worth tens of millions of dollars, and the general managers are willing to pay them these grand salaries because they believe that the players will help their teams win games and ultimately advance to the playoffs. That being said, we’ve learned that power forwards, point guards, and small forwards tend to offer the greatest ROI when it comes to playoff appearances and championship victories, so teams looking to acquire a top player would be wise to invest in someone who plays one of these three positions.