Scoring Low on the PGA Tour

Through watching golf growing up, and having a father who was a golf pro, I had always heard how important putting was to being a good golfer. Watch any golf tournament or show on television and you’re sure to hear something about how the best putters are the ones who win, and how working on your short game is certain to lead to shooting lower scores. However, with the way golf, and golfers, are evolving, it seems like today being able to bomb your driver is necessary to win. Due to advanced equipment and training, golfers today are hitting the ball farther than ever before. This raises the question as to which aspect of your golf game is most important for shooting lower scores. I thought the best way to determine this was to look at what the best golfers on tour this year excel at.

This article will statistically break down different categories for the ten lowest scoring players on the PGA Tour this season. We will first observe their average driving distances, greens in regulation percentages, and average putts per hole. Then, for better comparison to other golfers on tour, we will look at their strokes gained from tee to green and their strokes gained from putting. There will be more context provided about these categories as you read to better understand what these statistics are really saying. 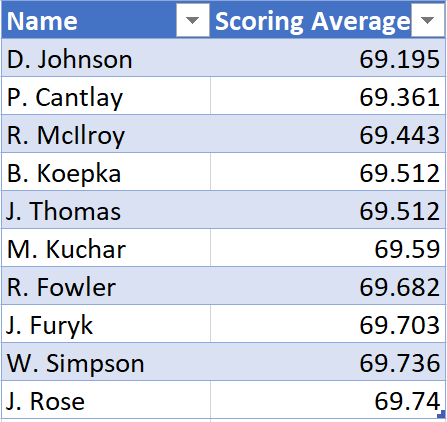 The table above shows the top ten best golfers on tour this year, according to their average scores. As we can see, each of these golfers remarkably shoot under 70 on average. While the typical golf course has a par of 72, and the average tour player shoots a 71.332, we can see that these golfers are certainly doing something right in their game.

The category I picked to show the importance of the long ball is average driving distance. This statistic shows the average yards per drive for each of these players. 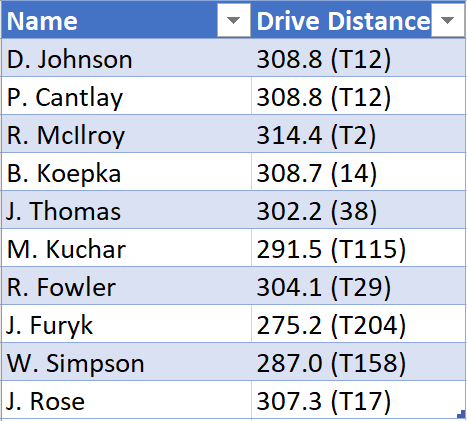 The table above shows how far these players hit their driver and their rank on tour this season. Rory McIlroy is the only player in our sample who falls inside the top ten for driving distance. However, with the average tour player’s drive distance being 292.6 yards, we can see that seven of our ten are above average drivers. These same seven all have an average drive of over 300 yards.

The category I picked to show the importance of your irons is greens in regulation percentage. This statistic shows how often these players give themselves a chance at a birdie putt on any given hole. 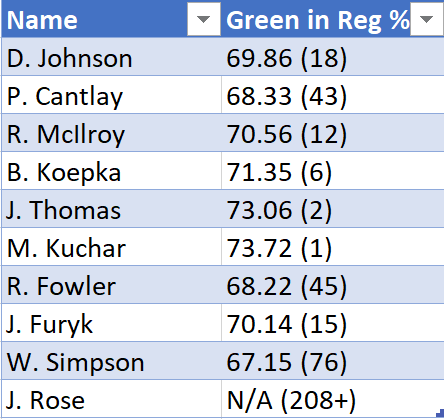 I could not find a percentage for Justin Rose as he does not rank inside the top 208 players on tour this season in this category. However, we can see that the other nine golfers all land inside the top 76 on tour this season, with six of them being in the top 20. With the average player on tour hitting 65.54% of his greens in regulation, each of our top nine are well above the average.

The category I picked to show the importance of putting is average putts per hole. This statistic shows how many putts it takes these players on average to finish out a hole. 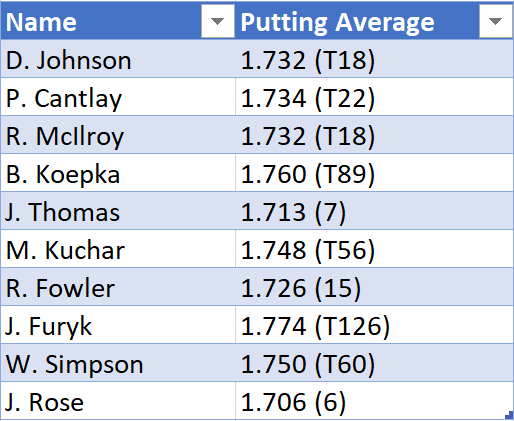 The table above shows that nine of our ten fall inside the top 100 players on tour this season, with six landing inside the top 25. With the average putts per hole on tour being 1.773, we can observe that all of our players are above average putters, with the exception of Jim Furyk, who just barely misses the cut at 1.774.

Strokes Gained statistics, abbreviated GS in the golf world, are advanced statistics that give more context as to how these players perform compared to their peers. Pgatour.com describes strokes gained from tee-to-green as “the per round average number of strokes the player was better or worse than the field average on the same course and event minus the player strokes gained putting value.” It also describes strokes gained from putting as “the number of putts a player takes from a specific distance is measured against a statistical baseline to determine the player’s strokes gained or lost on a hole.” Basically, these statistics give us more insight as to how well these players hit and putt the ball in comparison to other golfers. 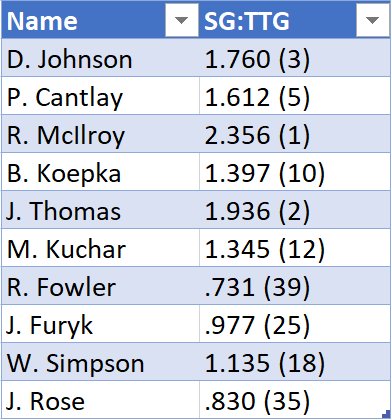 The table above shows how important it is to get on the green before other players. Each of our top ten players take less shots on average to get from the tee box to the green than the average tour player. In fact, all ten find themselves in the top 40 in this category. Additionally, the five lowest scorers on tour this year all rank inside the top ten in this area. 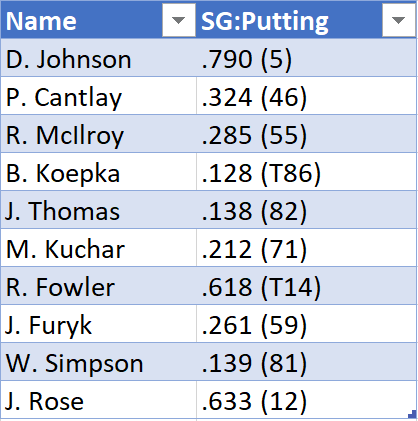 Once again, this table shows why these players are so dominant in their sport. All ten of these players are ranked in the top 100 on tour this year when it comes to making putts compared to the average tour player. While each of these golfers are very good in this category, Dustin Johnson is the only golfer in our sample who lands inside the top ten.

While looking through these statistics, we can see why and how these ten golfers are the best at their sport. With only a few exceptions, all of these golfers rank highly in each of these categories. This causes me to believe that there is not one specific area of golf that clearly leads to more success. We can see how important it is to be good at both striking the ball and finishing around the hole. However, when we compare these players to their peers, it is obvious how crucial it is to get on the green with as few strokes as possible, giving yourself more leeway for missed putts. Statistically, the fewer shots it takes you to get on the green, the lower your scores will be.