The United States team has reached this level of consistent success through being an efficient, accurate, and aggressive team, dominating on both sides of the pitch, and having the most World Cup experience of any team.  And the statistics back it up.

Below, this article will present the statistics from the 2019 Women’s World Cup.  These statistics show just how impressive the American women have been this year, and how they got to the championship game for a third straight time. 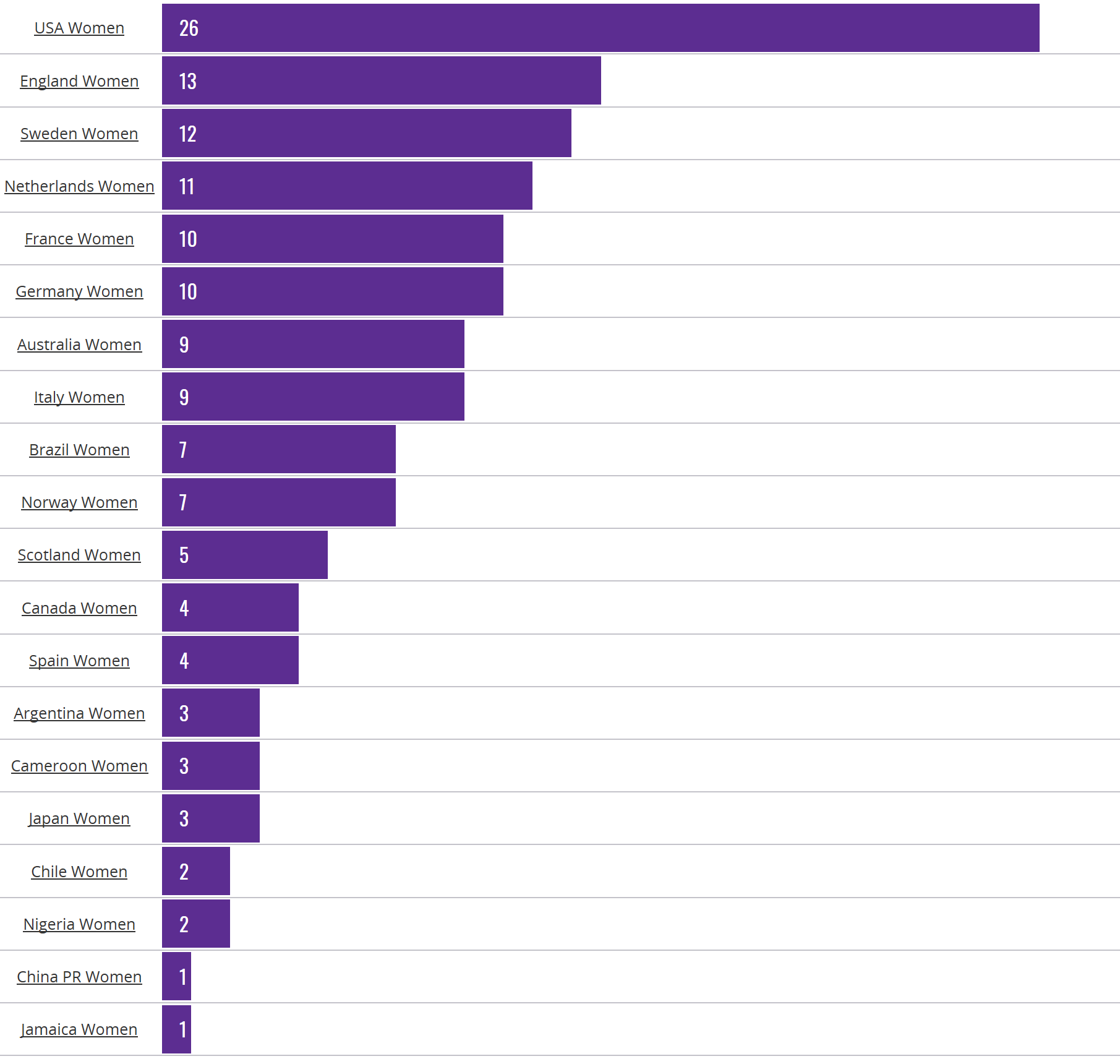 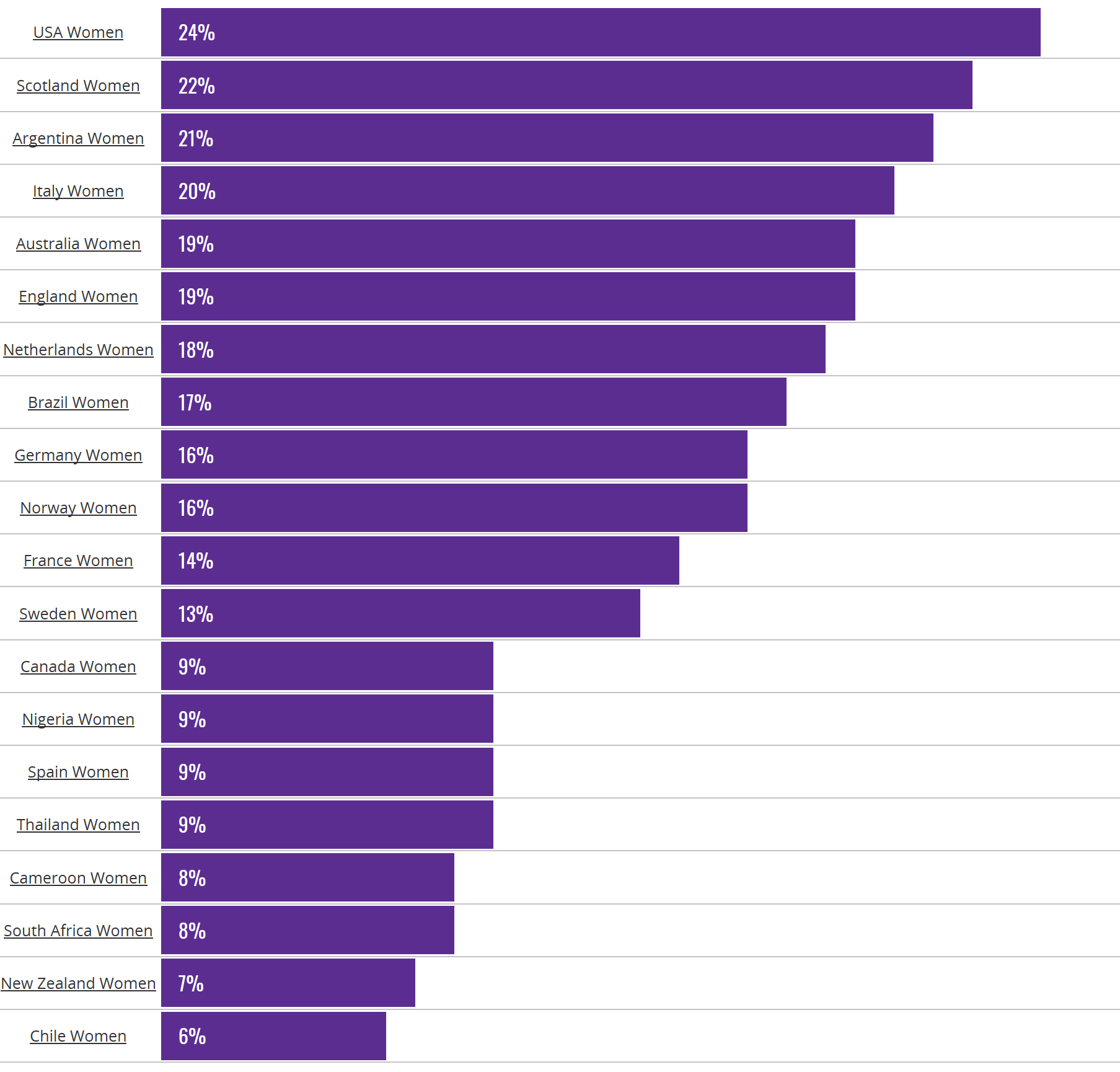 Once again, we see the United States at the top of this chart.  They land the number one spot in Goal Conversion at 24%.  Goal Conversion is a statistic that measures the amount of goals scored divided by the number of total shots, excluding blocked shots.  This means that the United States team this year has been the most accurate goal scoring team in the World Cup.  Accurate shooting leads to an efficient offense certain to produce success. 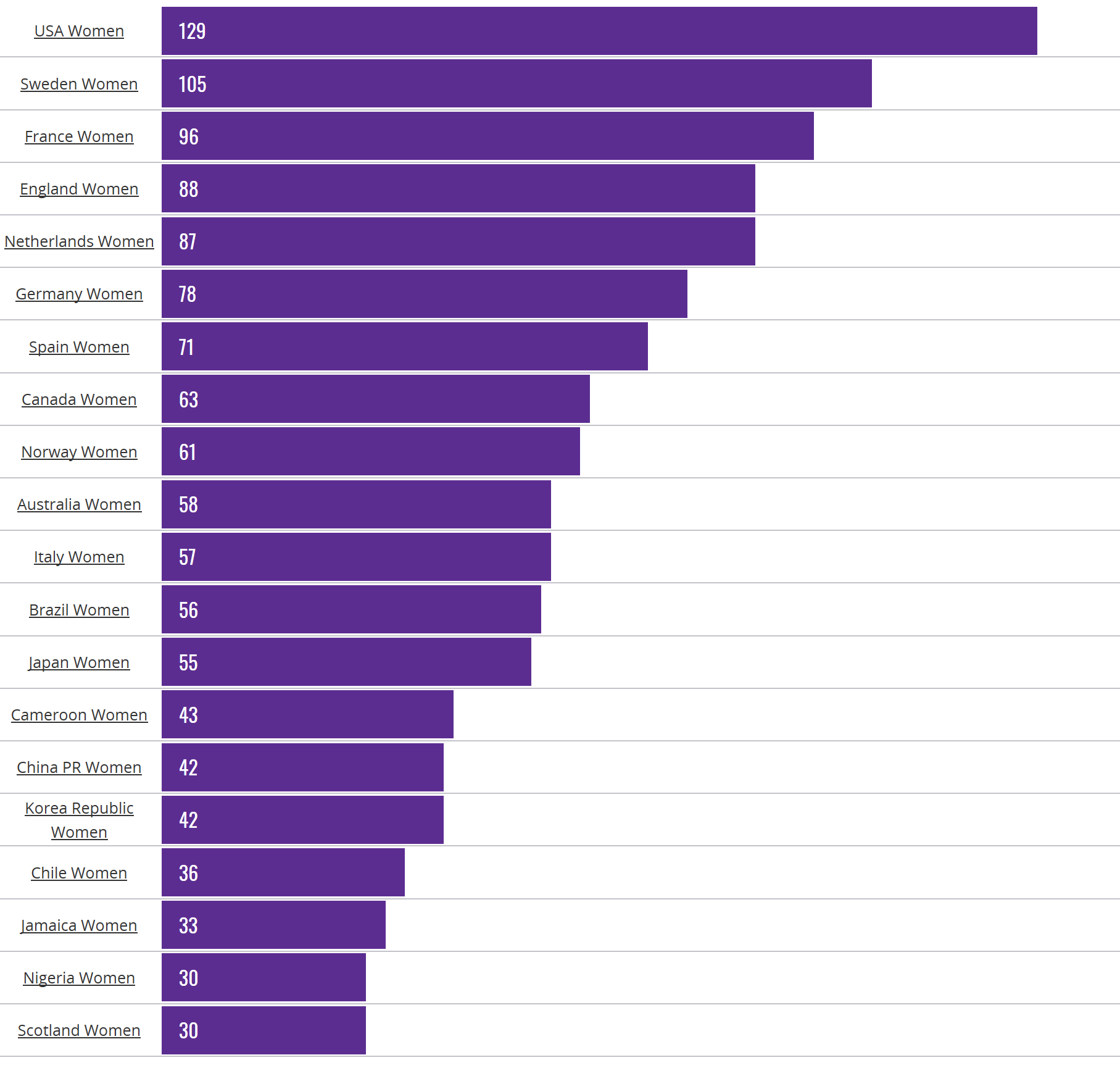 Yet again, the United States team ranks first in total shots.  The total shots statistic includes all shots taken by a team, including blocked shots.  This shows that the U.S. team is the most aggressive when it comes to offense, while also demonstrating their positive time of possession.  The U.S. team is relentless on offense and doesn’t allow other defenses to rest. 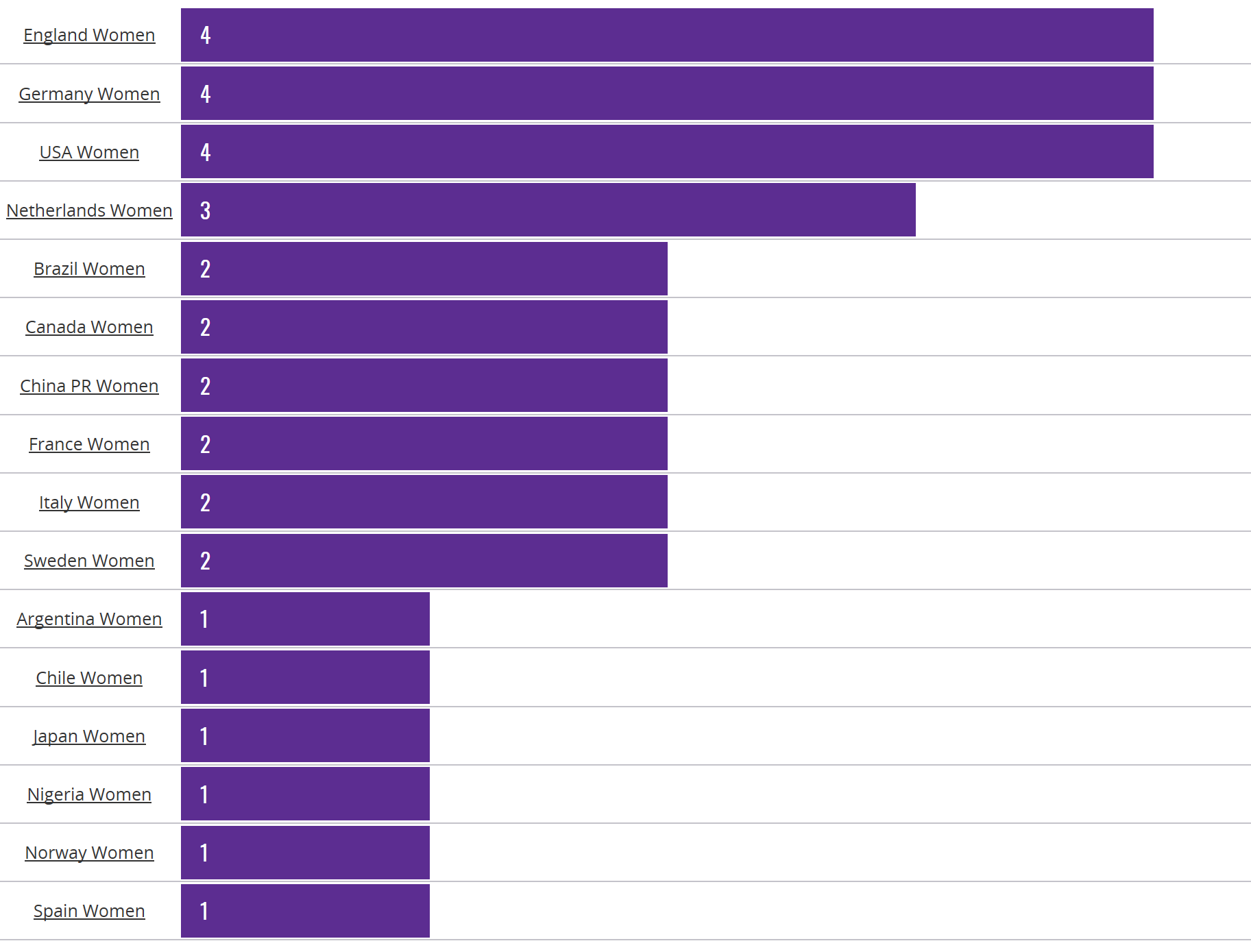 The United States team tied for the most clean sheets this World Cup.  A “clean sheet” is soccer terminology for shutting out the other team, or not allowing them to score.  As seen above, the United States team completed four in their seven games in the tournament.  Although this may not seem as impressive as their offensive statistics, it shows that the U.S. team is very solid on both sides of the pitch. 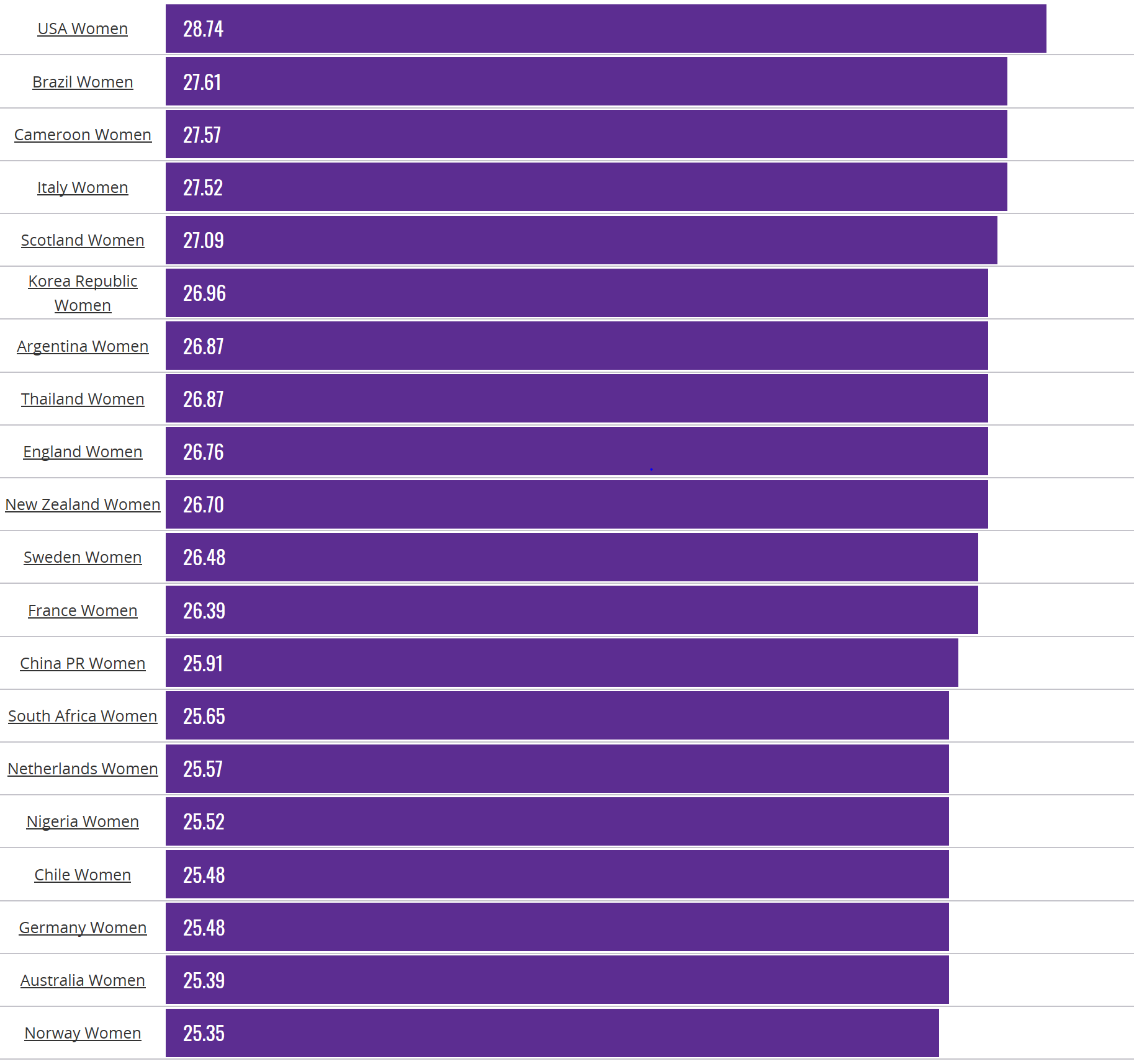 Lastly, this chart displays the average ages of the teams in the World Cup.  As can be seen, the United States team is the oldest among the field, with an average age of 28.74 years old.  Typically, in sports, having the oldest team is not necessarily a benefit.  However, in the World Cup, experience is crucial.  Being in the last two championship games and having many of those same players returning for this World Cup made the U.S. team by far the most experienced and ready to win this year.

This article has displayed the dominance of the United States Women’s National soccer team by providing statistics that exemplify their efficiency, balance, and experience as a team.  These numbers demonstrate the all-around greatness of the U.S. team and how the U.S. women lead in almost every category.  It is no wonder how or why they made the finals for a third straight time and repeated as championships this year.

Connor just completed his sophomore year at Purdue University, where he is pursuing a double major in actuarial sciences and applied statistics, with a minor in management.  He has had a passion for both sports and statistics since a very young age, and enjoys discovering all the new information statistics can give us about sports.  LinkedIn