Novak Djokovic just defeated Roger Federer in the longest Wimbledon final ever to capture his 16th Grand Slam victory. This victory places Djokovic third all-time in Grand Slam wins behind only Rafael Nadal, with 18, and Roger Federer, with 20. What’s truly remarkable is how these three tennis legends, who fill the top three spots in Grand Slam victories, have all dominated the sport in the same era. This Big 3 has won the last 11 Grand Slam tournaments, 4 going to Djokovic, 4 to Nadal, and 3 to Federer. They have also won 54 of the last 65 Grand Slam tournaments since Wimbledon in 2003.

Clearly, the Big 3 of Djokovic, Nadal, and Federer has owned the sport of tennis this entire era. However, this is not the first time the sport has seen a select few dominate the game. This raises the question: Is the current Big 3 in tennis the best the sport has ever seen?

Furthermore, this article will then attempt to answer which of the Big 3 is the greatest. It will do this through comparing their careers, statistics, and head-to-head performances.

There seems to be three main eras in tennis history where the sport was dominated by a group of three men. These eras would be the late 70s and 80s, consisting of Jimmy Connors, Bjorn Borg and John McEnroe, the 90s, consisting of Jim Courier, Pete Sampras and Andre Agassi, and the current era, consisting of Djokovic, Nadal and Federer.

The table above shows the success of each Big 3 in ATP Tour Masters 1000 events during their given era. ATP Tour Masters 1000 tournaments are the third highest ranking tournaments in the sport behind the Grand Slam tournaments and the ATP Finals. As we can see from the graph above, each group of players found success in these events, but none more than the current Big 3. While the Courier-Sampras-Agassi group only won 25% of their ATP matches and the Connors-Borg-McEnroe group won an impressive 45.1%, the current Big 3 has been victorious a whopping 63.8% of the time.

Who is the GOAT?

First, to compare the Big 3, I will look at their career statistics.

As we can see here, all three men have very impressive winning percentages for their careers. Nadal has the best at 83.0%, barely edging out Djokovic’s 82.7% and Federer’s 82.2%. However, Federer has the most titles in his career at 102, while Nadal and Djokovic only have 82 and 75, respectively. In terms of championship success, Federer takes the cake. In terms of winning consistency, Nadal is best. However, Djokovic is the youngest and seems to be on pace to overthrow both of these men. 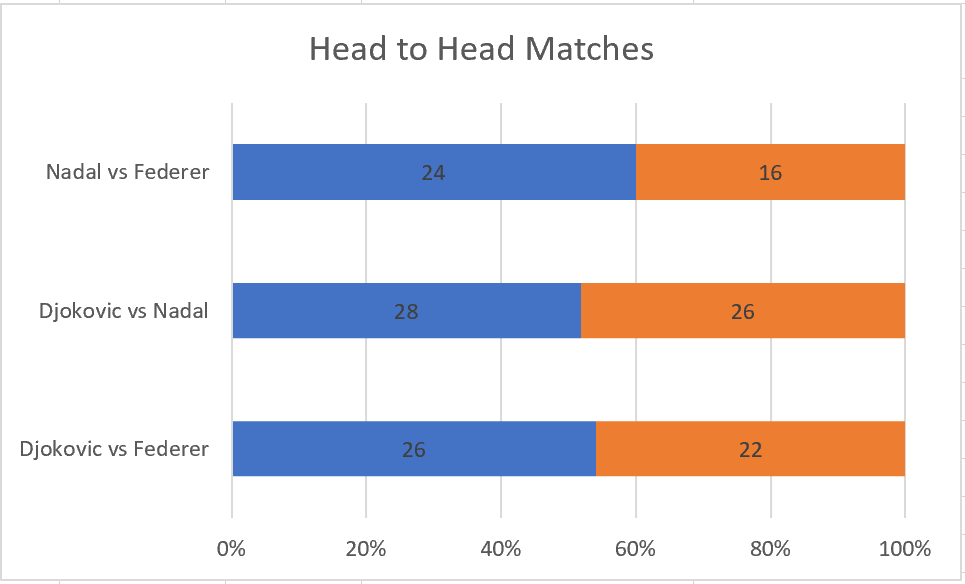 Next, the table below presents the breakdown of each player’s success in the Grand Slam events since Wimbledon of 2003.

Lastly, this graph shows the direct success each of these players has had against one another in their head-to-head Grand Slam matchups. 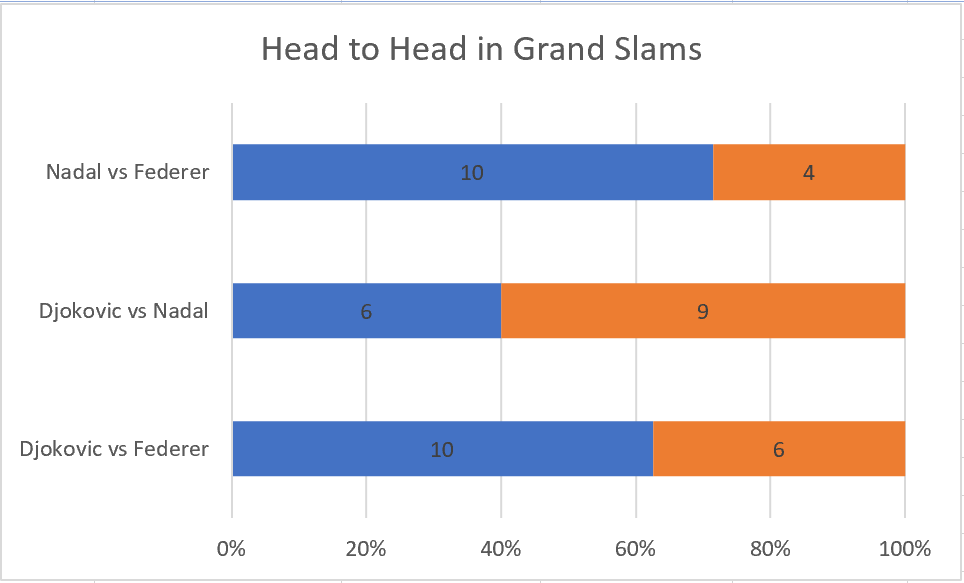 Clearly, today’s Big 3 of Djokovic, Nadal and Federer is the most dominating group of tennis players the sport has ever seen. Their impressive winning percentages and major performances are unmatched. However, to pick one of these three to call the GOAT is nearly impossible. The answer depends on which court they’re playing on, what the stage is, and what the future holds for each player. However, one thing that can be said for sure is that this era’s Big 3 is the best the sport has ever witnessed.