The Importance of the Skill Positions: Running Back

Published on January 16, 2019 by Patrick Schilling   Share this on:

The Importance of the Skill Positions: Running Back

If you’re a fan of the NFL, this may be the most exciting position in today’s game. If you’re a running back, on the other hand, you can’t enter an offseason expecting a payday like a QB can. Maybe the best running back in the game, Le’veon Bell, forfeited his entire year salary from the franchise tag just because he didn’t get offered the contract that he thought he deserved. So just how much is it worth to pay you RB if you’re looking to build a contender? Do you need to pay your back enough money that could push him into a top-five contract? Or can you make it work with a middle of the road contract? 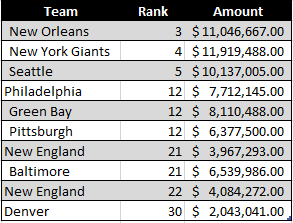 Right off the bat, it’s clear to see that the last ten Super Bowl winners have opted for the higher paid running back unlike the quarterbacks. Overall, the running backs have been the fourth highest paid position by the Super Bowl champions with an average payroll at fourteenth meanwhile the QBs ranked at eighteenth.  Along with that, comparing the top five paid running back cores and quarterback groups of Lombardi winners, only one was in the top five of both. That idea is an easy one, either your QB or your RB needs to be paid and be a top-level player in their position, the trick is not overpaying an underperforming player.

One of the more interesting aspects of Super Bowl champion running backs is just how affordable they’ve been. Over the last ten teams, the average RB cap hit is just $4,827,761. If this were this season, that cap hit would be just outside of the top ten, just behind Devonta Freeman. On the flip side, the bottom ten teams on average over the same number of seasons have given their running backs on average $12,390,500. That’s an average difference of $7,562,739. That number is incredibly revealing. In the NFL at this moment you do not need to pay your running back over $6 million in their total cap hit a season.

If you look at the top ten in cap hits this season, every one of them is over $5 million. Of those ten, five of those teams are virtually out of the playoffs. The number one spot is occupied by LeSean McCoy at $8.95m, two is Todd Gurley at $7.22m and third is Zeke Elliot at $6.8m. Two of those seem worth it this season, one does not. Looking at past champions makes it clear that you need a good running back, but you don’t need to overpay to have one. 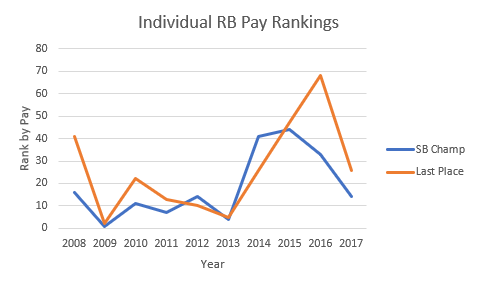 This graph shows just how close the price paid by last-place teams and Super Bowl champions for a running back is. As similar as these numbers are, if I were the general manager for an NFL team, I would be looking for a running back that is either willing to take less money or an RB around eight to twelve in the league in terms of production and what they’ll be worth.