The Importance of the Skill Positions: Wide Receiver

The Importance of the Skill Positions: Wide Receiver

The wide receiver position is truly where I believe NFL teams should be spending their money on the offensive side of the ball. Of the past ten Super Bowl champions, just one team had a WR payroll that was outside of the top fifteen in the league. The New York Giants are that team and although the payroll would show that they were twenty-fourth in the league in the WR department, the contract Victor Cruz would get after that year took them way up on the list. For nine teams to all be in the top fifteen over ten years it shows that nothing has changed in how important this position is to a team’s success. Looking at the chart, it’s clear just how much these teams are paying their wideouts compared to what they paid their quarterbacks and running backs on average. 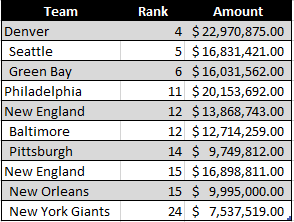 In terms of an individual wideout pay for a team, the difference between last place teams and teams that go on to hoist the Lombardi Trophy is even more drastic. In the last ten years, only three times has the last place team had a higher cap hit for their highest paid wide receiver than the Super Bowl Champion. Just two times has the bottom team had a higher hit for their second-place receiver. Only one Champion had a lower first and second receiver in terms of cap hits and that was the Giants in 2011 having the sixty-fourth and sixty-fifth highest cap hits for their wideouts.

Along with that, the averages for the cap hit rank between Super Bowl teams and bottom of the ladder teams are not even close. The overall average the past ten seasons is about twenty-eight spots. The average cap hit position for a SB winner was twenty-ninth versus the fifty-seventh place that the bottom team had. Now it’s easy to attribute this to a rebuild or a team trying to save money or pumping their money into a different position…but I don’t think so. Looking at the averages season by season, it almost looks unreasonable as to how much less the bottom team is paying their wideouts that the SB Champion. 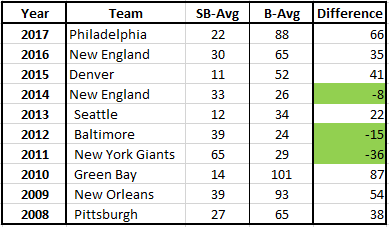 Even with the three times where the exception showed up, two were by very small differences and the other seems skewed by the sheer talent the Giants possessed in both young and undrafted receivers. Along with just these numbers, of all the positions, wide receiver was the only offensive position that less than four times in the past ten seasons, the average of the bottom ten teams each year had a higher average cap hit for the wide receivers than the SB champion did. Just one time did the bottom third of the league’s average, not just the lowest on offense, the lowest of any position in the NFL. To say that the position of WR is important is an understatement; so far it seems like the most important position on offense and a necessity to getting a ring.