The Importance of the Skill Positions: Tight End

The Importance of the Skill Positions: Tight End

The tight end is often one of the most overlooked positions on both the offensive side of the ball as well as the entire fifty-three-man roster. Surprisingly, the tight end spot came out as the third highest average cap hit for a Super Bowl team’s tight end group behind wide receivers and linebackers. It’s surprising because especially to fans, this is not a glorifying position and one that spends a lot of time grinding in the trenches and taking hits for their teammates. There are a few however that stick out in the league. Rob Gronkowski, Travis Kelce and Zach Ertz are three that do, but three that also have very big personalities.  Looking at the chart of SB winning tight end core’s cap hits, it’s higher than I would’ve expected. 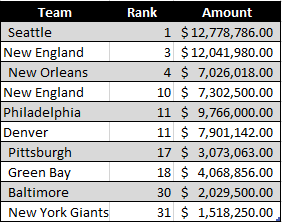 Minus two teams, the cap hit for all other champions was in the top two-thirds of the league for their winning year. However, the individual cap hits on the two ends of the spectrum are flipped versus the entire group. For last place teams in the last ten years, the average rank of cap hit for their tight end is seventeenth whereas the average for SB Champions is twenty-first. So, what’s the trend here? Or the answer at tight end? I think it comes down to just how skilled your tight end is and what you think they’re worth. In my mind, there are always around five supremely skilled tight ends in the league and after that a significant drop-off. The trick is making sure to pay the right guy the correct amount of money that makes it worthwhile for your offense and for your season.

Looking at the top five cap hits at tight end for each of the past five years, there’s a mix of results as far as overall team finish goes. Of the twenty-five teams that attributed to them, thirteen of those teams went on to make the playoffs and twelve did not. Of those same twenty-five teams, just one has won the Super Bowl (the Seahawks in 2013) while having a top five cap hit at tight end. 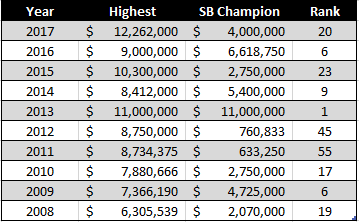 One of the more impressive aspects of SB winner’s tight ends is that even when they were higher up on the list of cap hits, they were able to save a lot of money. Those inside of the top ten, not counting 2013 when they did have the highest paid tight end, are still more than $2m less than what the overall highest cap hit was being paid. Most other teams were paying their TEs more than $5m less than that if they weren't’t inside the top ten. For that kind of value at the tight end position, it’s clear that a valuable tight end can be vital to a championship team but it’s not necessary to pay your tight end enough to make him the highest paid at his position.