Is it All in the Trenches? Offensive Line

Is it All in the Trenches? Offensive Line

It’s a general fact around the NFL that offensive lineman do not get the credit they deserve for taking a beating blocking for their quarterback and running back on every single play of the game. They’re at a standstill while fast, strong and athletic defenders slam into them, try to throw them down and run them over en route to the backfield. 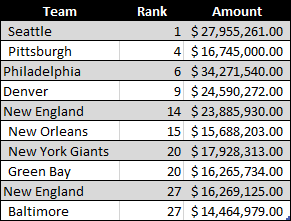 As for entire position groups, the offensive line is one of only two groups that have four of the past ten Super Bowl Champions in the top ten highest paid groups. Seattle, in particular, paid their offensive line corps an incredible amount of money while getting off by not paying their QBs very much. In relation to that season specifically, the average cap hit rank of the bottom ten teams that year was just eighteenth.

Interestingly, besides Denver in 2015, no other team that had a group of offensive linemen with a cap hit inside of the top ten also had a quarterback group inside of the top ten in total cap hit. The next closest team to do so was Pittsburgh in the 2008 Super Bowl with a cap hit of thirteenth. The last of those four teams, Philadelphia, had a total QB cap hit that ranked twenty-sixth.

Offensive linemen also ranked tied for third as the highest group of all the positions with the highest average cap hit at fourteenth. They were behind both wide receivers (twelfth) and linebackers (thirteenth) who we’ll get to later. On an individual level, however, the numbers for an offensive lineman at each of their positions, guard, tackle and center become a lot more interesting.

Starting with the center, SB Champion center’s cap hits are not necessarily as high as one might think. Overall, they rank twenty-second on average as individual centers for the last ten winners. That marks the second lowest average for any offensive position. This was very surprising to me at least because I believed that the best centers in the league not only helped run the offense with their QB but helped the rest of the line as well.  I also thought to get a center like this would be very costly to a team, but it seems that that is not the case.

As for the guard position on the line, unfortunately for them, they don’t get quite the paydays that guards in the NBA receive. This ranks as the overall lowest average cap hit for the highest paid guard per Super Bowl Champion team all the way down at twenty-fifth. It also ranks as the third lowest average cap hit for positions on both sides of the football in front of only defensive ends and cornerbacks. Guards also had the biggest difference in what the Super Bowl champion paid their highest paid guard versus what was paid to the highest paid guard in the league. The difference is $6.7m as opposed to $5.7m for tackles and $5.8m for centers. 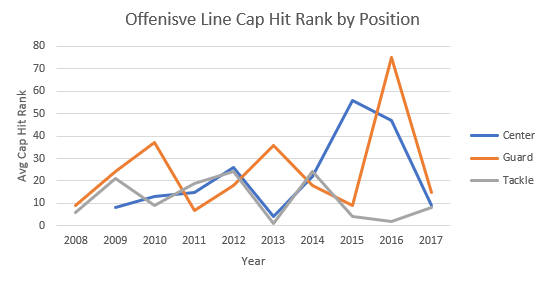 It was surprising to me that this was overall the highest individually paid position on the offensive side of the ball for the last ten Super Bowl winners. I figured it would be the quarterback or the wide receiver, not the tackle position. It goes to show just how important a stapled veteran on your offensive line can do for your team and how much they may truly be worth.