The Middle of the Defense: Linebackers

The Middle of the Defense: Linebackers

The position of linebacker has always been one of the more glorified positions on the defensive side of the ball. From currently stars like Luke Kuechly, Khalil Mack and Bobby Wagner to former stars such as Ray Lewis or Bryan Urlacher they have always received a lot of attention and more importantly, large contracts. Of the top five most valuable defensive contracts in the NFL, two are linebackers.

On the surface, the position still seems to be headlining needs for teams and that they’re willing to pay whatever is needed to avoid a group of rookies or young linebackers to man the defense. Was it as important however to the recent SB Champions? It seems so. The linebacker position was overall the second highest paid position group on the entire team, one spot behind the wide receiving corps. Along with that, it also had the largest gap between what the last ten SB winners averaged in cap hit for their linebackers versus what the average was of the bottom ten teams from the last ten season paid in terms of their cap hits. The winning linebackers were paid an average of thirteenth highest in the league whereas the bottom of the league averaged nineteenth highest in their cap hit. That’s borderline top third versus borderline bottom third and by far the biggest discrepancy of any position.

The linebacker position is one of three position groups overall that had three winners with cap hits in the top five in the league and the only one that had either four or five teams. Except for Seattle’s Super Bowl victory (a team that had a cap hit inside the top three for both the offensive and defensive line) every other team had a linebacker group that was compensated very well. 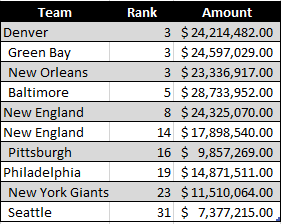 Interestingly, from 2008-2013, the cap hits for linebackers were bouncing around. Sometimes they would top $20m when other times they’d be closer to $10m. In the last four years or so, however, the number has really steadied. Just one champion of the last four has had a cap hit for their linebackers that were less than $20m (the Eagles at $14m). The league seems to be trending towards higher paid LBs that can help solidify a Super Bowl caliber team and if that isn’t possible, it’s being substituted for a strong defensive line. Just one champion in the last ten had a cap hit for their defensive line and linebackers inside of the top fifteen at the same time. In fact, most teams have quite a spread in that they didn’t pay both a lot at the same time and instead chose to splurge on one of the position groups in particular. 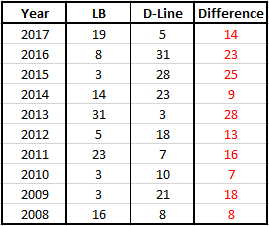 Comparing these two position groups, it shows the disparity in what teams pay them. This is one of the only one or the other choices in positional spending I’ve seen so far in that you either can pay your defensive line or your linebackers and that could give you a good shot at an overall championship caliber defense. There are multiple years with more than a twenty-spot cap hit rank separating the two groups. This really leads me to believe that you don’t have to splurge as a GM for top free agents in each position and that focusing your attention to one could be very beneficial for you in the long run.