When I started, I believed that the secondary would be the highest paid part of the defense by championship teams by far. It seems to me like the wide receivers of the defense and that they often receive luxurious contracts when free agency hits. Much like linebackers, two of the top five contracts signed this season were by cornerbacks. More impressively though, six of the top ten were cornerbacks making a strong secondary a necessity now in the league and in the past as well.

Contrary to this offseason, however, the secondary on a team has been “secondary” on SB team payrolls in the past ten years. With an average cap hit of just sixteenth that puts it at third lowest of all positions ahead of just special teams and quarterbacks. Although in those ten years, three teams won with a secondary with a cap hit inside of the top ten, it hasn’t happened in four years. In fact, it’s become less and less commonplace to see, in 2014 New England had the tenth highest paid secondary, but in 2015 it was twelfth, then twenty-eighth and finally last season, the Eagles had the twenty-third highest cap hit for a secondary.

On an individual level, the secondary group is very similar to the defensive line in which one position is often paid quite a bit and the other is left out to dry. With the biggest difference between inside of one group, the individually highest paid cornerback on a Super Bowl Champion team is all the way down in thirty-fourth. Compared to the safety, it seems almost forgotten as the individual highest cap hit for safety was tenth. That makes safety the highest individual average on the defense by seven spots (Punter at seventeenth) and the highest on either side of the ball by two spots (Tackle). 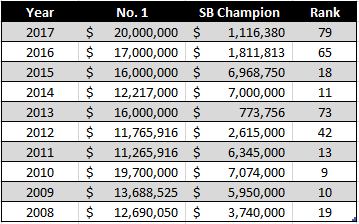 Looking at the chart of the highest cap hit for a cornerback per year versus what the Lombardi winner paid, it’s almost laughable. None of the last ten SB winners have had an individual cornerback with a cap hit of higher than $10m and the highest cap hit in the league has never been less than $10m. That’s not to say definitively that paying a cornerback that kind of money takes away your chances at a Super Bowl. But it’s fair to say it’s unnecessary to splurge and feel like you must outbid the other teams to get “must have” corner. There’s an average difference in these cap hits of around $6m, the second biggest to defensive ends.

Looking at safeties on these same teams however it’s a completely different story. The SB safeties had an average cap hit of around $6.7m for their given year making it second based on average behind only linebackers. Even with the higher cap hit though, the average difference in money spent between the highest paid safety and the SB safety was just $3.3m. 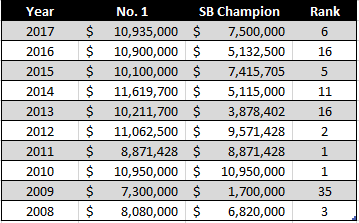 Of all the positions and contracts reviewed, this was the most surprising to me. Not only were six of the ten safeties on the past ten SB teams inside of the top ten cap hits for safeties that year, but just one was outside of the top twenty which really skews the average although it’s still at ten. Although it seems that the rank for the champion’s safety is trending down the last few years it cannot be understated the correlation of safety cap hit ranks along with the success of a team. This position was by far the most consistent across ten years than any other position. Along with these numbers. For the bottom ten teams each season for the last ten years, they have never had an average cap hit for their secondary above fifteenth. Not a single time. This tells me that if I’m spending money as a GM in the offseason, it’s pertinent that I build a strong secondary and shell out some money for it, but don’t splurge too much on any one player.