The Branding Effect: Do the Teams with the Best Logos Drive the Highest Merchandise Sales?

Published on November 11, 2019 by Caroline Darnell   Share this on:

Most fans will support their team no matter the team color, mascot, or font choice. It is safe to say in our current society, however, that brand image and recognition is a major determining factor to the success of many businesses. Is the full extent of the sports branded merchandise industry fans buying from their favorite team, or is there more to it? This article will analyze whether the teams that are credited with having the best logos also have the highest merchandise sales and overall value.

While this is purely opinion based and many fans are biased to their favorite team, several studies have analyzed and rated the best logos in sports. These have been selected based on familiarity, creativity, incorporating team history, as well as other factors. The Bleacher Report compiled a list of the Top 50 Best Logos in Sports. A condensed list of the #Top10 are as follows:

While the content/order of this list may vary depending on the source, many studies are very similar upon comparison, especially considering the top 3. These logos have proven to be the most recognizable among consumers, and fans feel that it accurately conveys the brand message that the team is trying to portray.

Listed below is a graph ranking the most valuable sports teams worldwide in 2019. These are the teams with the highest profits in 2019, which a very high percentage of these profits is directly correlated to that team’s merchandise sales. 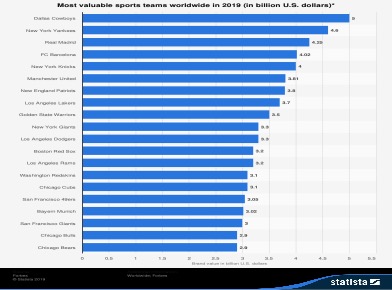 The Dallas Cowboys claimed the #1 spot with $5 billion in total profits in 2019. This was followed by the New York Yankees at $4.6 billion, and Real Madrid with $4.25 billion.

Of course, it is not plausible to claim that having a well-branded logo is the highest contributing factor to a team’s merchandise sales. There are many factors involved, the primary contributor being fan loyalty/support. In defense of strong branding being a contributing factor, however, it is not uncommon to see New York Yankees or Dallas Cowboys merchandise hundreds of miles from their respective cities. This is not as common in teams with lesser known logos. This is an interesting concept given that the New York Yankees have not won the World Series since 2009, and the Dallas Cowboys have not won the Super Bowl since 1996.

Sports Merchandise is a unique market not quite like any other. In few other markets will you find consumers so passionate about the message behind the clothing items they’re purchasing. Whether it is selling a shirt to the die-hard fan at the stadium on #gameday, or a hat to the casual shopper simply attracted the logo at a trendy shop in the mall, branded merchandise is a crucial aspect in the world of sports today.

Caroline Darnell is a senior marketing major at Samford University. She is from Summertown, Tennessee and is planning to purse a marketing career following graduation in December, 2019. Her LinkedIn profile is linked below.