The Progression of Giannis Antetokounmpo

In just six short NBA seasons, Giannis Antetokounmpo has risen to the top of the basketball world.  From being selected 15th overall in the 2013 NBA Draft by the Milwaukee Bucks to becoming the 2019 league MVP, the Greek Freak has consistently improved his game each and every year as a pro.  The purpose of this article is to statistically observe how Giannis has progressed over his career in each category.

The graph below displays Giannis’s points per game by season for his career. 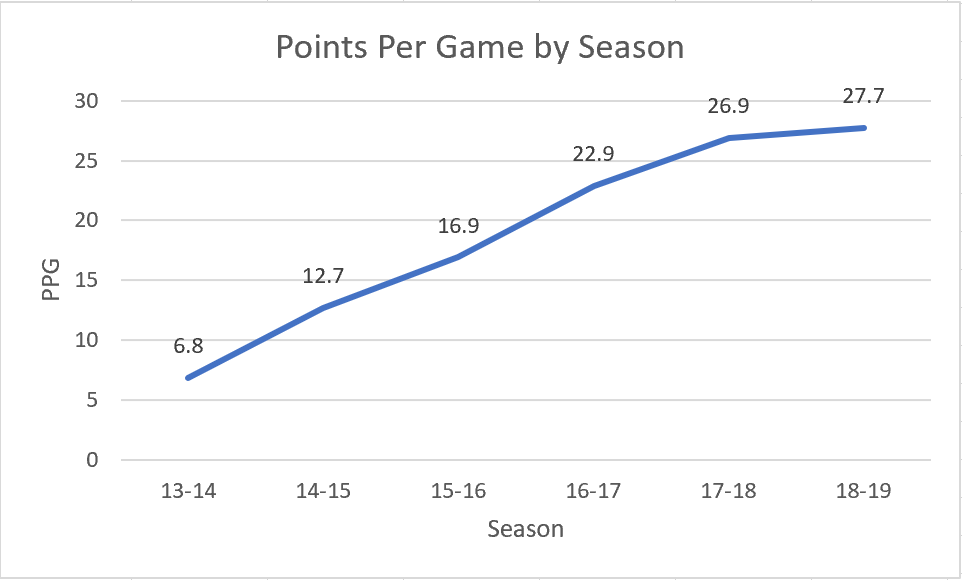 As we can see from the graph above, Giannis has increased his scoring every season of his career.  From averaging just 6.8 points per game as a rookie, Antetokounmpo’s scoring average has rapidly risen to 27.7 points a game in 2019.  This number is a career best average for Giannis.  It is also a team high and ranks as the third highest scoring average in the NBA this past season.

The graph below displays Giannis’s rebounds per game by season for his career. 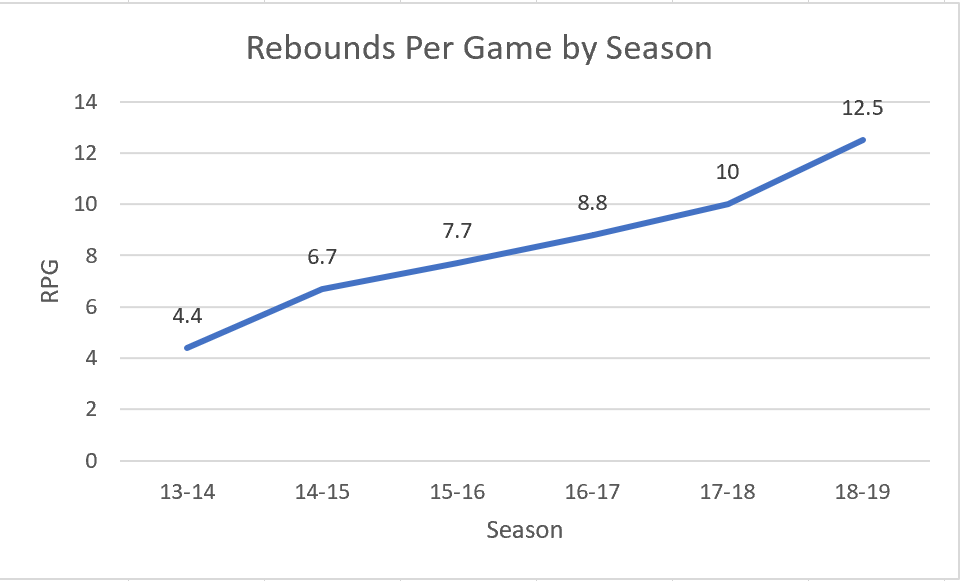 Much like scoring, Giannis’s rebounding numbers have increased every single season of his career also.  The Greek Freak only grabbed 4.4 boards per game as a rookie; however, that number has shot up to 12.5 rebounds a contest this year.  This 12.5 rebound average led the team this past season, and ranked sixth best in the league.

The graph below displays Giannis’s assists per game by season for his career. 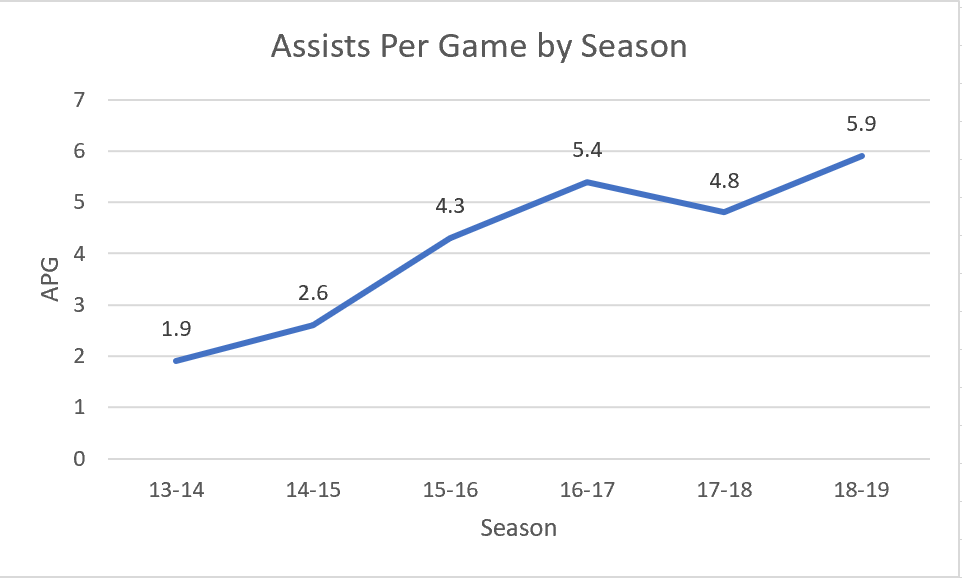 Giannis’s most improved aspect of his game is arguably his passing ability.  As he has become a more dominant driving force in the paint, more teams have begun to double team and trap Giannis as he makes his move to the rim.  Improving on these passing abilities has made Giannis much harder to guard, and his teammates around him much better.  Antetokounmpo has gone from averaging 1.9 assists per game as a rookie to dishing out 5.9 a contest in 2019.  This assist average was a team best on the season, and ranked 21st in the NBA.

The graph below displays Giannis’s field goal percentage by season for his career. 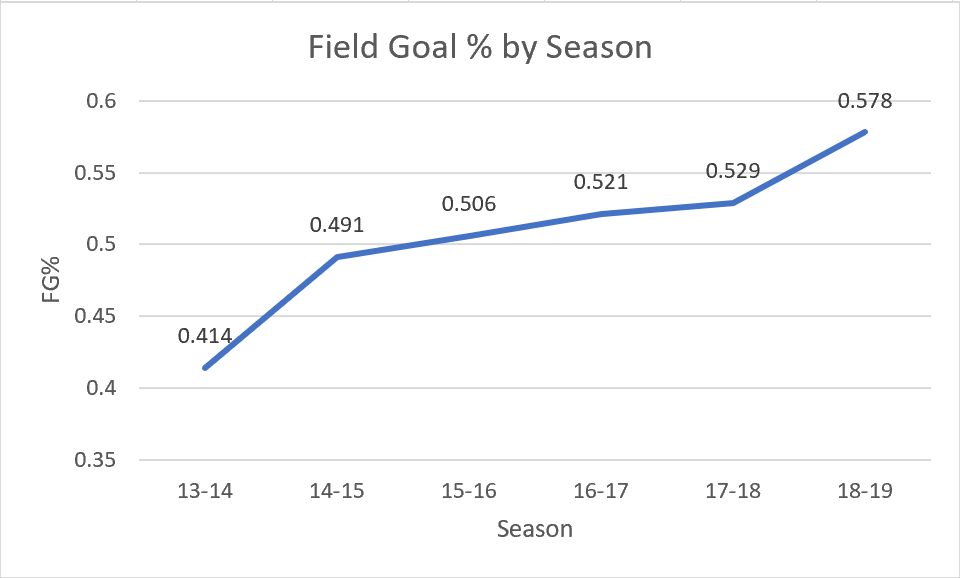 Yet again, the Greek Freak has improved on his shooting percentage every year in the league as well.  His field goal percentage has steadily increased over time, shooting at a clip of 41.4% as a rookie and growing to 57.8% in 2019.  This 57.8% shooting rate was the best on Milwaukee’s team, and ranked 11th best in the league this season.

The graph below displays Giannis’s player impact estimate (PIE) by season for his career.  According to stats.nba.com, “PIE measures a player's overall statistical contribution against the total statistics in games they play in.  PIE yields results which are comparable to other advanced statistics (e.g. PER) using a simple formula.” 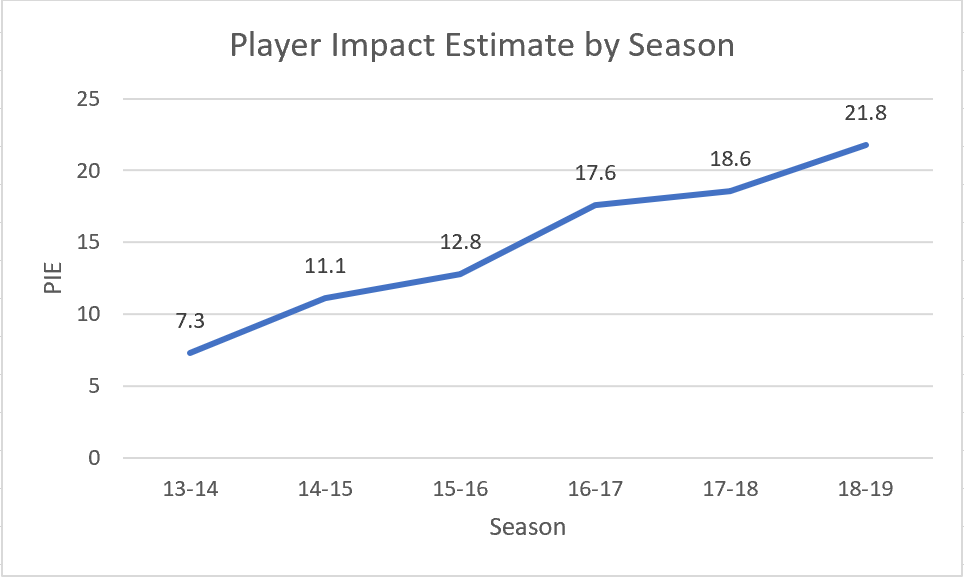 Sticking with the trend, Antetokounmpo’s PIE rating has steadily increased over the years as well.  Being that this is a player efficiency rating, this statistic is literally telling us that Giannis has become a more efficient and valuable player every season of his career thus far.  His 21.8 PIE rating this past season was not only a team best, but an NBA best.

The graph below displays Giannis’s plus-minus rating by season for his career.  According to stats.nba.com, plus-minus is, “the point differential when a player or team is on the floor.”  This number represents how much better the Bucks were than their opponent when Giannis was on the floor. 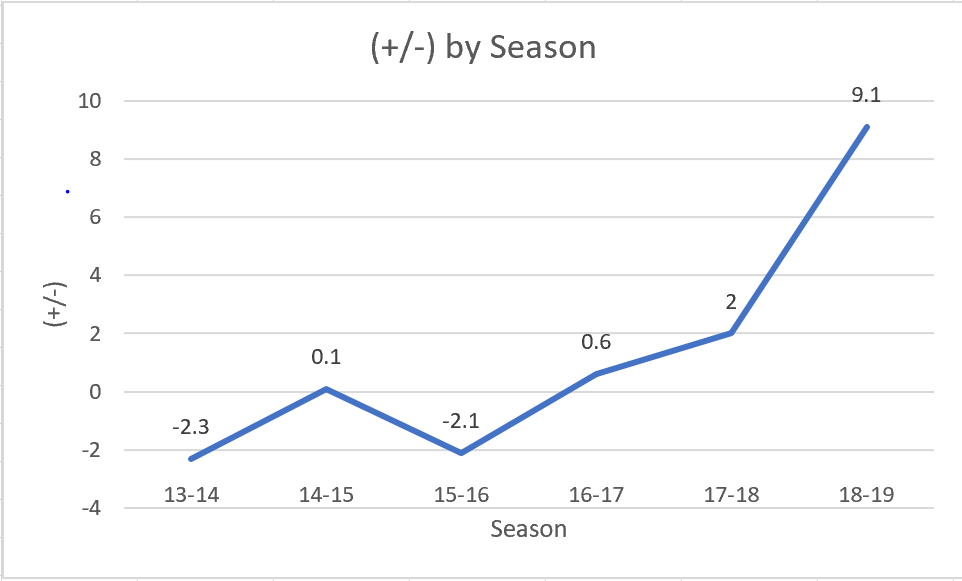 Giannis’s plus-minus ratings weren’t the strongest his first four seasons, as two of them were negative and two were just above 0.  However, this number has been on the rise the past three seasons and is now the highest of Giannis’s career at 9.1.  This number not only leads his Bucks team, but is the second highest amongst all NBA players this year, trailing only Steph Curry.

The graph below displays the Milwaukee Bucks’ team wins by season for Giannis’s career. 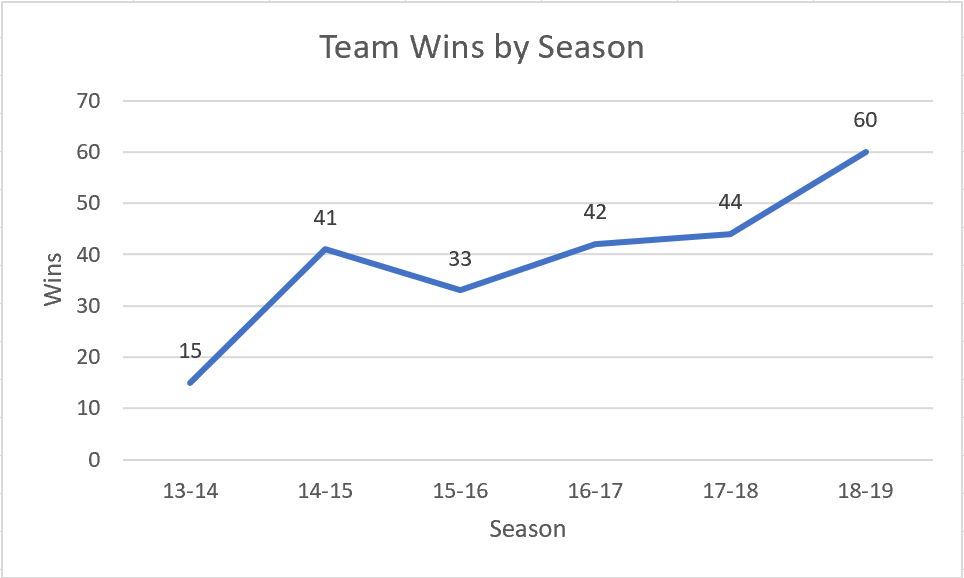 I chose team wins for the final category because I think it is important to acknowledge the progression of the Milwaukee Bucks as a team since Giannis has been there.  The Bucks have found more success as a team almost every year since Giannis joined the franchise.  Their record has improved for the past three seasons and was an NBA-best 60-22 this year.  The Bucks have gone from being the worst team in the league Giannis’s rookie season to the best team in the league in 2019.

As we can see from the graphs above, Giannis has improved in nearly every category every season of his young career.  At this rate, he will be dominating the NBA for many years to come.  To end the article, here is a list of the Greek Freak’s early career accomplishments.

Connor just completed his sophomore year at Purdue University, where he is pursuing a double major in actuarial sciences and applied statistics, with a minor in management.  He has had a passion for both sports and statistics since a very young age, and enjoys discovering all the new information statistics can give us about sports.  LinkedIn