What Does It Take to Win at a Superspeedway?

The many different NASCAR tracks can be categorized into four major groups: short tracks, road courses, intermediate tracks, and superspeedways. Superspeedways, in particular, host the most exhilarating races because their long distances (a superspeedway is greater than 2 miles in length), oval shapes, and steep banking allow drivers to reach exceptionally fast speeds, even by NASCAR’s standards. For this reason, racing at a superspeedway differs vastly from racing at any other type of track.

Drivers hoping to succeed in a superspeedway race should have excellent car control and the ability to remain calm under intense pressure. They must also be willing to take risks and can’t be fazed by wrecks, which are almost inevitable. Therefore, I assumed that only the best, most experienced drivers won races at superspeedways. But Justin Haley, a 20-year-old in his first Cup series season, recently won the Coke Zero Sugar 400, and this got me thinking that maybe the challenges posed by superspeedways essentially level the playing field and make it so that drivers of all skill and experience levels are capable of winning races held on such tracks. In order to determine whether or not this theory holds water, let’s take a closer look at the results of superspeedway races in the Monster Energy NASCAR Cup Series, which is NASCAR’s premier racing series.

Daytona International Speedway, Indianapolis Motor Speedway, Pocono Raceway, and Talladega Superspeedway are the 4 tracks that are classified as superspeedways, and 7 Cup series races take place at these tracks each year. The table below shows how many superspeedway race winners from the last decade were ranked in the top 5, between 6th and 10th, between 11th and 20th, and 21st or lower.

We see that a similar percentage of superspeedway races were won by drivers ranked 1st-5th, 6th-10th, and 11th-20th, so an individual doesn’t necessarily have to be one of the best drivers in NASCAR in order to win at a superspeedway. That being said, the fact that roughly 93% of the winners were ranked in the top 20 suggests that drivers who perform consistently well throughout the Cup series are more likely to emerge victorious in a superspeedway race. 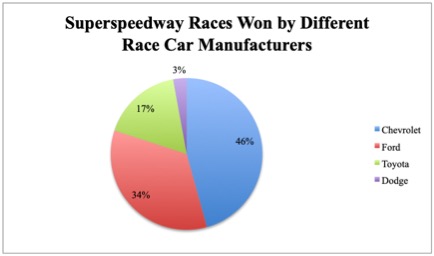 Using this information, we can conclude that a consistently high-performing driver racing in a Chevrolet has the best odds of winning at a superspeedway.