The game of baseball is comprised of pitching, batting, and fielding, and you would think that the best teams in Major League Baseball are the ones that excel in all three components. However, such teams are surprisingly rare, and it’s often the case that World Series champions dominate only one aspect of the sport. For example, the 2009 New York Yankees won their rings primarily through a stellar offense, while the 2005 Chicago White Sox relied heavily on their pitchers’ arms. This raises the question: which facet of baseball do most World Series champions distinguish themselves in and, therefore, is most indicative of who will win in the postseason?

The pitcher is widely regarded as the most influential defensive player because his performance directly impacts the number of runs scored by the opposition. For this reason, many people assume that the top MLB teams have the most effective pitchers. The given table provides insight into former World Series champions’ pitching performances by listing their earned run averages (ERA) and bases on balls/walks per 9 innings pitched (BB9), which are two commonly accepted statistical tools for evaluating pitchers. 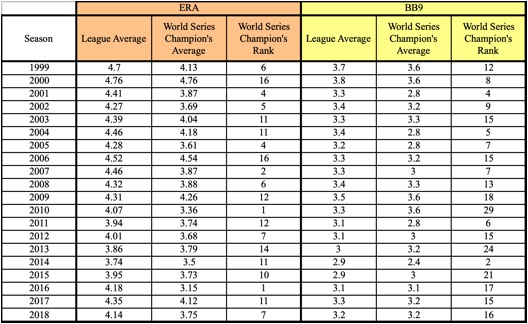 Notice that 19 out of the last 20 World Series champions had ERAs that were less than or equal to the league’s average ERA, and the mean difference between the champion’s ERA and the league’s average ERA was -0.37. Furthermore, 6 of the champions were ranked in the top 5 in Major League Baseball for ERA, and 11 of them were ranked in the top 10 (the lower the ERA, the higher the rank). This means that the champions’ pitchers allowed fewer earned runs than most of the other MLB teams’ pitchers. Now, if we shift our attention to the BB9 statistics, which are used to help calculate ERA, we see that a large majority of the champions’ pitchers walked fewer batters than the “typical” pitcher in the league, but only by a margin of about 0.14. Therefore, it is safe to say that World Series pitchers have significantly lower ERAs than many other teams’ pitchers, but it’s not because they give up considerably fewer walks.

Obviously, a team cannot win games without scoring runs, so a batter’s main goal is to get on base, whether it is through a hit or some other means, like an error, walk, or hit by pitch. The table below shows how well former World Series champions achieved this goal by comparing their batting averages (BA) and on-base percentages (OBP) with the league’s average batting average and on-base percentage each season. 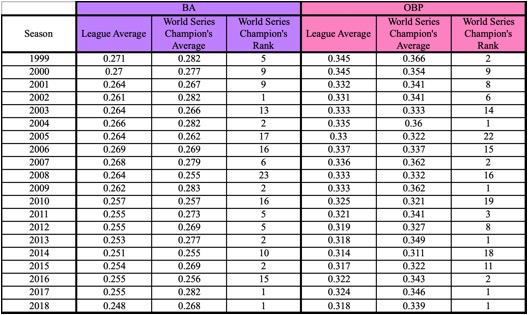 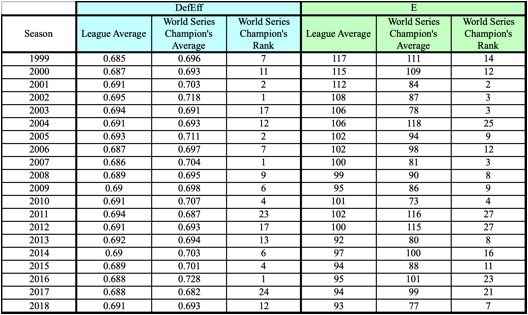 Defensive efficiency (DefEff) is an estimate of the percentage of balls in play converted into outs, and the table shows that 17 out of the last 20 World Series champions had DefEff stats greater than or equal to the league’s average DefEff. Furthermore, 7 of the champions were ranked in the top 5 in Major League Baseball for DefEff, and 12 were ranked in the top 10, so we can say that champions get runners out at a relatively fast rate. They also make fewer potentially costly mistakes, for they have, on average, about 7 fewer errors (E) than the “typical” team in the league. This goes to show that fielding, while often overlooked, plays a key role in winning games and should be given more credit.

World Series champions normally have better than average performances in all three facets of baseball, but they seem to truly set themselves apart through their pitching or batting. In any given season, we could expect to find a World Series champion with an exceptional ERA or extraordinarily high ranks for BA and OBP. Therefore, I think it’s fair to say that the age-old saying “pitching wins World Series” is incorrect and that batting is just as strong of a predictor of who will win the World Series as pitching is, at least in recent decades.