A Look at the 2020 NBA MVP Candidates

Published on September 7, 2020 by Gustavo Garcia-Franceschini   Share this on:

The NBA recently announced that the “seeding games” at the Orlando bubble will not be considered for the annual regular season awards. That means that the MVP race is already over and now it is time to try to predict the winner. Milwaukee forward Giannis Antetokounmpo is certainly in the conversation, as the Bucks sit at the top of the league. LeBron James is also being heavily considered. After a disappointing 2018-19 campaign, James found himself with a better supporting cast and led the Lakers to first seed in the tough Western Conference at 35 years old. Also in the Western Conference, second-year sensation Luka Dončić has led the Mavericks to seventh seed after three years of missing the playoffs.

How do their averages compare?

While looking at the traditional box score averages has been discouraged because it does not provide context, it is also true that they are the most accessible and understood statistics. Figure 1 makes it easy to compare averages between our three MVP candidates. 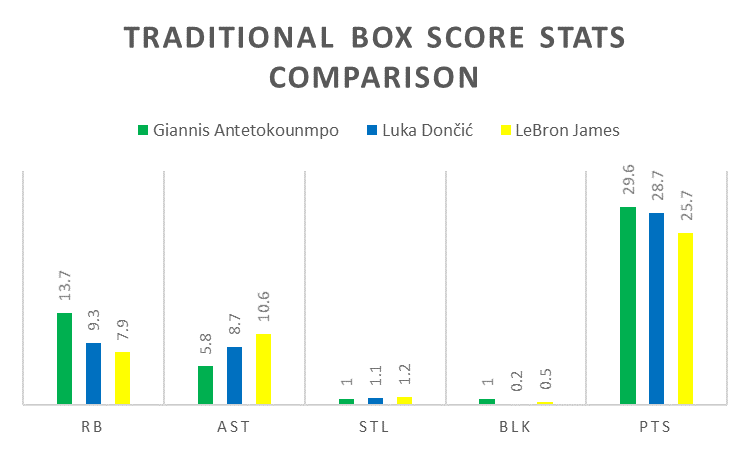 Figure 1: Comparison of the five most basic averages for Antetokounmpo, Dončić and James

We can see in Figure 1 how Giannis Antetokounmpo leads all of our candidates in rebounds per game, blocks per game and points per game. However, LeBron James holds a comfortable lead in assists per game and a very small advantage in steals per game. Luka Dončić is the balanced candidate here, holding the second position in all averages except blocks per game, which is to be expected when comparing a guard to forwards.

Next, we will take a look at Figure 2, which compares the shooting percentages from the three players. 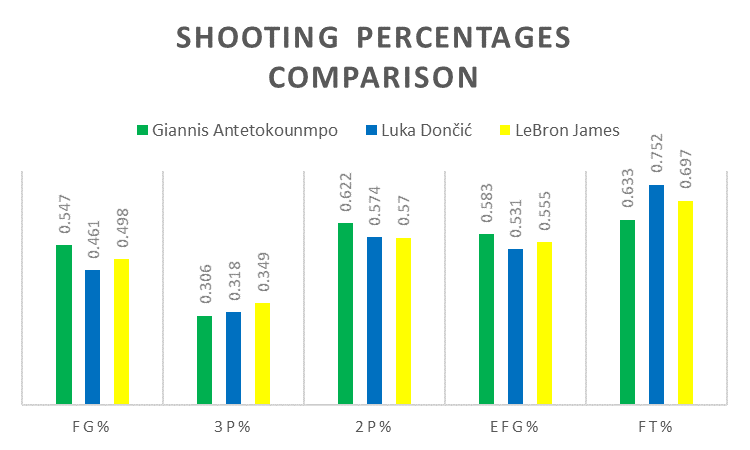 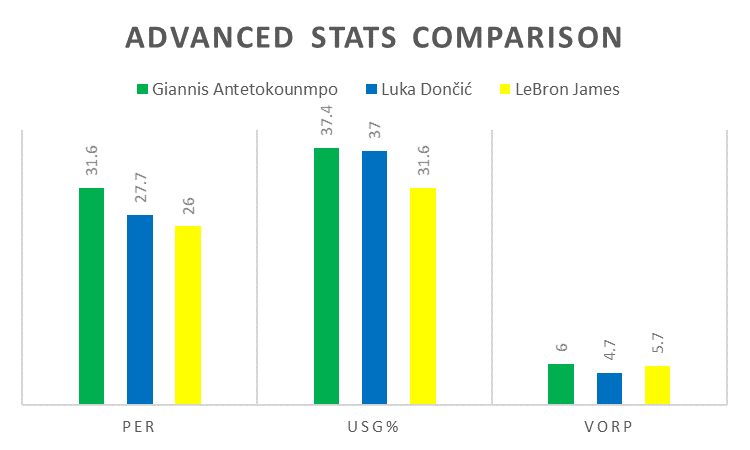 Surprisingly, Figure 3 shows Antetokounmpo leading in all categories observed. He has the highest Player Efficiency Rating (measure of per-minute production) and Usage Percentage (estimate of percentage of plays used by the player while on the floor), which is very impressive. Additionally, he has the highest Value over Replacement Player. Although James has the second highest VORP, it is actually Dončić who has the second highest Player Efficiency Rating and Usage Percentage.

Next, we will take a look at the Win Shares (wins contributed by a player) as shown in Figure 4. 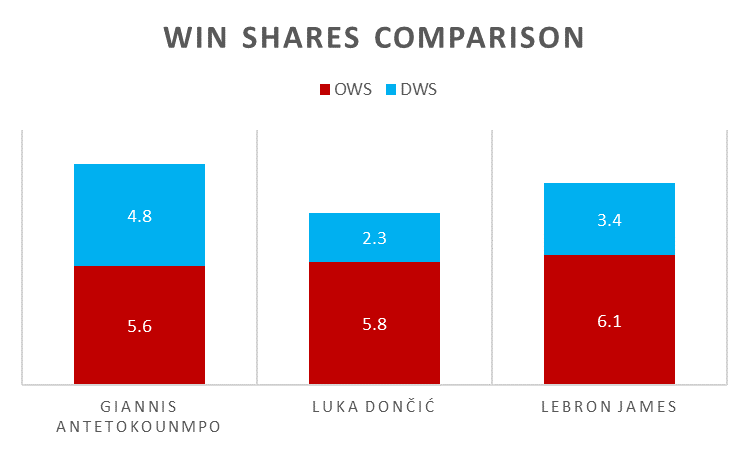 How do their teams compare?

Basketball is a team game, and no comparison is complete without taking a quick look at how each team is doing. Figure 5 shows the Offensive Rating and Defensive Rating for the Milwaukee Bucks, Dallas Mavericks and Los Angeles Lakers. 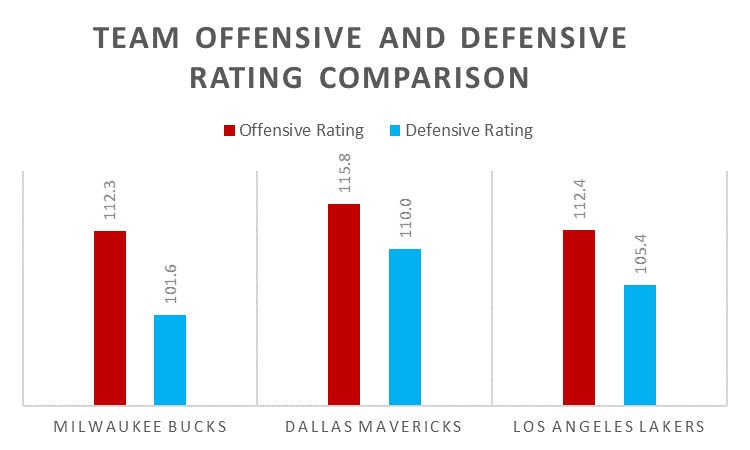 Figure 5: Offensive and Defensive Rating comparisons for the Bucks, Mavericks and Lakers.

My pick for MVP is Giannis Antetokounmpo. He leads the group in points and rebounds while being very efficient, with the best effective field goal percentage, best PER and highest Win Shares. However, LeBron James is very likely to receive votes, since he averages the most assists out of the three while being the most balanced shooter and second in Win Shares. Luka Dončić is a step behind the first two since he does not have any eye-catching averages in traditional statistics and his team is behind the Bucks and Lakers in Net Rating. It would be no surprise if he ends up winning the MVP award in a few years though, since he has led Mavericks to the best Offensive Rating in the NBA by posting a 53.1% Effective Field Goal Percentage and a 37% Usage Percentage in his second year in the league.