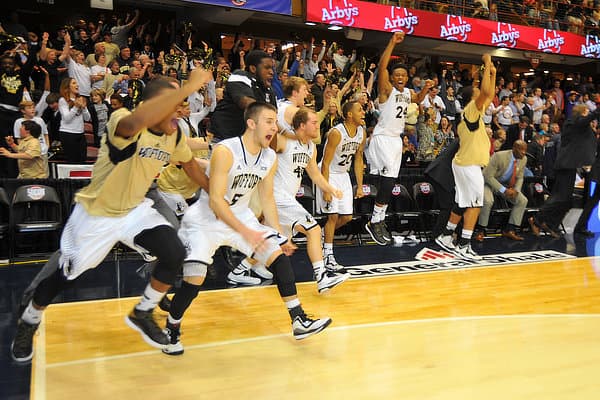 Recently, I conducted a study to attempt to quantify the significance of home court advantage in college basketball. I collected data on the results of all in-conference games from the last seven years in the Power 5 conferences, and every conference’s record and win percentages for home and away games.

As the table depicts, the impact of home court advantage in the power 5 is enormous. Home teams have won at least 60% of the conference games in the last 7 years in every single power 5 conference. In the Pac-12 and the Big 12, teams at home have won games nearly twice as often as teams on the road, showing the massive benefit teams get from playing at home.

Cameron Indoor Stadium, Assembly Hall, Carrier Dome. Just the names are enough to give some avid fans chills. These household names are considered some of the toughest places to play for any road team in college basketball. Dozens of schools claim to have daunting arenas, but which has been the most difficult for opposing teams over the last several years? 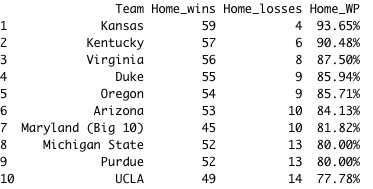 The blue bloods reign supreme, as Kansas, Kentucky, Duke, and UCLA all rank in the top ten in performance at home over the last seven years. What teams have been the worst at defending their home court? 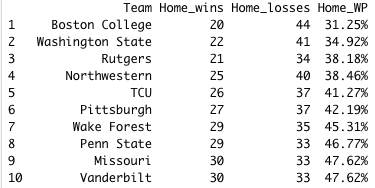 This list is filled with schools not known for their basketball. It is worth noting that if not for Rutgers’s magical 2019-20 season, in which they went 9-1 at home, they would be dead last in this ranking by a large margin. Another interesting finding is that these ten teams are the only power 5 teams that have a home winning percentage below 50%, meaning a whopping 56 teams have winning records at home, showing the dominance of home teams. What teams are best and worst on the road? 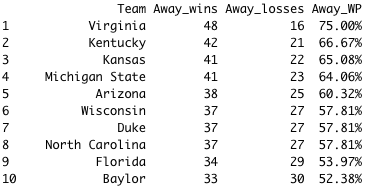 At first, Virginia’s 75% road win percentage doesn’t appear to be so impressive, as around a dozen teams surpassed that percentage at home. However, team success away from home decreases rapidly down the table. In fact, by team number 14, we are already below 50%. Virginia’s ability to win three-quarters of their road games in the last 7 years in ACC play is simply remarkable. On the other hand, a large portion of the power 5 teams mightily struggle on the road. Rutgers went 0-9 on the road in 3 of their last 6 seasons, and they have some company with them in the single digit home wins, once again showing how difficult it is to win games on the road in the power 5.

In addition to the power 5, I also analyzed data from the Southern Conference (SoCon), a mid-major league filled with teams based in the Southeast.

While home court advantage is certainly present in the SoCon, it does not have nearly as much of an impact than it does in the power 5 conferences. There are several factors that contribute to this anomaly.

First, all of the teams in the SoCon are packed into a few southeastern states, The furthest distance between any two schools is just over 600 miles. On the other hand, teams in power 5 conferences cover a larger geographic area. For example, the ACC and Pac-12 stretch all the way down the east and west coast respectively. In the ACC, the distance between Boston College and Miami is around 1,500 miles, 2.5 times the distance between VMI and Samford. With less travel, teams will naturally be less tired and uncomfortable, and they will be able to play on a higher level on the road.

Second, mid-major teams like those in the SoCon don’t draw as many fans, creating a much less intimidating atmosphere. The arenas at home games for top-tier programs like Arizona and Michigan State are filled with tens of thousands of screaming fans, creating a very different and much more hostile environment than SoCon arenas. Of course, there are more factors that play a role in the difference in the impact of home court advantage, but travel and fans are probably the two most notable ones.

Every year, the NCAA selection committee gathers to choose which teams will make the NCAA tournament and which will fall to the NIT. The group uses numerous advanced metrics to evaluate and compare teams in order to determine which teams earned a coveted spot in the Big Dance. The reason that it is so important to understand home court advantage is without a proper grasp of its impact, we will not be able to create accurate ratings for teams for the selection committee to look over. Flawed statistics will lead to worse teams getting a shot at the national title at the expense of better underappreciated teams. In order to have a fair NCAA tournament, home court advantage must be accounted for properly, so I urge the selection committee to take a closer look at articles like this that examine the impact of home court advantage.

Here’s a link to my code: https://github.com/jakefed1/NCAAB-home-court-advantage/blob/master/Homefield_advantage_best_teams.R

Jake Federman is an intern for the Samford University Center for Sports Analytics and a rising high school senior at the Horace Mann School in Bronx, NY. Outside of sports analytics, Jake plays soccer and tennis, and is on his school’s math team.