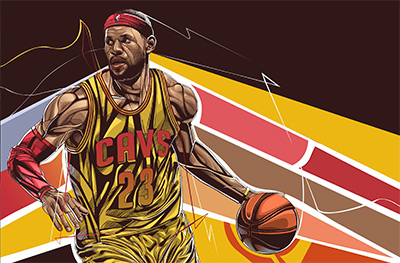 There has been a long history of professional athletes – particularly NBA players – advertising products to make additional cash outside of their league salaries. Besides actual playing ability, building and maintaining a brand presence has been vital in athletes’ ability to land big-name, lucrative endorsements.

With the increased global popularity of basketball and newfound media and technological platforms for players to utilize, building and maintaining a strong, reputable brand is now more valuable and possible than ever before. NBA players today are able to build their own distinct brands, and do not need to rely on sponsorships from major companies, like Nike or Hanes, to do so – which was often the case in the past.

The more fan support and attention that an athlete can attract, maintain and maximize, the more teams, leagues, sponsors and other stakeholders value the athlete’s brand. Athletes, agents, marketing companies and others near them are carefully crafting social media presences to maximize revenue and financial prospects for players.

Players that are ultra-successful in building their brand, often regardless of how talented they are athletically, are able to land marketing deals, profitable sponsorships and have the ability to branch out in the business world and become more than athletes both during and after their playing days.

How About Brand Presence and Playing Salaries?

There already exists literature and an understanding in the sports world that brand presence has a positive effect on players landing off-court sponsorship deals and endorsements; but there is hardly any research about how brand presence affects league-specific salaries and team’s valuation of players.

The NBA is an entertainment business, so in theory, teams should be able to utilize big-name players as marketing and advertising tools the same way that Adidas, Sprite or other companies do. Having players with strong brand presence and a big following could potentially boost ticket sales, viewership, merchandise revenue and develop the team’s own brand – which can make a given team more relevant and yield additional positive benefits such as free agent wanting to sign with their team.

But do NBA franchises really utilize this opportunity? Or do they focus more on just signing the best basketball players? This analysis examines the relationship between social media presences and on-court salaries for NBA players while controlling for performance, age, and other possible confounds.

On-court performance, salary and Twitter engagement data on a random sample of 100 NBA players from the 2016-17 season was obtained and cleaned into a cohesive dataset. 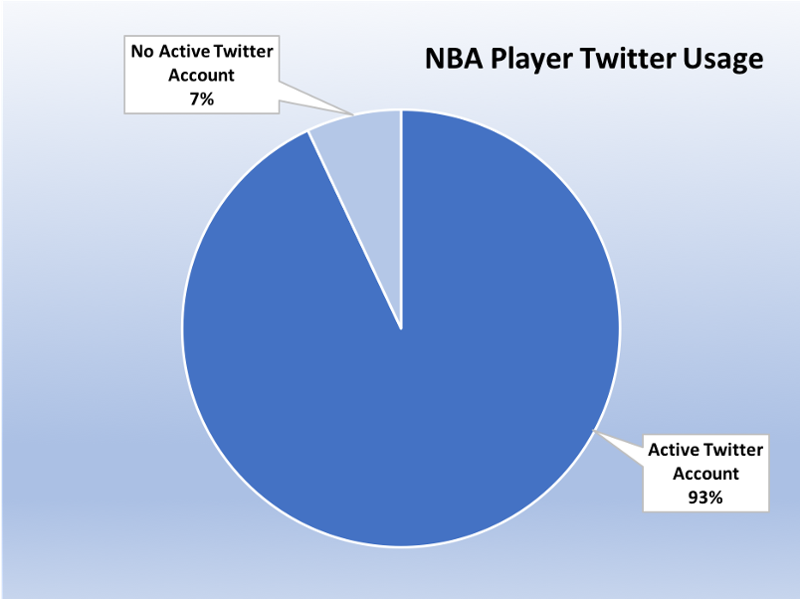 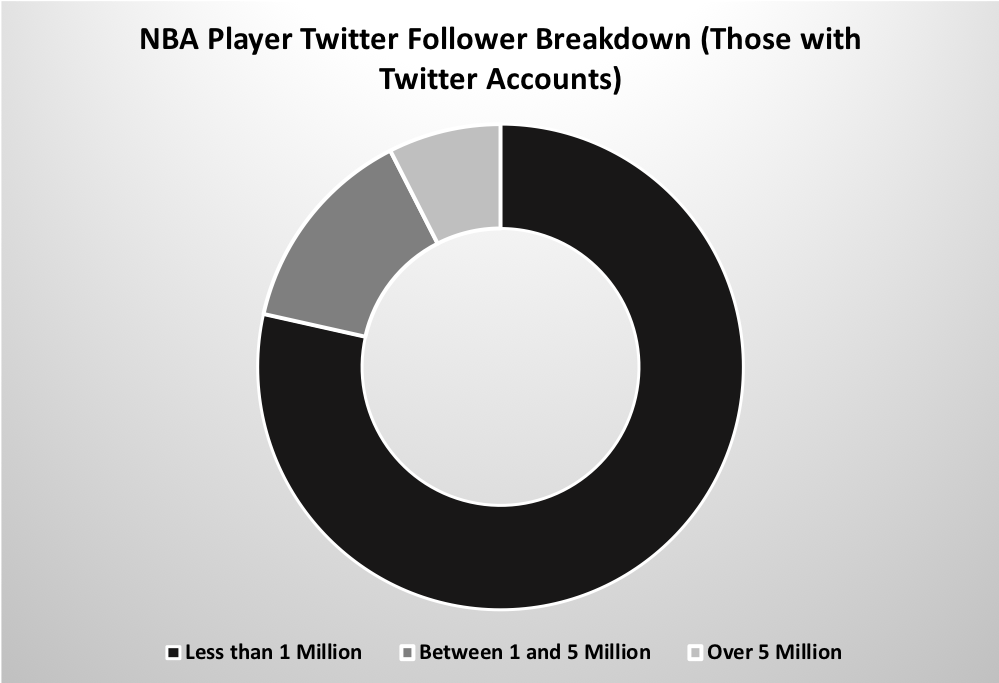 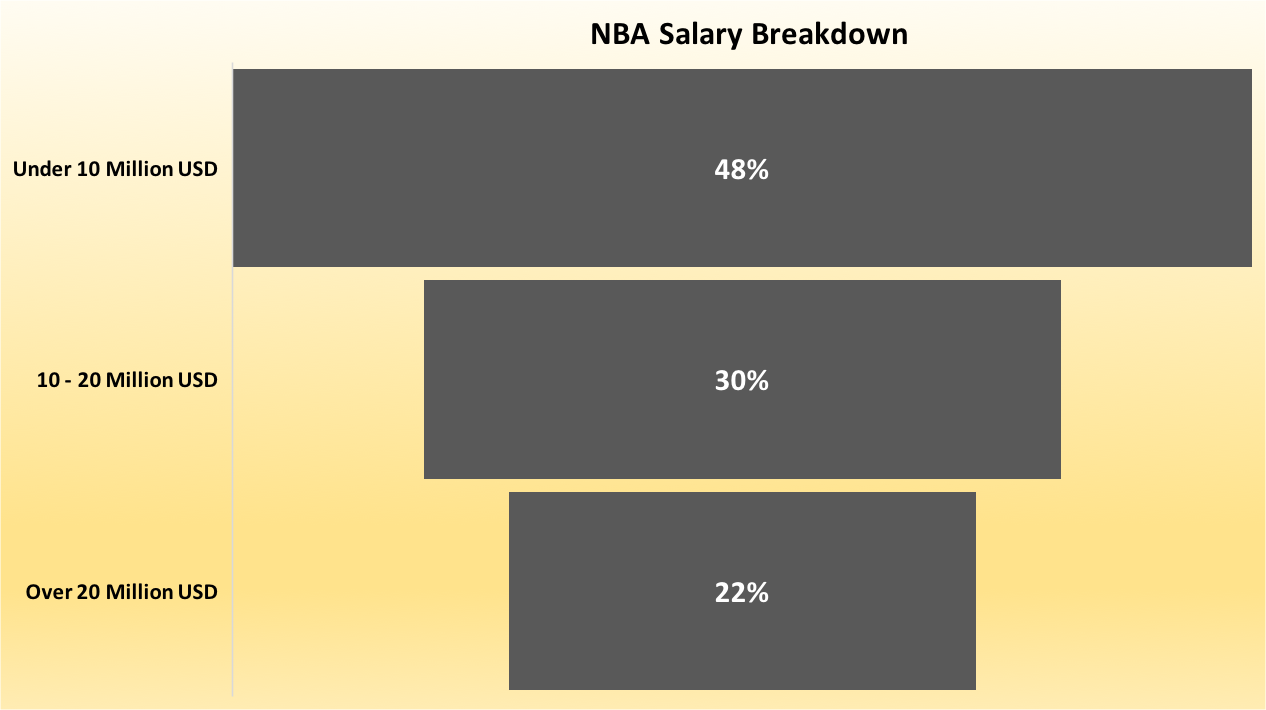 The regression analyses included a variety of fixed effects to control for possible confounds and isolate the impact of social media presence on team salary. The fixed effects incorporated into the model were team, age, games played, winning percentage, minutes per game, offensive rating and defensive rating. These variables were included to moderate any salary differences due to being on a certain team, age, as well as team and individual performance.

Minutes per game was the strongest predictor of NBA salaries out of the fixed effects (r = .67). There is significant variance, but nevertheless a clear positive relationship between minutes per game and salary. There also exists a clear ceiling effect because of salary caps and max contracts – this can be noted in the figure as salary levels off at $27-28 million. 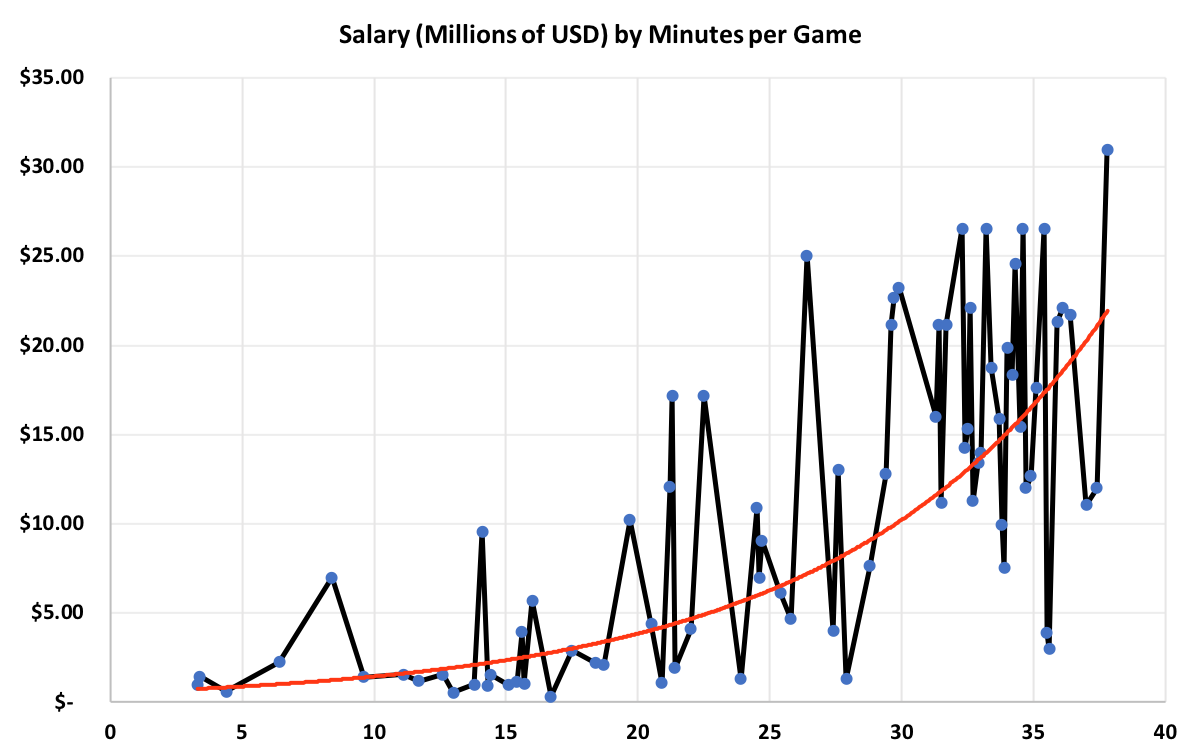 The analysis found that the amount of twitter followers a player has, while controlling for fixed effects, impacted a player’s salary at a marginally significant level (p value =.05). Players with 0-1 million followers tended to earn around 9 million in team salary, whereas this number skyrockets to 20, and 21 for players with 1-5 million and over 5 million followers, respectively. 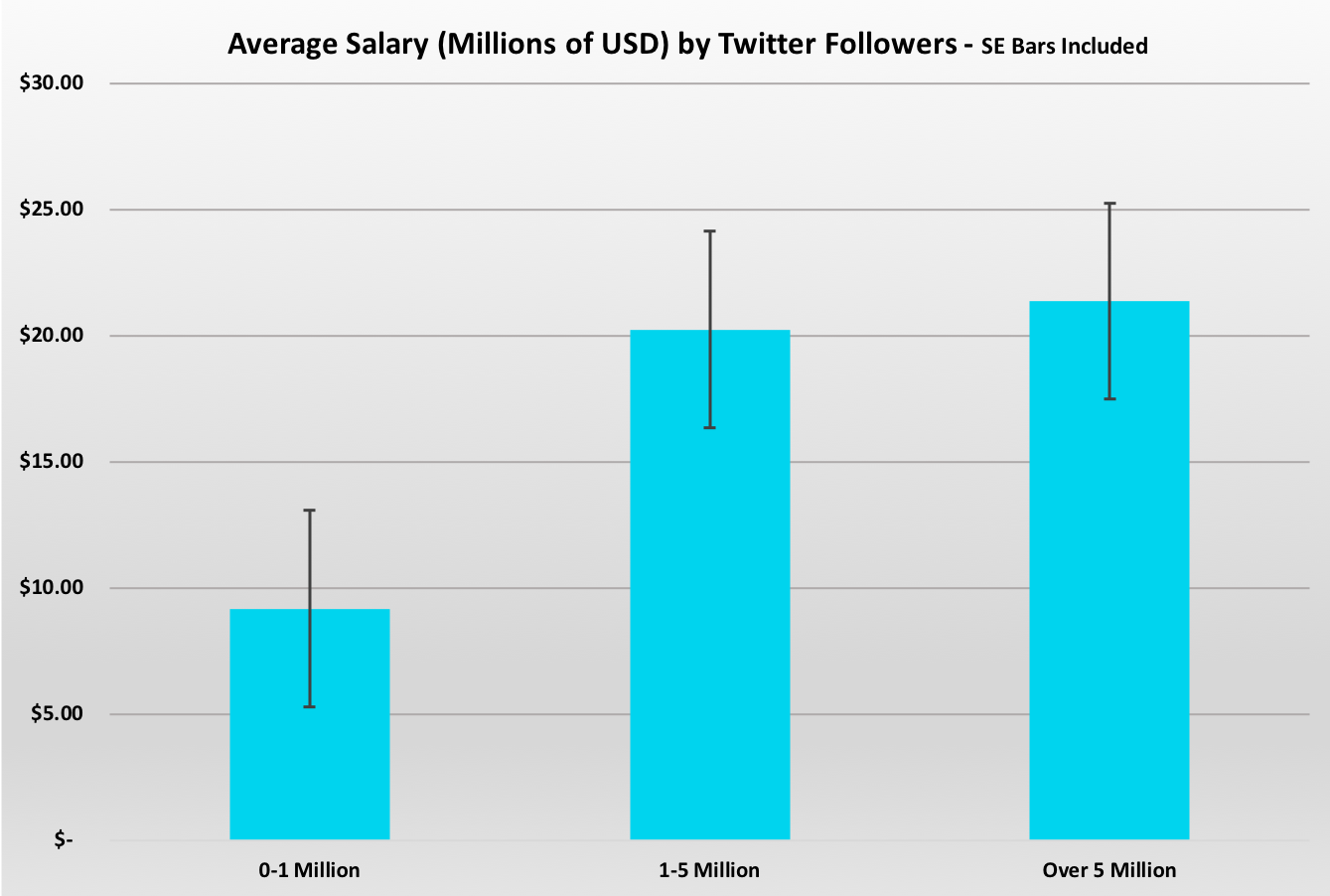 We suspect we did not find an effect for whether a player’s Twitter was active or not because of sample size (n = 100) and the fact that nearly all of the players from the sample were active on Twitter.

Taking fixed effects of team, age, player performance and team performance into account, for every additional 1 million twitter followers a player had, they tended to earn nearly $400,000 more.

This research is evidence that brand presence, particularly on social media, has a significant effect on the salary an NBA player earns from their team and how the franchise values players. This analysis suggests that NBA players who have more followers and more of a presence on social media tend to earn more money on their NBA contracts, regardless of age, performance, team and games played.

This suggests that NBA front offices and management understand that marketable and well-known players positively impact the organization beyond what they do on the court, as they incorporate this information into free agency, draft and trade decisions.

Thus, in order to fully maximize financial gain, players, agents, marketing companies and other key stakeholders should take steps to optimize a player’s social media presence and overall brand. In addition to landing more off-court deals, having a strong brand presence and following can also impact how team’s value them and the amount of money and opportunities they can get in the NBA.

This analysis is not without a handful of key limitations. First, this research uses social media solely to measure online brand presence, which is definitely a good indicator, but brand presence can manifest itself through other avenues. Further, this analysis only includes Twitter data, not other social media channels. There is likely a strong relationship between brand presence on different platforms, but this analysis would carry more weight if we had that data as well.

Further, the number of followers a players account has is used to measure a player’s social presence and it would be insightful if we had page views, post views or search data as well. Lastly, because the data is from 2016-17, the relationship between social media following and salary has possibly changed since then – also, it is likely that players currently are more invested in social media than they were in 3 years ago.

Zachary, one of our interns, will be finishing his junior year at Grinnell College (IA) this spring. He majors in Economics, concentrates in Statistics and is pursuing analytical careers in the sports industry – primarily in basketball and footwear.