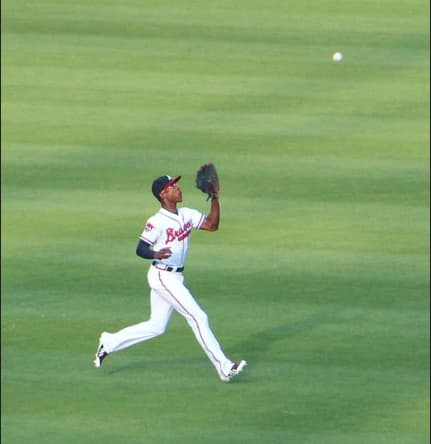 For athletes at the top of their sports, the pursuit of perfection never ends. Professional athletes devote countless hours to improving at their craft, even when the season is months away. While analytics can’t make a player perfect, they can certainly help players get closer to that elusive goal. By determining which skills actually translate to game success, analysts can help players optimize their training programs so they can improve where it actually matters.

Baseball outfielders are no exceptions, and there has never been a better time for them to incorporate statistics into their workout plans than now. Recently, outfielder jump data, which attempts to quantify how well outfielders track down fly balls, was added to Baseball Savant’s database. On the site, outfielder jump is measured by adding up feet saved against league average in 3 stages: reaction, the first 1.5 seconds after contact, burst, the next 1.5 seconds, and route efficiency over the first 3 seconds. It is only calculated on plays rated two stars or more, or plays with catch probability less than 90%. For more details, visit the website.

First, we need to determine which aspects of outfielder jump are actually trainable skills, as opposed to mere coincidences. To investigate this, we will examine the year to year correlations of each aspect of outfielder jump, as well as long term trends so we can understand how the relationships hold up over many years.

Burst average r (correlation coefficient)  = 0.701
Burst average R-squared (how much of the variance can be explained by the model) = 0.493 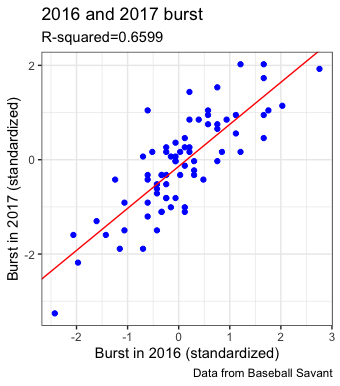 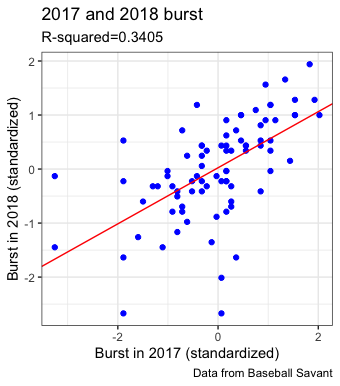 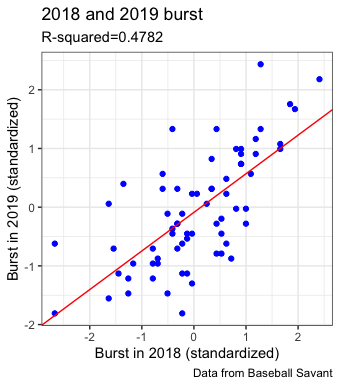 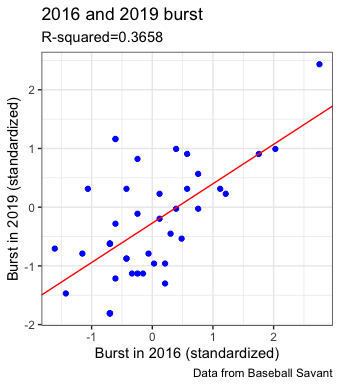 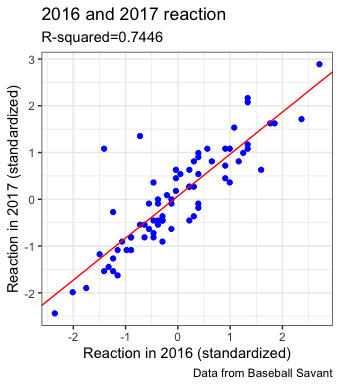 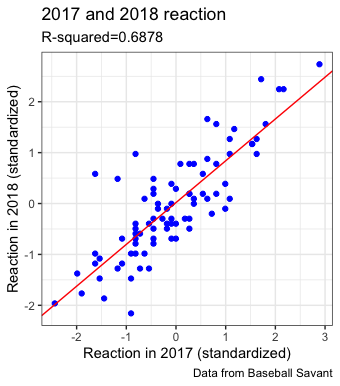 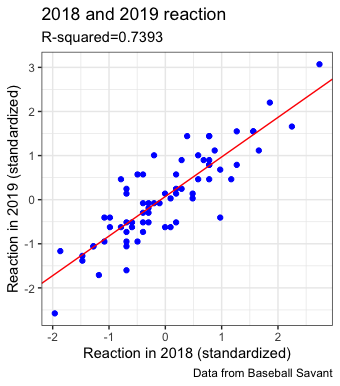 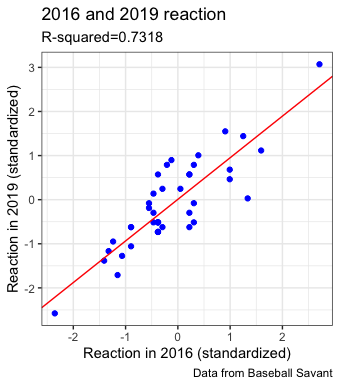 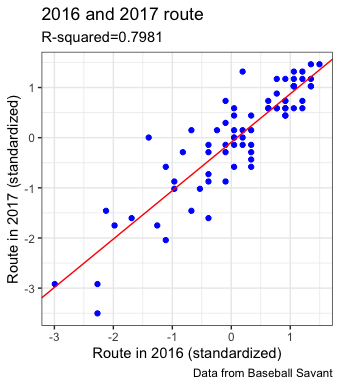 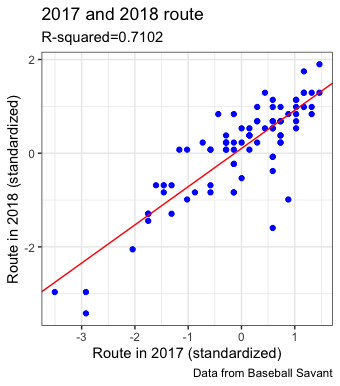 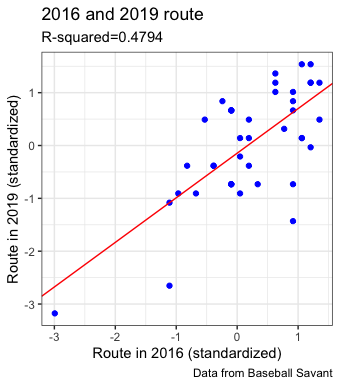 With the highest correlations and the highest R-squared values, reaction seems to have the most carry over year to year, and functions the most like a defined skill. This notion makes sense, as reaction (and reaction time) is believed to be an innate fixed trait, making it difficult to be changed. Meanwhile, route also appears to act like a skill on a year to year basis, but its high correlation isn’t maintained when looking at a longer period of time. While it is probably a skill,  it isn’t as obvious as reaction. However, burst seems to be the most unpredictable of the three. While the r and R-squared values are decent, they are low when compared to the other two phases of outfielder jump. One possible explanation is that as players age, their quickness and acceleration suffer. But even with that being said, burst still has a high enough correlation to be considered a trainable skill.

With all three aspects of outfielder jump determined to be trainable skills, it’s time to take a look at which ones actually correspond to performance. I used OAA to represent overall outfielder performance, but I also put it on a per-play basis and standardized it. 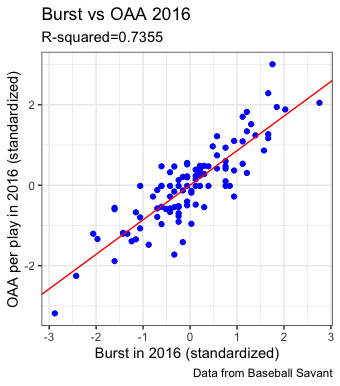 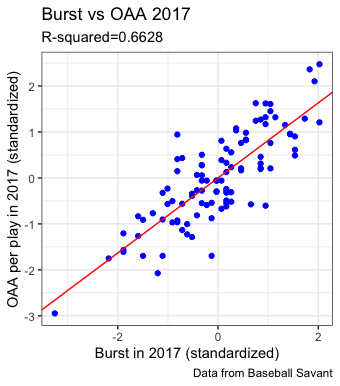 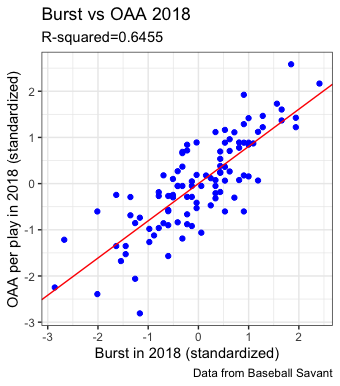 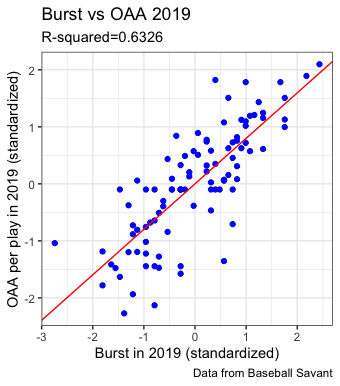 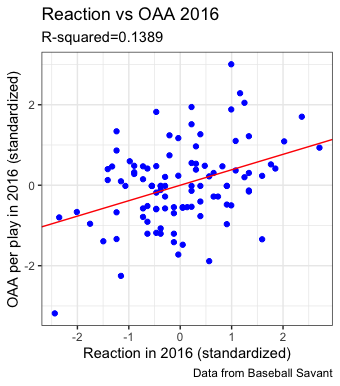 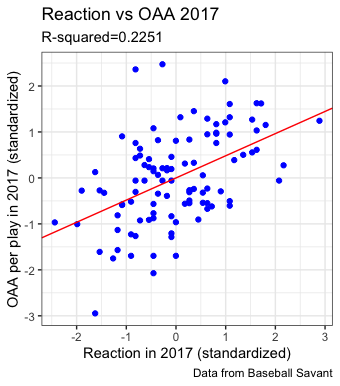 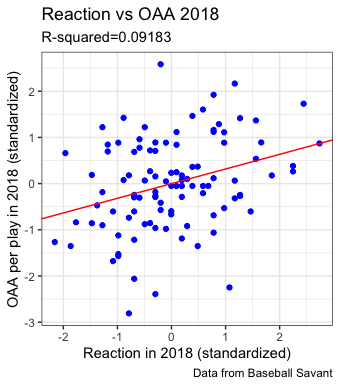 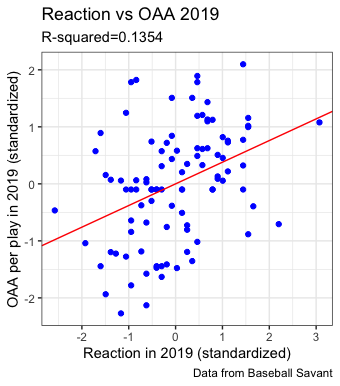 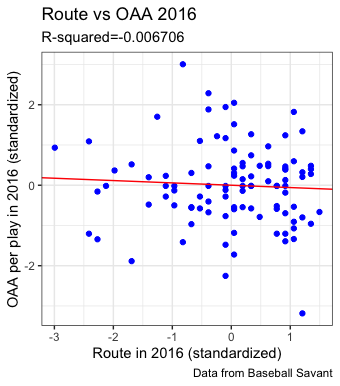 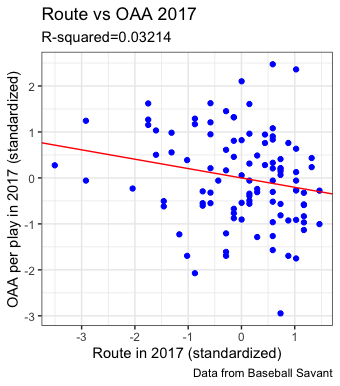 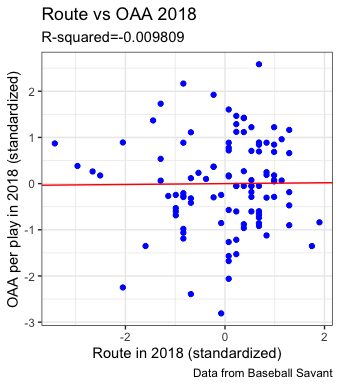 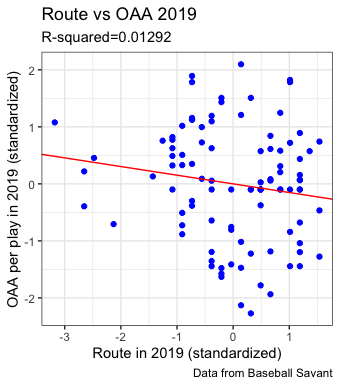 Interestingly, burst dominates the field here, as it is consistently an excellent indicator of overall tracking performance, while reaction lags far behind. On the other side, route, with its negative correlations and high p-values suggesting random variation, should never be used to estimate overall performance.

If any MLB outfielders who are looking to improve their tracking abilities are reading this, I urge you to train the muscles you use in the burst phase of jump. Don’t spend as much time on drills designed to improve reaction time, and don’t concentrate your efforts on studying batted ball trajectories to get a better understanding of your ideal routes. While you may see more improvement in that specific skill, you’ll see less improvement in when it comes to actually catching the ball. Instead, try to increase your speed. Refine your running technique, and do squats, lunges, and any other leg exercise so you can get faster. As a result of training what actually matters, you will perform better in the game.

All data updated as of September 14, 2019 and obtained from baseballsavant.mlb.com

Jake Federman is a current high school junior at the Horace Mann School in Bronx, NY. He will be interning at the Samford Center for Sports Analytics during this upcoming summer. Outside of sports analytics, Jake plays soccer and tennis, and is on his school’s math team.