The goal of every Major League Baseball (MLB) organization is to make money. While television contracts have become the primary revenue source for MLB teams, collectively generating approximately $4.3 billion in 2019 (Morss, 2019), teams still rely heavily on annual ticket sales (estimated at approximately $2.3 billion). Organizations construct a roster that fans want to watch and that will win. In the current age we live in, where so much communication and interaction occur online, it makes sense for MLB organizations to utilize social media as a means to build fan engagement and, hopefully, increase attendance. Fan engagement is defined as any deliberate interaction on the fan's part, meaning that something that was said made them want to spend their time and take an action to show their support. Higher levels of fan engagement mean more people are keeping up with their team. Twitter, the popular microblogging and social networking service, is one useful social media tool teams are using to engage with fans. As such, I sought a means to investigate the general research question: What influence does Twitter engagement have on MLB home attendance numbers?

It is common insight that home attendance increases the more the team wins (Glass, 2003). Similarly, one might expect that teams gain more Twitter followers the more they win. Furthermore, one might expect an increase in team interest on social media (e.g., more Twitter followers) to also be positively related to a subsequent increase in home attendance. In theory, fans showing more interest in the team are more likely to attend a game. If true, that would provide support for a MLB organization’s efforts in increasing their social media followers as a means to raise their attendance levels (and, therefore, revenues).

As winning has shown to be a positive indicator of attendance, I began the research by collecting winning percentages and home attendance data for each MLB team from 2010 to 2018 (ESPN.com). Using Statista.com, I also collected historical Twitter data for each MLB team over the same period, gathering the total number of followers at the end of the season. Recognizing the influence of roster construction on fan interest, several other common variables were collected for all MLB teams, including average MLB service time for the team’s opening day roster, total salary for the team’s opening day roster, and whether the team made the playoffs; these were identified as control variables for the model. As I was interested in the impact on seasonal attendance, I also calculated the change (from the prior season) in winning percentage, home attendance, and Twitter followers. A correlation table (below) of the variables of interest allowed me to explore the data initially. 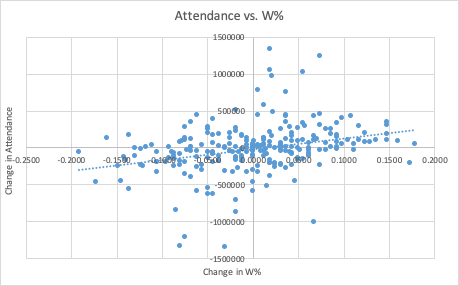 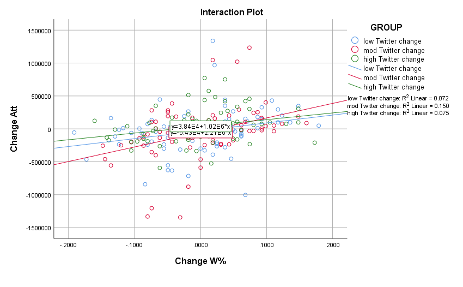 Does a team’s Twitter following lead to success at increasing attendance? My results suggest that an increase in Twitter followers does not have a direct effect on attendance increases. Yet, when combined with improvement on the field, social media engagement can, in fact, amplify home attendance. This offers substantive support for Twitter as a helpful tool to not only increase awareness of team and player success, but also have a positive impact on organizational revenues. Therefore, it may be helpful that teams increase efforts at social media engagement when the team is on winning streaks, as they may be able to maximize box office returns.

Carson Cupo is a senior Finance Major with a concentration in Data Analytics. He is in his 5th season as a pitcher with the Samford University baseball team.