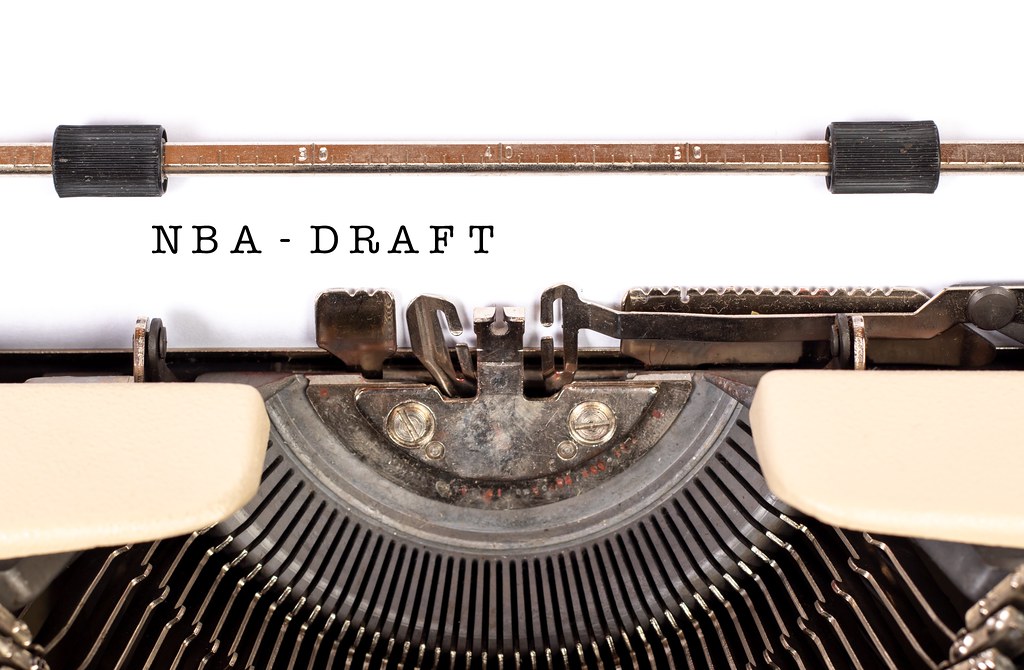 Money in the NBA

With lucrative TV deals and sponsorships, there is more money in the NBA now than ever before. Average NBA players today earn nearly 7 times more than in the early 90’s. Stephen Curry and Russell Westbrook are on 5-year deals worth over $200 million - James Harden, Kevin Durant and a handful of others are on 4-year deals worth over $150 million. Teams are even giving lucrative contracts to role players and unproven prospects.

Joe Ingles, a 32-year old role player on the Utah Jazz is on a one-year, $12.4 million deal despite only averaging 10 points a game. Similarly, Pascal Siakam, a first-year all-star on the Toronto Raptors, signed a 4-year, nearly $130 million contract this past offseason. The Raptors signed Siakam because of his potential. He was picked 27th in the draft, spent time in the NBA’s developmental league and did not average double-digit points until last year.

In addition to NBA Salaries, players are making more on endorsements and other off court deals too. Such as LeBron James, who makes $55 million annually from endorsements in addition to his NBA salary. However, due to limited data on NBA player endorsements, this article is going to just focus on salary data.

The Importance and Stakes of the NBA Draft

Top prospects have historically made their way to the NBA through three main avenues. They attend college, they play professionally overseas (or possibly in the NBA developmental league) or they attempt to enter the draft immediately after high school (only through post graduate institutions after 2005).

Each of these different options almost always ends with players entering the NBA Draft, as it is very difficult to get into the league through other means. The NBA Draft occurs annually, and NBA teams select top eligible prospects to join their teams. There are 2 rounds and 60 picks. Top picks get signed to multi-million-dollar rookie deals and are largely expected to have a meaningful role on the team. Late picks, on the other hand, are not even guaranteed a contract and often never even suit up for the team that drafted them.

This brings up several questions: is it good enough to just get drafted? How important is it to maximize your draft stock and be picked as high as you can? How should you face the tradeoff of entering the draft knowing you’ll get selected or choosing to wait a year to possibly become a lottery or higher pick?

A large rationale behind waiting a year to enter the draft and developing is that being a lottery pick (picks by non-playoff teams who receive draft positions through a lottery) and/or getting picked higher will earn a player more money in the long run. This relationship will be investigated in this analysis.

NBA Salary, draft and performance data on non-active first round picks from the 1990-91 to the 2017-2018 season was collected and cleaned into a cohesive dataset. From there, regression analyses examined what factors truly impacted a player’s career earnings (adjusted to 2018 USD) while taking fixed effects into account (draft year, team, executive, career length, draft age etc.).

The analysis found that whether a given player was a lottery pick, what pick they were selected at, the age they were drafted at and the amount of years a prospect spent in college all had significant effects on a player's career earnings. 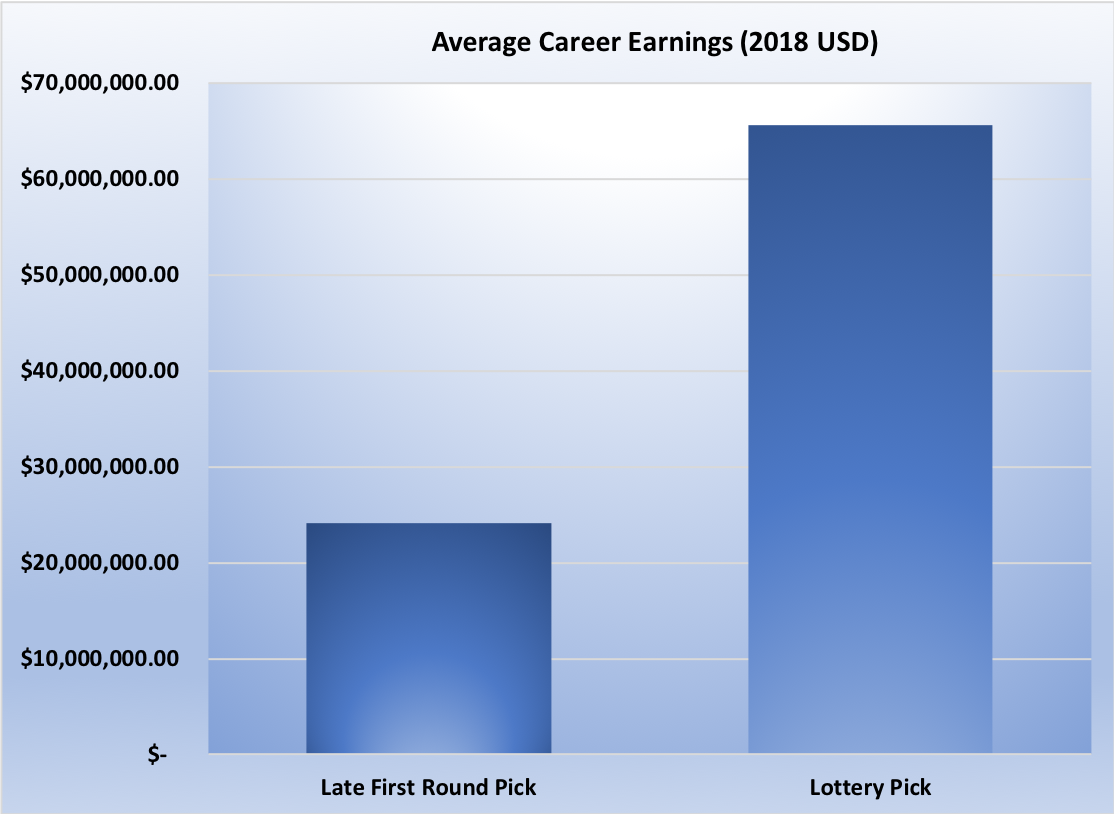 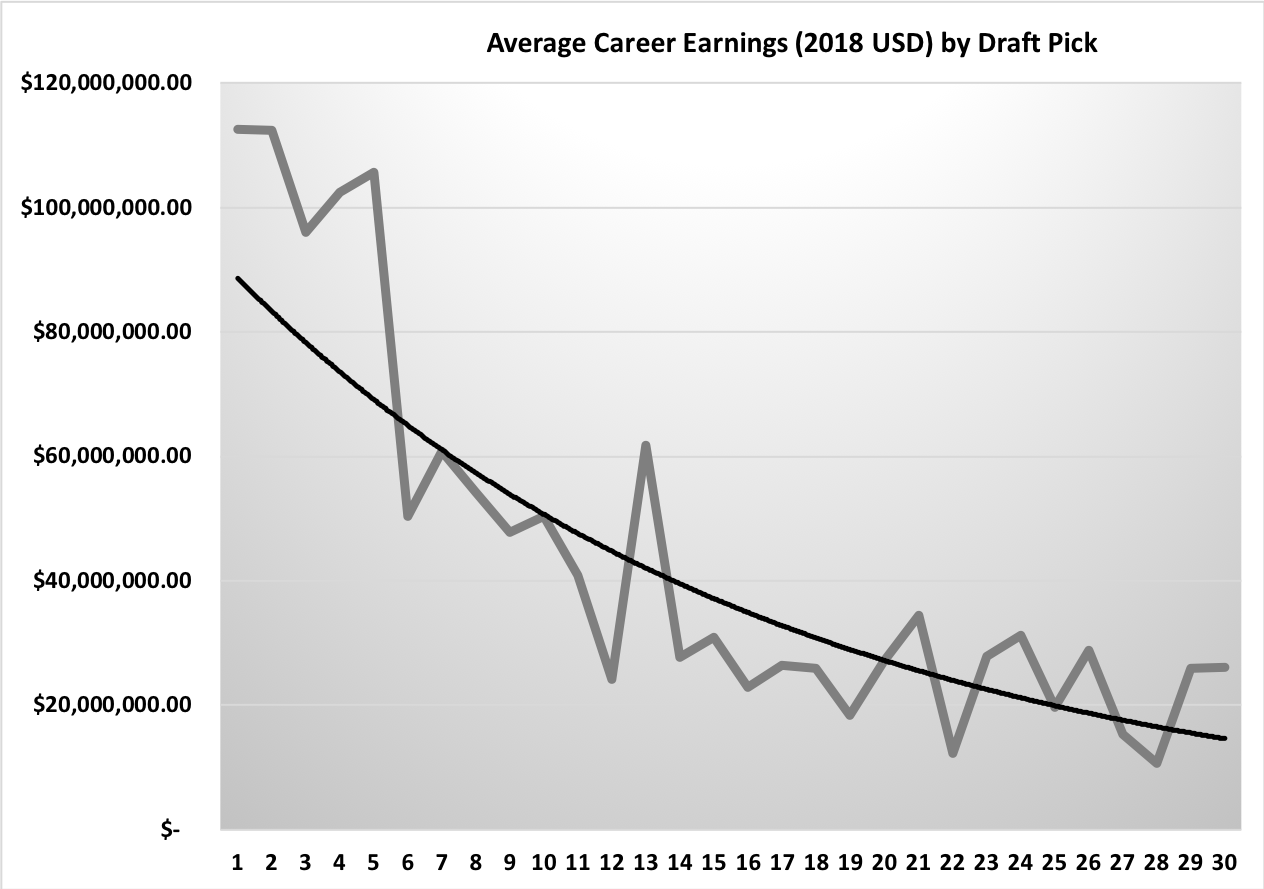 Players selected earlier earned more money over their careers as well. For each additional pick higher, a player tended to make 3% more career earnings, even when controlling for age. 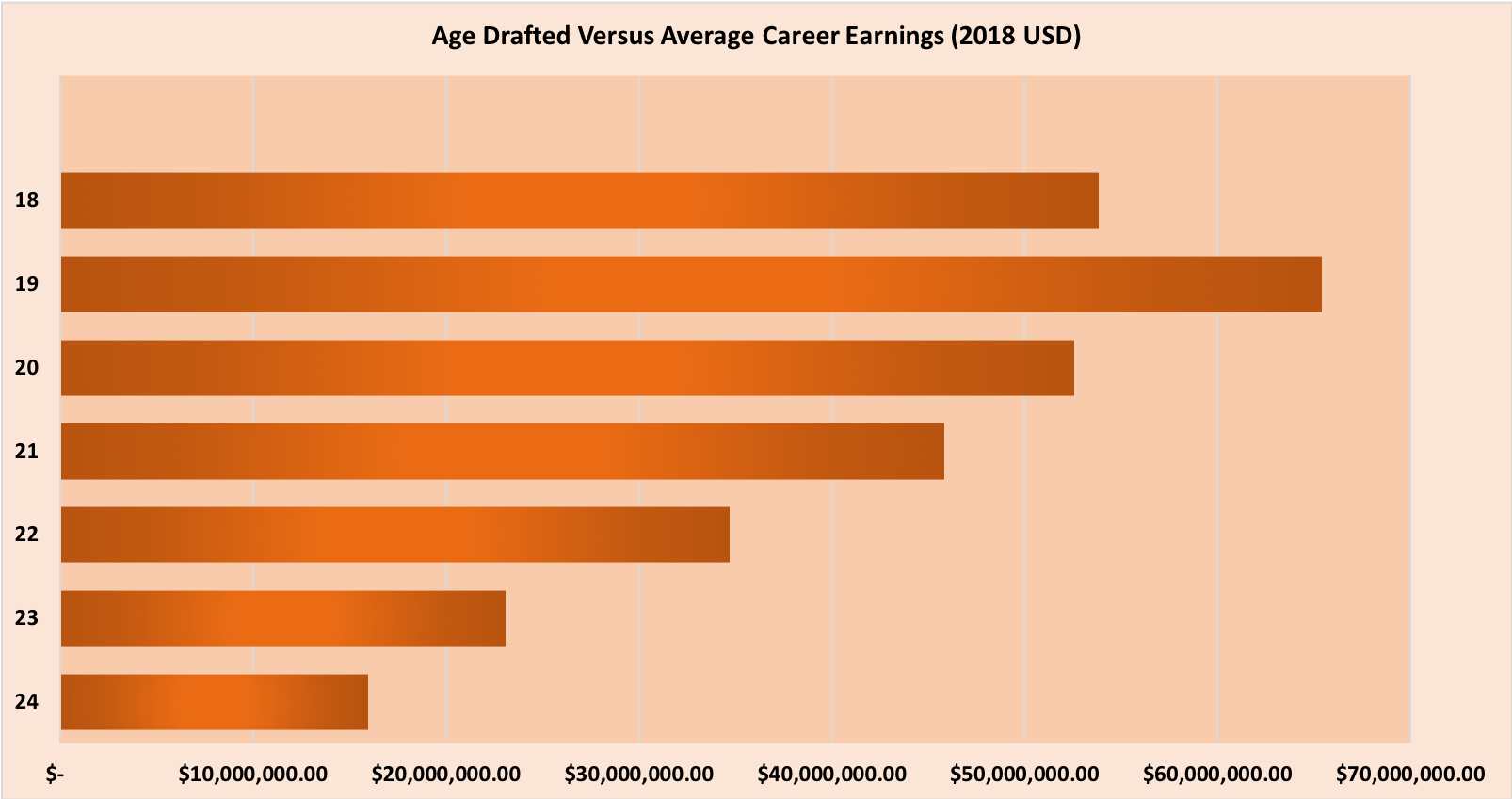 Further, each year a player spent in college correlated to 5% career earnings decrease from someone who spent a year less in college. 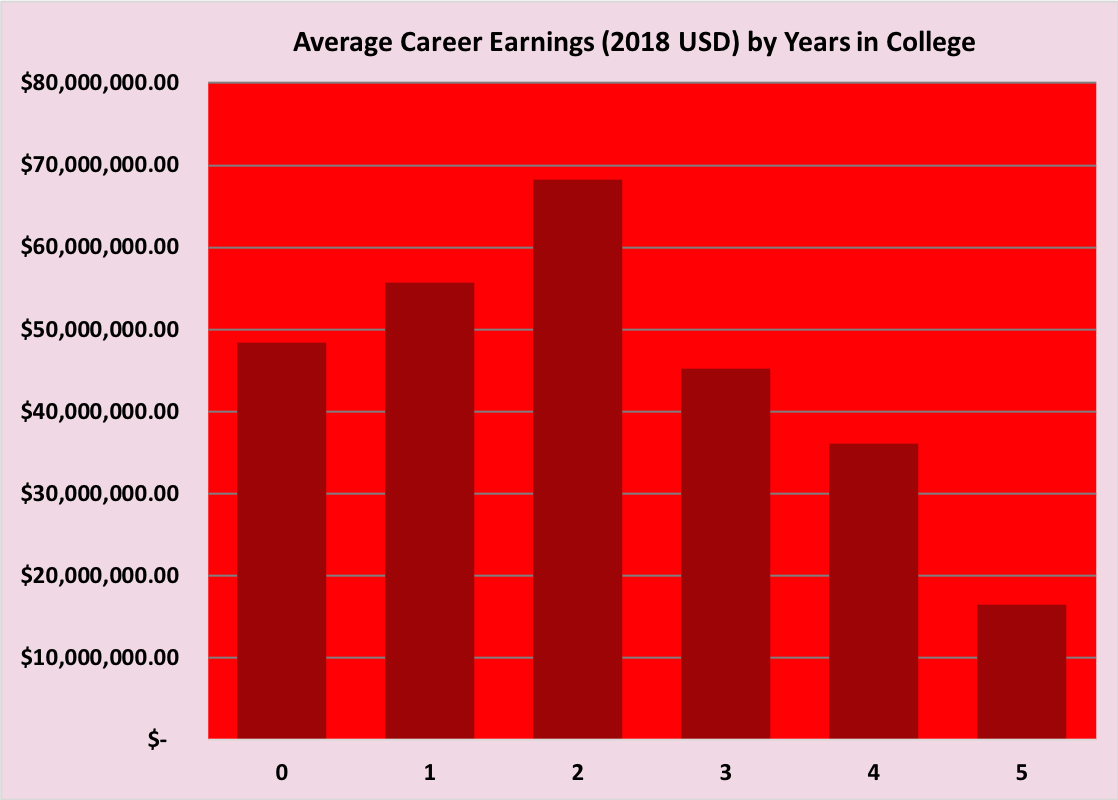 However, the amount that players earned increased from 0 to 1 and 1 to 2 years in college but falls dramatically after that. Building on this, the same relationship existed between years in college and average draft pick. Those who did not attend college were drafted at nearly as high picks as 4-year players. Those who attended college for one or two years were selected at much higher picks than the others.

This analysis suggests that lottery picks and those selected earlier do in fact earn more money than similar players picked just out of the lottery or later in the first round. So, on one hand, it is worth it to stay another year or attend college to build one's stock. But on the other hand, this depends on the certainty of them building their stock as well as their age, years spent in college and the numerous factors not included in the model. 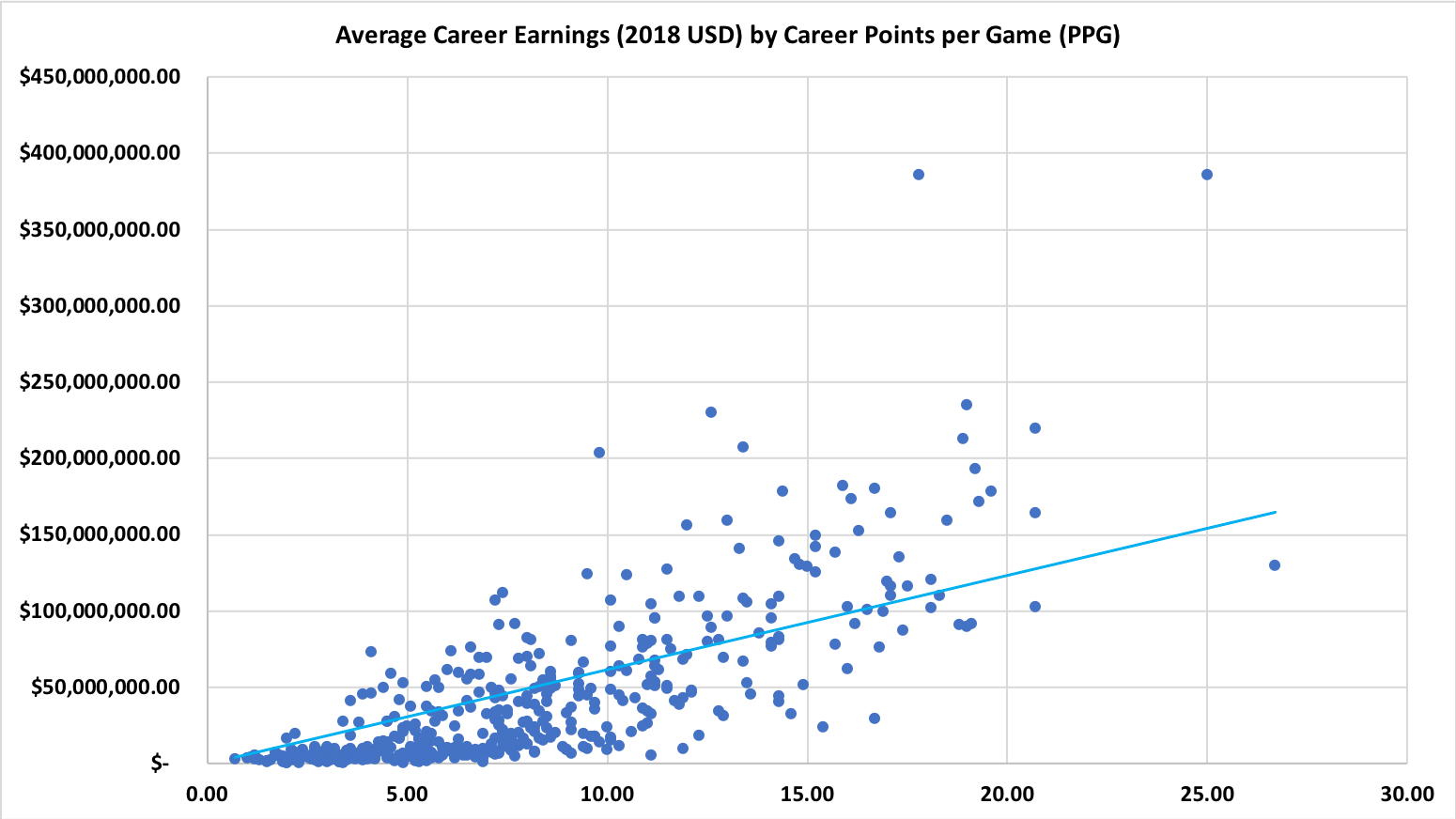 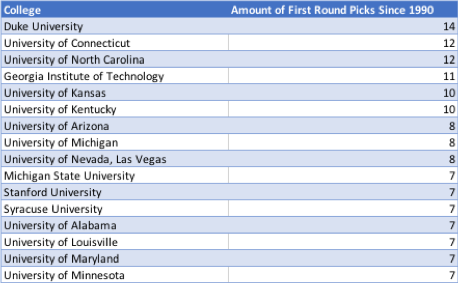 Not surprisingly, there is a strong positive relationship between points per game and career earnings (r=.69). Further, Duke University yielded the most non-active, first round picks since 1990 at 14, followed by the University of Connecticut and the University of North Carolina at 12. 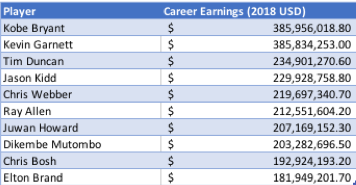 Kobe Bryant and Kevin Garnett were the two highest paid non-active players from 1990 to 2017-18 – both netting in upwards of $385 million. Bryant and Garnett entered the NBA directly out of high school and were picked in the lottery. The next highest paid players were Tim Duncan, Jason Kidd and Chris Webber, at $234, $229 and $219 million respectively. Duncan, Kidd and Webber each spent between 2 and 4 years in college but were selected in the lottery as well.

Zachary Stice, one of our interns, will be finishing his junior year at Grinnell College (IA) this spring. He majors in Economics, concentrates in Statistics, and is pursuing analytical careers in the sports industry – primarily in basketball and footwear.