“Tanking” is viewed as the scourge of the NBA today. It ruins the purity of the game, making fans more and more uninterested. Simply put, “tanking” in the NBA is when a franchise does less than everything it can to win. When a team is stuck in a cycle losing seasons, no playoff appearances, or multiple first round exits, these teams would tank in order to secure top draft picks and find that star player to get them over the hump. This thinking of “lose now, win later” dates back to the 1980s and is still in use today. The most recent tank job would be that of the 76ers which many titled “The Process”

One of the most notable tank jobs in NBA history was accomplished by the Philadelphia 76ers. After years of mediocrity and first-round playoff exits, the 76ers front office realized that in order to win big, a team’s roster must have at least one superstar who possesses a high Player Efficiency Rating (PER), which is the overall rating of a player's per-minute statistical production. “Trust the Process” is a mantra that all NBA fans are familiar with, it originated in 2013 when the 76ers began their extreme rebuild in order to find that star player. 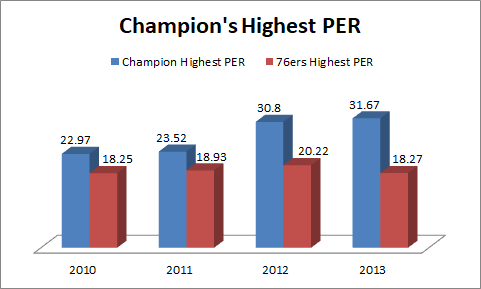 Unlike the Lakers or Celtics, Philadelphia was not a historically great franchise, which made it hard for them to attract star caliber players. Without the pieces to trade for a superstar or the historical success to attract them in free agency, the 76ers only way up was to secure top draft picks. At the time, the draft lottery was set up to where the worst teams were given the best chance at top picks. From 2013, we see the 76ers’ number of wins drop tremendously and the margin of loss increase, all in an attempt to secure top picks. 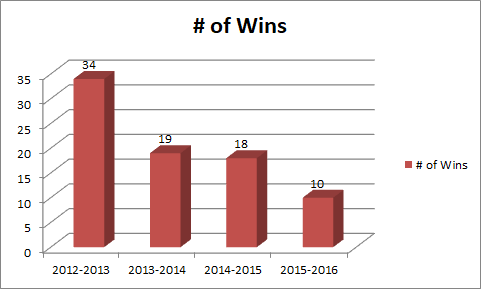 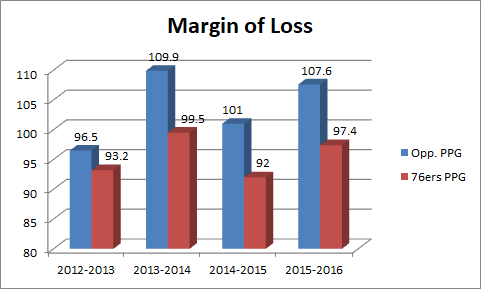 Sam Hinkie, the 76ers GM at the time, did not hesitate to start his notorious “process” in 2013. His first major decision as GM came on draft night when he traded all-star point guard Jrue Holiday for Nerlens Noel, an injured rookie. Holiday had the team’s highest usage rate of 26.6% and led the team in every statistical category. After trading him away, second-year player Tony Wroten took over after only playing 7.8 minutes per game the year prior. Wroten had a usage rate of 27.7% but did not lead the team in any statistical category. This exemplifies the 76ers strategy of lose now, win later. As years went on, the 76ers replaced their best players with no-names and their average PER remained far below the league average. 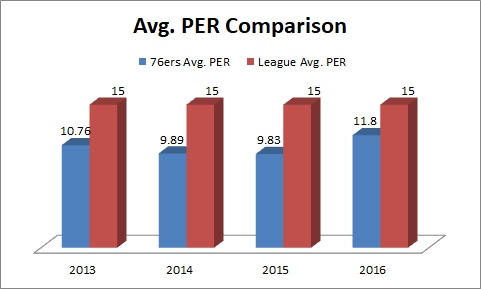 How It Affected The Franchise

Aside from ruining the brand of the NBA, tanking could also ruin the NBA from a financial standpoint. In an analysis across the 7 major sports, four “core expectations” were identified as most important when it comes to a fans’ experience at sporting events. We see that when attending professional sporting events, fans desire a high-quality game and they expect an exciting atmosphere within the stadium.

The fact of the matter is, watching a team tank does not bring an exciting atmosphere to the arena, nor does it make for a high quality game. This alone could directly affect ticket sales, lowering the revenue of a franchise. In the case of the Philadelphia 76ers, it did exactly that. The chart below shows the average attendance at 76ers home games one year prior to tanking, the three years they tanked, and one year after. We can clearly see the effect it had on the organization in 2014-2016 when average home attendance fell below 15,000 fans. 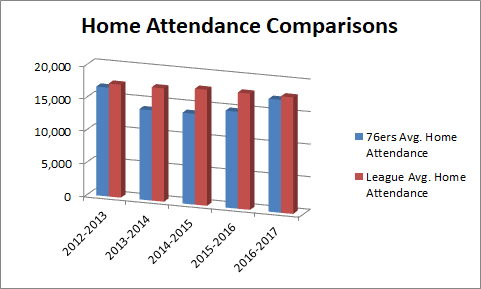 These losses in ticket sales are directly correlated with losses in franchise revenue. The NBA could make up these losses and discourage tanking by fining teams that intentionally lost games. The amount would vary from team to team, but generally would be the difference in ticket revenue of tanking years vs. competitive years. The problem with this is the league may have a hard time determining when teams are tanking, or if they’re just that bad.

It seems like any plan to completely terminate tanking also comes with adverse effects. Many executives believed that the latest draft reform would do away with the issue, but there are still signs of tanking today. The fact is, as long as bad teams are rewarded for being bad, they will continue to do so, at least until they are sure they will be good. The league has done a great job of limiting the effectiveness of tanking, but until drastic measures are taken, this “strategy” will continue to raise issues for the NBA community.