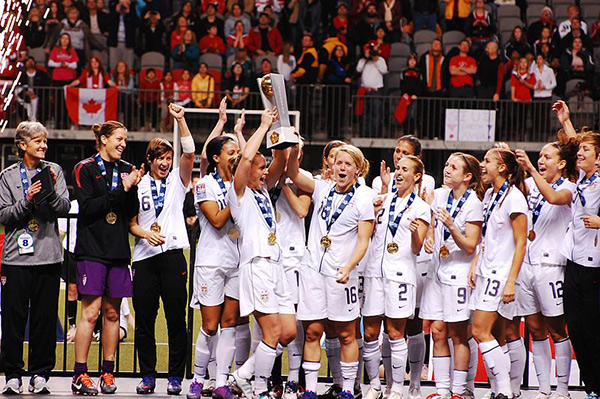 The U.S. Women’s National Team has dominated the soccer world for a long time. They have shown their dominance by winning four World Cups since 1991 and have never fallen below number 2 in FIFA’s Women’s rankings. There is no denying this team is talented, but with this much success people often ask the question ‘How does a team continue their success over decades?’

There are a lot of reasons the rest of the world has been playing catch up to the USWNT. These reasons include but are not limited to the USWNT use of soccer analytics, the number of female players registered in every confederation, and Title XI, the 1972 law that prohibits gender discrimination in federally funded educational programs.

There is no denying that Title IX which became a law in 1972 has a direct correlation the the USWNT continued success. This law evened the playing field for men’s and women’s sports. U.S. women’s soccer grew enormously. The National Federation of State High School Association has data reporting back before this law was in place. 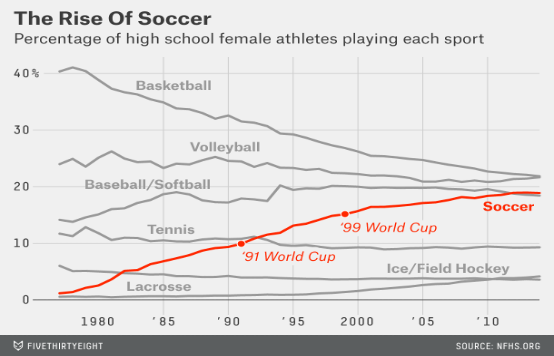 As you can see from the graph above and the numbers below, after Title IX was put in place soccer became one of the most popular sports for women. Once the USWNT grasped their first World Cup title in 1991 and again in 1999 the popularity growth behind this sport was inevitable.

The growth of women’s soccer in the US since 1971

As you can see ever since Title IX was in place soccer in the US had a competitive advantage relative to other countries. Europe has a strong fan base and passion behind the sport of soccer and has poured a lot of money into the game recently. In order for the USWNT to continue to dominate over competitors like Europe they have to find advantages where they can. Over the past few years soccer analytics has grown dramatically and that can be a huge advantage.

According to an article by Joe Lemire three hours before the USWNT defeated France in the World Cup semi-finals, match data compiled by OptaPro was sent to a U.S. Soccer server, run through scripted models on the AWS cloud, and converted into an advanced analysis automatically deposited into coaches’ inboxes. As you can see, the urgency of receiving data even just hours before a match can be very valuable to the coach and players.

Soccer analytics has a huge upside when it comes to player breakdown, team tendencies, discovering passing patterns, recruiting, and even game trends. Ben Mackriell, the head of OptaPro is impressed with the way the U.S. Soccer Federation is eagerly searching for the best quality data which is provided through their partnership with Opta. Sports analytics has been slower to catch on in the sport of soccer, even more specifically the women’s side of the game. With a U.S. Soccer research manager like Tyler Heaps who has direct contact with players and coaches and a team who has dominated the soccer world for 30 years there is no denying the analytics side of the game will continue to grow. The US Soccer Federation is ensuring they stay leading from the front of the pack in every aspect by even using analytics to track youth players for recruiting in later years.

Jakelourim. (2019, June 11). How Close Is The Rest Of The World To Catching The U.S.? Retrieved December 11, 2020, from https://fivethirtyeight.com/features/how-close-is-the-rest-of-the-world-to-catching-the-u-s/